‘With a gentleman I am always a gentleman and a half, and with a fraud I try to be a fraud and a half’…Otto von Bismark, Prussian statesman

[ Editor’s Note: Trump is out in left field on his Hail Mary pass to kill the Nordstream deal when Europe was fully invested in the project; and despite the feigned love for Ukraine, they did not want to take the chance of Ukraine or Poland doing something stupid to curtail supplies in the future.

Remember when Poland was broke and just started helping themselves to Russia’s gas? We knew that would have long term repercussions, and it did. And as for Ukraine, Russia now looks back on its shenanigans as “Screw me once, that’s on you; but screw me twice, it’s on me.”

We will see some hard bargaining in the run up to Ukraine’s transit contract running out on December 31st. It will be one hell of a poker game. The good side is most will be ready to put the long drawn out story behind them unless Trump sanctions the EU companies that are partnering with Nordstream 2. But we all know anything is possible with Mr. Trump… JD ] 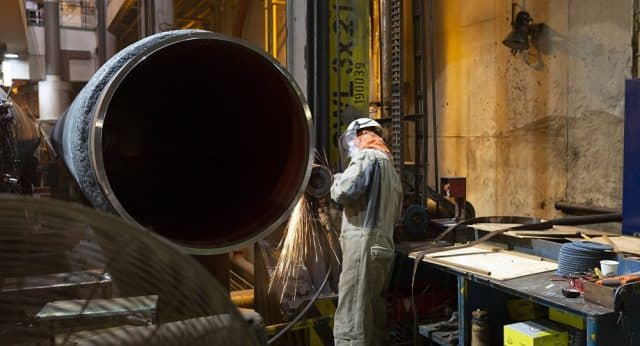 Nord Stream 2 got the green flag from the Danish government to connect with the landing station at Lubmin, Germany. The decision was melodramatic from the Danes, with a route just outside its territorial waters in an area considered safe from environmental concerns.

Denmark’s Energy Agency said it was “obliged to allow the construction of transit pipelines” under the UN Convention on the Law of the Sea.

While the champagne corks were flying at Gazprom in Russia, there was gnashing of teeth in the US. Trump said Nord Stream 2 would make Germany “a hostage of Russia”, in the usual mode of Trump overstatement.

Not everyone is happy with the deal

Thus ends some of the controversy for now, with US attempts to kill the pipeline having thrown everything but the kitchen sink in the way of its completion. That included a direct threat from the number one sanctionista, Mr. Trump, who said that all the European companies involved would face US sanctions.

Trump already was holding a general sanctions sword over Europe with his campaign promise to rebalance EU-US trade. European companies were heavily invested in the land construction part of the project and distribution, so Trump thought he had a lot of leverage.

Although some understood Trump’s thinking the EU should be obliged to buy US LNG at whatever price to show good faith that it would cooperate in reducing the US trade imbalance, EU countries did not look at that as a feasible strategy with the EU’s sluggish economic growth.

The Trump threat baton seems to have been passed to the DOE now.

“The Department of Energy strongly believes that the Nord Stream 2 threatens the energy security and national security of U.S. allies in Europe [and] strengthens Russia’s control over the region’s energy supply,” said a DOE spokesperson, speaking on background. “The United States will continue to look into all tools at its disposal regarding this project… All options are on the table.”

Ukraine was next in line with being unhappy, with Zelensky stating, “This is not only a matter of energy security, it is a geopolitical issue,”… the deal “strengthens Russia and weakens Europe.” It seems Mr. Zelensky has taken a lesson from Trump, that other countries should do their bidding. “We understood this could happen”, he said in Kiev.

Lurking in the background for Mr. Z is Ukraine’s gas transit contract expiring at the end of the year, with not much time left to negotiate a new deal. Ukraine and Poland have been in full hostile mode, both having held the transit pipeline hostage or abused it in the past, which is something that corporate media seems to have erased from its memory banks.

Eastern Europe is concerned with the Turkish-Russian pipeline eventually heading to Southern Europe, as it could find itself losing the valuable gas transit fees via the Ukraine route. They are crying crocodile tears, as they only have their own Russo-phobia to blame for the current hostilities, with Poland having cooperated with NATO’s march to Russia’s western border.

We must not forget that the current Ukrainian government was the result of the murderous US-backed Maidan coup, where imported snipers shot both police and protesters, and where Julia Tymoshenko was phone-tapped saying she wanted to nuke Donbass and then nuke Russia. With neighbors like this, who needs enemies?

A transit deal of some sort will be worked out with Ukraine. The EU is supporting negotiations, but the price details have yet to be worked out; and Russia would like to add in the $3-billion debt from the Stockholm arbitration for a package deal. Both countries realize that disruption of energy supplies would hurt both of their reputations as reliable suppliers and transit countries.

The Deal that almost never was

Nord Stream 2 will be remembered for its trial by fire. The EU was jammed up politically on approving the deal, and it was Angela Merkel that came to the rescue. She could not do it without Macron, so they worked out an “anti-monopoly” solution where, once the gas landed in Germany, it would come under the EU regulations for distribution, the key demand for detractors.

There were concerns that without that regulation control, Gazprom could charge countries that had been hostile to Russia more than those who had been friendly. But that turned out to be a false concern, as Russia accepted EU distribution regulation and the EU holdouts were comfortable.

Nord Stream gas could be flowing in early 2020

Because the German land part of the pipeline is already completed, it is expected that gas will be flowing through early next year. That said, Europe’s gas storage has been filled to capacity in anticipation of Nord Stream 2 delays, so the first shipments will come at a time of oversupply and some of the lowest gas prices in many years.

And it could not happen at a better time. The EU is looking at an overall weak growth rate of 1.2% this year. Germany was at 0.4% on the late summer third quarter numbers. An oversupply of gas has prices lower than in a long time, or these growth numbers would be even lower.

The EU is juggling with Boris Johnson’s dancing Brexit deal, where both sides are weary; the wise men on both sides do not want to see a hard Brexit which will hurt both.

The EU leadership needs the Nord Stream deal to show that it has at least been able to stabilize the EU energy supply for years to come. Russia seems to be happy to deliver at low prices as a win-win for both sides and to make US LNG less attractive.

What is Trump going to do now?

Many in the US could never understand how Trump thought that he could sell the more expensive LNG when the EU did not have the infrastructure set up to handle it, and Trump seemed tone deaf to the issue of why EU customers would want to pay a premium for US gas.

All I can think of is that he thought he could roll the EU buying US LNG into an overall trade deal, similar to what he is doing with the Chinese in the soon to be signed stage one part of that deal. China will commit to buying $50 billion a year in US agricultural products. Trump hopes he can parlay this deal into enough votes from Mid-west farmers to win a second presidential term and avoid prosecution over some of his legal problems.

The US will still be looking for ways to make trouble for Nord Stream and the EU, as it likes to be able to show that those that resist US unipolarism do not fare well. Will it sanction the EU Nord Stream partner countries? What would the EU do if it did? We will all have to wait for those answers.

But who knows? With the US in the middle of an impeachment process, the Trump regime may have better things to spend its time on.