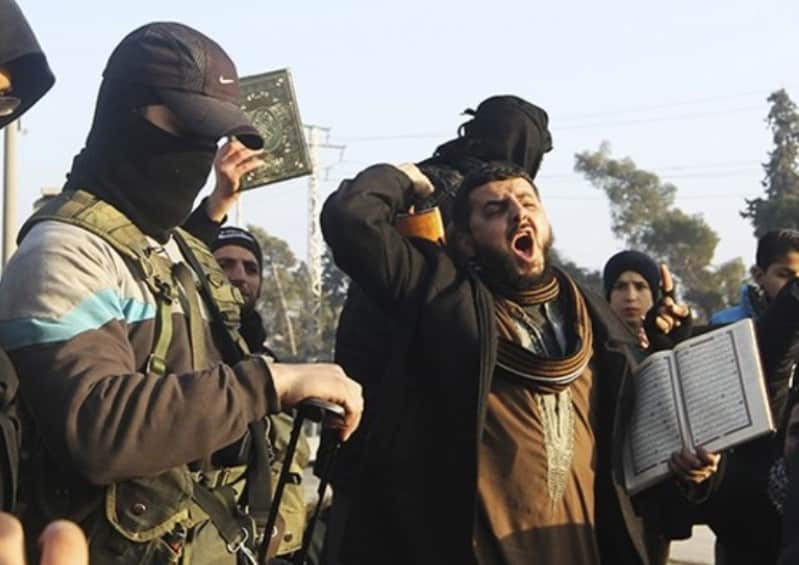 It suited the economic interests of the oil-rich Gulf countries to maintain and strengthen a supplier-consumer relationship with the capitalist bloc. Now the BRICS countries are equally hungry for the Middle East’s energy, but it’s a recent development. During the Cold War, an alliance with the industrialized world was predicated upon the economic interests of the Gulf states, which was given a religious color of purportedly “anticommunist” Islamist ideology by the Salafist preachers of Saudi Arabia.

All the celebrity terrorists, whose names are now heard in the mainstream media every day, were the spawns of the Soviet-Afghan War: including Osama bin Laden, Ayman al Zawahiri, the Haqqanis, the Taliban, the Hekmatyars etc. But that war wasn’t limited only to Afghanistan. The alliance between the Western powers and their regional client states during the Cold War funded, trained, armed and internationally legitimized the Islamic jihadists all over the Islamic World. We hear the names of jihadist groups operating in regions as far afield as the Central Asian States, the North Caucasus and even in Bosnia and Kosovo in the Balkans.

Regarding the objectives of the Soviet invasion of Afghanistan in December 1979, then American envoy to Kabul, Adolph “Spike” Dubs, was assassinated on the Valentine’s Day, on 14 Feb 1979, the same day that Iranian revolutionaries stormed the American embassy in Tehran.

The former Soviet Union was wary that its forty-million Muslims were susceptible to radicalism, because Islamic radicalism was infiltrating across the border into the Central Asian States from Afghanistan. Therefore, the Soviet Union invaded Afghanistan in December 1979 in support of the Afghan communists to forestall the likelihood of Islamist insurgencies spreading to the Central Asian States bordering Afghanistan.

According to documents declassified by the White House, CIA and State Department in January, as reported [1] by Tim Weiner for The Washington Post, the CIA was aiding Afghan jihadists before the Soviet Union invaded Afghanistan in 1979. President Jimmy Carter signed the CIA directive to arm the Afghan jihadists in July 1979, whereas the former Soviet Union invaded Afghanistan in December the same year.

The revelation doesn’t come as a surprise, though, because more than two decades before the declassification of the State Department documents, in the 1998 interview [2] to The Counter Punch Magazine, former National Security Advisor to President Jimmy Carter, Zbigniew Brzezinski, confessed that the president signed the directive to provide secret aid to the Afghan jihadists in July 1979, whereas the Soviet Army invaded Afghanistan six months later in December 1979.

Here is a poignant excerpt from the interview. The interviewer puts the question: “And neither do you regret having supported the Islamic jihadists, having given arms and advice to future terrorists?” Brzezinski replies: “What is most important to the history of the world? The Taliban or the collapse of the Soviet empire? Some stirred-up Moslems or the liberation of Central Europe and the end of the Cold War?”

Despite the crass insensitivity, one must give credit to Zbigniew Brzezinski that at least he had the courage to speak the unembellished truth. It’s worth noting, however, that the aforementioned interview was recorded in 1998. After the 9/11 terror attack, no Western policymaker can now dare to be as blunt and forthright as Brzezinski.

Regardless, that the CIA was arming the Afghan jihadists six months before the Soviets invaded Afghanistan has been proven by the State Department’s declassified documents; fact of the matter, however, is that the nexus between the CIA, Pakistan’s security agencies and the Gulf states to train and arm the Afghan jihadists against the former Soviet Union was forged years before the Soviet invasion of Afghanistan.

Pakistan joined the American-led, anticommunist SEATO and CENTO regional alliances in the 1950s and played the role of Washington’s client state since its inception in 1947 as a former colony of the British Empire. So much so that when a United States U-2 spy plane was shot down by the Soviet Air Defense Forces while performing photographic aerial reconnaissance deep into Soviet territory, Pakistan’s then President Ayub Khan openly acknowledged the reconnaissance aircraft flew from an American airbase in Peshawar, a city in northwest Pakistan.

Historically, Pakistan’s military first used the Islamists of Jamaat-e-Islami as proxies during the Bangladesh war of liberation in the late 1960s against the Bangladeshi nationalist Mukti Bahini liberation movement of Sheikh Mujib-ur-Rahman – the father of current prime minister of Bangladesh, Sheikh Hasina Wajed, and the founder of Bangladesh, which was then a province of Pakistan and known as East Pakistan before the independence of Bangladesh in 1971.

Jamaat-e-Islami is a far-right Islamist movement in Pakistan, India and Bangladesh – analogous to the Muslim Brotherhood political party in Egypt and Turkey – several of whose leaders have recently been imprisoned and executed by the Bangladeshi nationalist government of Prime Minister Sheikh Hasina Wajed for committing massacres of Bangladeshi civilians on the orders of Pakistan’s military during the Bangladesh war of liberation.

Then during the 1970s, Pakistan’s then Prime Minister Zulfikar Ali Bhutto began aiding the Afghan Islamists against Sardar Daud’s government, who had toppled his first cousin King Zahir Shah in a palace coup in 1973 and had proclaimed himself the president of Afghanistan.

Sardar Daud was a Pashtun nationalist and laid claim to Pakistan’s northwestern Pashtun-majority province. Pakistan’s security establishment was wary of his irredentist claims and used Islamists to weaken his rule in Afghanistan. He was eventually assassinated in 1978 as a consequence of the Saur Revolution led by the Afghan communists.

Pakistan’s support to the Islamists with the Saudi petro-dollars and Washington’s blessings, however, kindled the fires of Islamist insurgencies in the entire region comprising Afghanistan, Pakistan, the Soviet Central Asian States, and even in the Indian-administered Kashmir.

Regarding the Kashmir dispute, there can be no two views that the right of self-determination of Kashmiris must be respected in accordance with the UN Security Council resolutions on the right of plebiscite to the Kashmiri people, and the international community must lend its moral, political and diplomatic support to the Kashmiri people. But at the same time, the militarization of any dispute, including Kashmir, must be avoided due to human suffering that militancy and wars anywhere in the world inevitably entail.

The insurgency in Kashmir erupted in the fateful year 1984 of the Orwellian-fame when the Indian armed forces surreptitiously occupied the whole of Siachen glacier, including the un-demarcated Pakistani portion, on the Pakistan-India border in Kashmir.

Now, we must keep the backdrop in mind: those were the heydays of the Cold War and Pakistan army’s proxies, the Afghan jihadists, were triumphantly waging a guerrilla warfare during the Soviet-Afghan War in the 1980s, and the morale of Pakistan’s military’s top brass was touching the sky.

In addition, Pakistan’s security establishment wanted to inflict damage to the Indian armed forces to exact revenge for the dismemberment of Pakistan at the hands of India during the Bangladesh War of 1971, when India provided support to Bangladeshi nationalists and took 90,000 Pakistani soldiers as prisoners of war after Pakistan’s defeat in the Bangladesh war of liberation.

All the military’s top brass had to do was to divert a fraction of its Afghan jihadist proxies toward the Indian-administered Kashmir to kindle the fires of insurgency. Pakistan’s security agencies began sending jihadists experienced in the Afghan asymmetric warfare across the border to the Indian-administered Kashmir in the late 1980s; and by the early 1990s, the Islamist insurgency had engulfed the whole of Jammu and Kashmir region.

[2] Brzezinski Interview: How Jimmy Carter and I Started the Mujahideen: