EU, signatories react to Iran’s new step away from JCPOA

[ Editor’s Note: The EU signatories continue their weaseling out of the JCPOA with their constant refrain that Iran must abide by the deal to keep it alive, but giving themselves a free pass not to.

One of the main problems is there seems to be no domestic political pressure on Britain, France or Germany to live up to their obligations. Unsaid in this three-ring circus is that they can’t be expected to adhere to the agreement, due to the threat of US sanctions.

For them to take this stance and still consider themselves world powers is a bad joke. But if their respective populations don’t care, then they all can join hands and welcome Iran into the nuclear weapons club, along with Israel, which none of the three – the US, or Russia or China – seem to have any problem with.

So who is the biggest charlatan? It certainly is not Iran; when the deal goes down the tubes and the Israeli-controlled media puts the blame at Iran’s feet, who is going to protest?

The EU signers have publicly revealed their acceptance to being new US colonies, but with a dress on to hide the obvious fact. Due to their rolling over on the JCPOA, will the US go easier on them in the trade negotiations or press harder, as they have shown themselves to be weak? I am betting on the latter, the safer bet… Jim W. Dean ] 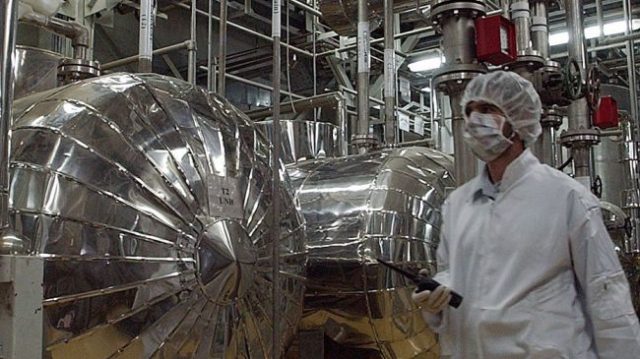 The European Union and signatories to a 2015 deal on the Iranian nuclear program have reacted to Tehran’s decision to take a fourth step in scaling back its commitments under the agreement in reciprocation for Washington’s withdrawal.

Iranian President Hassan Rouhani said on Tuesday that the country will start injecting uranium gas into centrifuges at the Fordow enrichment facility on Wednesday, in the fourth step Tehran is taking away from the multinational nuclear deal, officially known as the Joint Comprehensive Plan of Action (JCPOA).

In a speech broadcast live on TV, Rouhani said the Atomic Energy Organization of Iran (AEOI) will be ordered to begin the gas injection process at the Fordow nuclear facility — where 1,044 centrifuges are installed — under the supervision of the International Atomic Energy Agency (IAEA).

Later in the day, Iran’s Ambassador to the IAEA Kazem Gharib Abadi said the country has informed the UN nuclear agency about its decision to inject UF-6 gas into centrifuges at the Fordow nuclear facility.

Gharib Abadi added that in a letter to the IAEA that Iran requested the presence of the agency’s inspectors at the facility on Wednesday to supervise the process. A day earlier, Tehran had officially started injecting gas into advanced IR-6 centrifuges at Natanz Nuclear Facility.

The European Union on Tuesday expressed its concern over Iran’s new commitment reductions, warning that it is getting harder to save the nuclear accord, whose fate remains in doubt since Washington withdrew from it and re-imposed tough economic sanctions against Tehran.

EU spokeswoman Maja Kocijancic said it was becoming “increasingly difficult” to preserve the JCPOA, adding the bloc — which chaired the negotiations in the lead-up to the agreement— remained committed to the document, but it depended on “full compliance” from Iran.

“We are concerned by President Rouhani’s announcement today to further reduce Iran’s commitments under the JCPOA,” Kocijancic told reporters.

She added, “We urge Iran to reverse all activities that are inconsistent with its commitments under the JCPOA and to refrain from any further measures that would undermine the preservation and full implementation of the nuclear deal.”

In response to Washington’s withdrawal, Tehran has so far rowed back on its nuclear commitments three times in compliance with Articles 26 and 36 of the JCPOA, stressing that its retaliatory measures will be reversible as soon as Europe finds practical ways to shield the mutual trade from the US sanctions.

Tehran complains that the three European signatories to the nuclear accord— France, Britain and Germany – have failed to take practical strides to compensate for the US’s absence.

The Kremlin also said that it was concerned by Iran’s reciprocal measures, but emphasized that Russia would like the nuclear deal to remain in place. Russian President Vladimir Putin’s spokesman Dmitry Peskov said Moscow is “monitoring the development of the situation with concern.”

“The dismantling of the Joint Comprehensive Plan of Action does not bode well, of course,” he said. “We support the preservation of this deal.”

He emphasized that Moscow understood Tehran’s concerns over the “unprecedented and illegal sanctions” against the country.

France, in turn, urged Iran to reverse its decision to resume uranium enrichment, saying the move would be a breach of the JCPOA.

“The announcements by Iran… go against the Vienna agreement,” the French foreign ministry said in a statement. “We urge Iran to go back on its decisions which contradict the accord,” it added.

The ministry said that it was “deeply worried” by Iran’s latest steps and would await reports from the UN nuclear agency.

It reaffirmed France’s commitment to the nuclear deal and called on Iran to adhere to its obligations and fully cooperate with the IAEA.

“France remains entirely engaged to work for a de-escalation of tensions. A return to full compliance with the accord is one of the key objectives of this process,” the statement said.