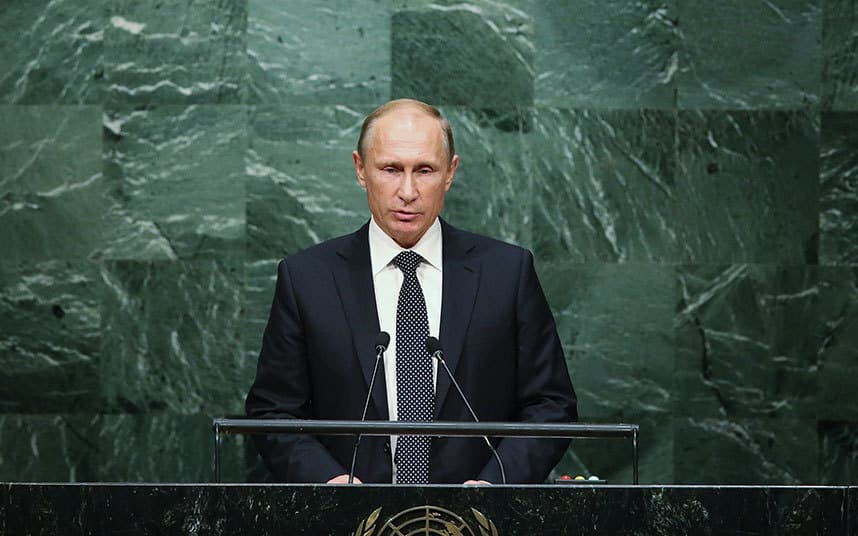 
In 2015, Vladimir Putin was asked by an interviewer to explain why “the countries that used to be parties to the Warsaw Treaty and today are NATO countries, such as the Baltic states and Poland, feel threatened by Russia. NATO has decided to create special forces to address these concerns. My question is whether the West is right in its determination to restrain ‘the Russian bear’, and why does Russia continue to speak in such a contentious tone?”

Putin must have been thinking, “The Lord hath delivered thee into my hands.” If you have spent time watching some of the interviews that Putin has done over the years, you know that he usually takes the premises of the New World Order by the horn and swings them back to their masters. This moves often kills those NWO agents politically and intellectually because those people, sad to say, cannot or does not want to think rationally. They deliberately abandon or dismiss practical reason and somehow expect to make sense in the political universe.

Putin has survived the New World Order onslaught because he is focused, and his distractors are not. He knows that the worldview that makes up the New World Order is philosophically incoherent and morally repugnant and worthless. He also knows that his job as a political figure is to articulate the truth in a manner that any rational person will understand, and truth will work itself out.

Putin was an admirer of the late Alexander Solzhenitsyn, who postulated quite rightly that truth will triumph in the end. It was Solzhenitsyn who said forcefully: “Our way must be: Never knowingly support lies! Having understood where the lies begin—step back from that gangrenous edge! Let us not glue back the flaking scales of the Ideology, not gather back its crumbling bones, nor patch together its decomposing garb, and we will be amazed how swiftly and helplessly the lies will fall away, and that which is destined to be naked will be exposed as such to the world.”[1]

So it seems that Putin finds it entertaining to put New World Order agents out of existence in the political world. He exposes them for what they really are: Satanists, people who want nothing to do with logic and reason and want to bring down the moral and political order. His response to the interviewer bears repeating here:

“We have the remnants of our armed forces (since Soviet times) in Tajikistan, on the border with Afghanistan, which is an area where the terrorist threat is particularly high.

“The same role is played by our airbase in Kyrgyzstan; it is also aimed at addressing the terrorist threat and was set up at the request of the Kyrgyz authorities after a terrorist attack perpetrated by terrorists from Afghanistan on Kyrgyzstan.

“We have dismantled our bases in various regions of the world, including Cuba, Vietnam, and so on. This means that our policy in this respect is not global, offensive or aggressive. I invite you to publish the world map in your newspaper and to mark all the US military bases on it. You will see the difference.

“American submarines are on permanent alert off the Norwegian coast; they are equipped with missiles that can reach Moscow in 17 minutes. But we dismantled all of our bases in Cuba a long time ago, even the non-strategic ones. And you would call us aggressive?”

Russia has indeed a base in Syria, but it is necessary. They need to keep the United States in check there.

Obviously the Neocons and the Powers That Be didn’t want to listen then. In fact, for Putin to reason with them was like talking to an ATM machine. They would usually preface their remarks by saying things like, “Vladimir Putin, the former KGB…”

2016 was the year in which this “KGB” mantra became the cornerstone of Zionist or Neocon discourse. It was in 2016 that Politico put out an article titled: “Vladimir Putin resurrects the KGB.”[2] Other outlets such as the Washington Post repeated the same thing over and over again as if constant repetition was somehow a substitute for rational thought.[3]

But Putin again was not on the wrong side of history; his distractors were. In fact, the evidence supported what he was saying about US military bases virtually all over the world. Linda J. Bilmes of Harvard and Michael D. Intriligator of the University of California presented a paper in which they argued that

“Today US military operations are involved in scores of countries across all the five continents. The US military is the world’s largest landlord, with significant military facilities in nations around the world, and with a significant presence in Bahrain, Djibouti, Turkey, Qatar, Saudi Arabia, Kuwait, Iraq, Afghanistan, Kosovo, and Kyrgyzstan, in addition to long-established bases in Germany, Japan, South Korea, Italy, and the UK. Some of these are vast, such as the Al Udeid Air Force Base in Qatar, the forward head- quarters of the United States Central Command, which has recently been expanded to accommodate up to 10,000 troops and 120 aircraft.

“The US Central Command (CENTCOM) is active in 20 countries across the Middle Eastern region, and is actively ramping-up military training, counterterrorism programs, logistical support, and funding to the military in various nations.

Tell me: has Russia been involved in “military operations across all the five continents”? Do they have military bases virtually all over the world? Serious scholars know that Putin’s political position is far more plausible than the worldview that has been propounded by the United States and NATO.

For example, military historian and academic Andrew J. Bacevich, who doesn’t even like Putin, has argued that NATO and the United States violated virtually every major agreement they made with Russia during the Cold War.[4] Stephen F. Cohen of Princeton and New York University has been saying similar things.[5]

In short, Putin is right when he denounces the New World Order and its agents. Let’s just hope that he keeps humiliating them throughout this year.

This article was first published in the winter of 2018.