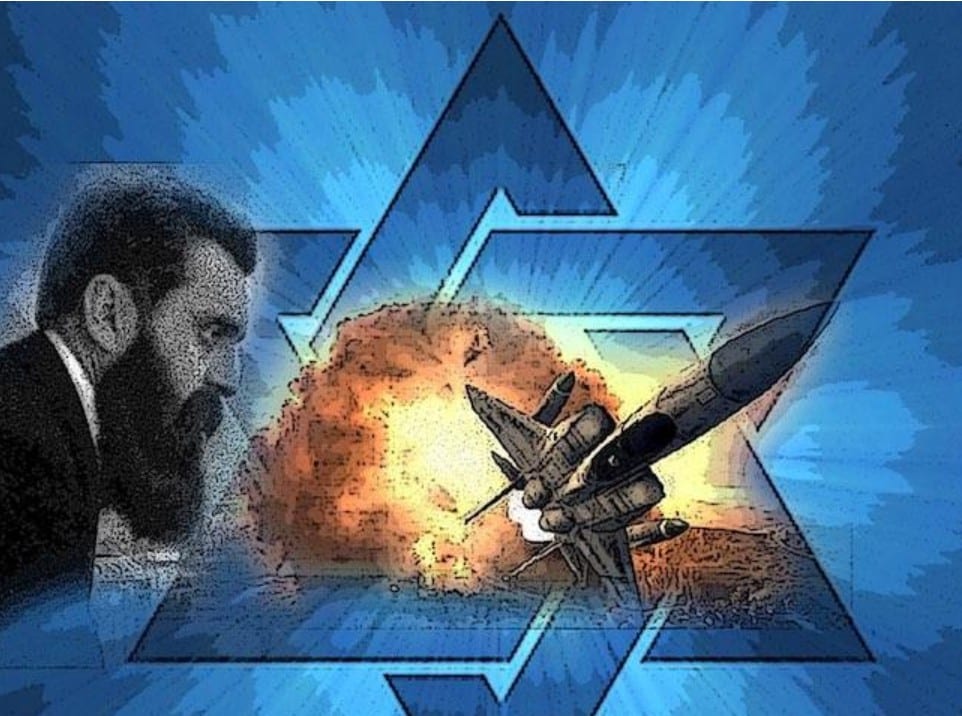 In my 2011 book, The Wandering Who, I elaborated on the possible disastrous scenario in which Israel is the nucleus of a global escalation over Iran’s emerging nuclear capabilities. I concluded that Israel’s PRE Traumatic Stress Syndrome (PRE-TSS) would be central to such a development.  “The Jewish state and the Jewish discourse in general are completely foreign to the notion of temporality. Israel is blinded to the consequences of its actions, it only thinks of its actions in terms of short-term pragmatism. Instead of temporality, Israel thinks in terms of an extended present.”

In  2011 Israel was still confident in its military might, certain that with the help of America or at least its support, it could deliver a mortal military blow to Iran. But this confidence has diminished, replaced by an existential anxiety that might well be warranted. For the last few months, Israeli military analysts have had to come to terms with Iran’s spectacular strategic and technological abilities. The recent attack on a Saudi oil facility delivered a clear message to the world, and in particular to Israel, that Iran is far ahead of Israel and the West. The sanctions were counter effective: Iran independently developed its own technology.

Former Israeli ambassador to the US, and prolific historian, Michael Oren, repeated my 2011 predictions this week in the Atlantic and described a horrific scenario for the next, and likely last, Israeli conflict.

Oren understands that a minor Israeli miscalculation could lead to total war, one in which missiles and drones of all types would rain down on Israel, overwhelm its defences and leave Israeli cities, its economy and its security in ruins.

Oren gives a detailed account of how a conflict between Israel and Iran could rapidly descend into a massive “conflagration” that would devastate Israel as well as its neighbours.

In Israel, the term “The War Between the Wars,”  refers to the targeted covert inter-war campaign waged by the Jewish State with the purpose of postponing, while still preparing for, the next confrontation, presumably with Iran. In the last few years Israel has carried out hundreds of  ‘war between the wars’ strikes against Iran-linked targets in Lebanon, Syria and Iraq. Oren speculates that a single miscalculation could easily lead to retaliation by Iran. “Israel is girding for the worst and acting on the assumption that fighting could break out at any time. And it’s not hard to imagine how it might arrive. The conflagration, like so many in the Middle East, could be ignited by a single spark.”

Until now, Iran has restrained itself despite constant aggression from Israel, but this could easily change. “The result could be a counterstrike by Iran, using cruise missiles that penetrate Israel’s air defenses and smash into targets like the Kiryah, Tel Aviv’s equivalent of the Pentagon. Israel would retaliate massively against Hezbollah’s headquarters in Beirut as well as dozens of its emplacements along the Lebanese border. And then, after a day of large-scale exchanges, the real war would begin…”

Oren predicts that rockets would  “rain on Israel” at a rate as high as 4,000 a day.  The Iron Dome system would be overwhelmed by the vast simultaneous attacks against civilian and military targets throughout the country. And, as if this weren’t devastating enough, Israel is totally unprepared to deal with precision-guided missiles that can accurately hit targets all across Israel from 1000 miles away.

Ben Gurion International Airport would be shut down and air traffic over Israel closed. The same could happen to Israel’s ports. Israelis that would seek refuge in far away lands would have to swim to safety.

In this scenario, Palestinians and Lebanese militias might join the conflagration and attack Jewish border communities on the ground while long-range missiles from Syria, Iraq, Yemen and Iran land. Before long, Israel’s economy would cease to function, electrical grids severed  and damaged factories and refineries would spew toxic chemicals into the air.

In the Shoah scenario Oren describes, “Millions of Israelis would huddle in bomb shelters. Hundreds of thousands would be evacuated from the border areas as terrorists attempt to infiltrate them. Restaurants and hotels would empty, along with the offices of the high-tech companies of the start-up nation. The hospitals, many of them resorting to underground facilities, would quickly be overwhelmed, even before the skies darken with the toxic fumes of blazing chemical factories and oil refineries.”

Oren predicts that Israel’s harsh response to attack, including a violent put down of likely West Bank and Gaza protests, would result in large scale civilian casualties and draw charges of war crimes.

As Oren states, he did not invent this prediction, it is one of the similar scenarios anticipated by Israeli military and government officials.

If such events occur, the US will be vital to the survival of the Jewish State by providing munitions, diplomatic, political, and legal support, and after the war, in negotiating truces, withdrawals, prisoner exchanges and presumably ‘peace agreements.’  However, the US under the Trump administration is somewhat unpredictable, especially in light of the current impeachment proceedings against Trump.

In 1973 the US helped save Israel by providing its military with the necessary munitions.  Will the US do so again? Do the Americans have the weapons capability to counter Iran’s ballistics, precision missiles and drones?  More crucially, what kind of support could America provide that would lift the spirits of humiliated and exhausted Israelis after they emerge from underground shelters having enduring four weeks without electricity or food and see their cities completely shattered?

This leads us to the essential issue. Zionism vowed to emancipate the Jews from their destiny by liberating the Jews from themselves. It vowed to bring an end to Jewish self-destruction by creating a Jewish safe haven. How is it that just seven decades after the founding of the Jewish state, the people who have suffered throughout their history have once again managed to create the potential for their own disaster?

In The Wandering Who I provide a possible answer: “Grasping the notion of temporality is the ability to accept that the past is shaped and revised in the light of a search for meaning. History, and historical thinking, are the capacity to rethink the past and the future.” Accordingly, revisionism is the true essence of historical thinking. It turns the past into a moral message, it turns the moral into an ethical act.  Sadly this is exactly where the Jewish State is severely lacking. Despite the Zionist promise to introduce introspection, morality and universal thinking to the emerging Hebrew culture,  the Jewish State has failed to break away from the Jewish past because it doesn’t really grasp the notion of the ‘past’ as a dynamic elastic ethical substance.