[ Editor’s Note: I will be focusing more on economic material in future NEOs as the world GNP continues to slide, and the strong continue to prey on the weak. While the IMF just downgraded the EU to 1.2% for the year, it is projecting half percent rates for the next two years.

I am assuming Brexit is figured into those numbers, but a stupid war is not. We dodged one this year when Trump cancelled the retaliatory strike on Iran for its legal act of shooting down a US drone that had entered its airspace.

Later, Saudi Arabia learned the US was not going to attack Iran over the alleged Iranian drone attack on Aramco, despite the Houthis taking full credit for it and having a solid motive – the war crimes against their people.

But despite those two near misses, we have simmering conflicts and instability in a number of places that could boil over, and the Mideast is by no means off the list.

As part of Netanyahu’s political diversions from his criminal cases, he is still banging his Iran-the-bogey-man drum over Iran’s continued backing off its JCPOA commitments. He has dug out his “nuclear breakout” language, trying to stoke the fear into Israelis so they would pressure Israel’s attorney general not to indict him.

He is still a dangerous man, as is Trump with his legal cases noose closing around him, and where getting a war going to divert attention will become more and more attractive. Would he stoop so low as that? Yes, he would, and even lower… Jim W Dean ]

When I wrote my China’s long march to total food security NEO article last month, I had intended to dovetail it with Russia’s accomplishment of being more self-dependent on feeding its people. What they both shared was having to deal with US sanctions before they reached their goal.

While China’s sanctions came compliments of Mr. Trump, Russia’s came via Mr. Obama, NATO and the EU, who backed coupmeisters in Kiev to turn Ukraine west, hoping to bring eventually it into the EU and NATO and then be able to put the US missile shield right on Russia’s border.

In Ukraine, ethnic Russians were officially targeted for purging, and those in Donbass got a quick taste of it. Whoever had accounts in the oligarchs’ pro-Kiev banks found those ATMs inaccessible, with their money eventually disappearing.

NATO and the US coup supporters backed a violent Maidan coup that saw contract snipers brought in to shoot both protesters and police to put them at each other’s throats, and the coup worked.

NATO goes for the Russian naval base

Taking over the government was merely step one. The big goal for NATO was to snatch the large Russian naval base in Sevastopol, Crimea, as part of its Ukraine coup prize, where Moscow had paid rent for years in advance to help out Ukraine’s cash flow problems.

The Western actors overplayed their hand. They used the neo-Nazis as Kiev coup storm troopers and they enjoyed the turmoil and thrill of taking power. And they wanted more.

Their party officials proclaimed from the Rada podium that they wanted to cleanse the country of ethnic Russians in the southeastern regions and Crimea and asset strip that region.

Julia Tymosenko was caught during a phone intercept that she wanted to nuke Donbass and then nuke Russia. Between the Tymosenko Terror and the neo-Nazis, the Ukrainian Russians looked east for help.

Crimean people try to save themselves

The Crimean people had a choice. They could accept the coup and go under the yoke, or they could reunite with their mother homeland, as Crimea had long been part of mother Russia.

They asked Russia to come into Crimea to protect them while they had an election to reunite with Russia, which was won overwhelmingly with 96% of the vote. The regime-change gang in the West still refers to this as a Russian takeover.

While Ukraine has suffered terribly financially after the coup, the Crimea economy is the envy of all in Ukraine; and Crimeans were hated for avoiding the fate that had been planned for them.

NATO, the US and EU were also bitter that Russia would save their compatriots in Crimea who had been publicly threatened with genocide by national public figures in Ukraine’s parliament and who dared help save the Russian naval base.

To save face, the West instituted sanctions on Russia, the shot across the bow of the world as we were all going to learn in the following years that the US had a growing appetite for sanctions, which Mr. Trump took to new levels by even adding the EU to the target list.

Russia was hit with everything but the kitchen sink, with diplomatic sanctions initially and quickly moving into defense, energy and the financial arena, limiting access to foreign investment and attractive interest rate loans. Exxon Oil had to withdraw from some major Russian partnership deals, suffering big losses.

Later came the food sanctions, cutting off the growing imports from a Russia that had been spending some of its $110 billion energy trade surplus with the EU by enjoying its food delicacies. The initial combined sanctions created unpredictable foreign exchange rates, which triggered a big drop in the ruble, inflation increased, and imports declined.

Things got worse when oil prices crashed from $100 a barrel to $60, cutting Russia’s export revenues by a third. Russia instituted counter sanctions, impacting $10 billion of food annually, almost a tenth of Russia’s food consumption and a quarter of imports.

Food prices increased over 23% percent in early 2015, and the Western sanctionistas were dancing in the streets. But then something happened they had not planned on.

The Russia people locked arms with their leadership, farmers, and domestic investors to boost domestic food production. Their success caught the West by surprise. Knowing the country was under stress, and why, they began to change their eating habits away from pricier foreign imports. By 2018, food costs rose less than the inflation rate. “Buy Russian” had won.

How did Russians beat the food sanctions?

As has happened in Iran, the whole country went to work on domestic import substitution, not just for short term relief but to protect the country from having food sanctions used against them in the future. Putin had always wanted to boost domestic food production, but had many competing areas for funding, with food expansion losing out.

Enter the Russian agrifood industry, which took up the challenge and produced results that surprised everyone. Investors saw a potential agricultural boom on their doorstep. Moscow budgeted subsidies for agricultural support spread over a wide area of subsidized loans, modernization of dairies and railway expansion.

Agricultural Minister Tkachev described it in 2015,

“We are thankful to our European and American partners who made us look at agriculture from a new angle and helped us find new reserves and potential.” And from fertilizer producer Phosagro’s Andrey Guriev, “In one day the Russian agricultural sector became profitable as hell.”

Russia became the world’s largest exporter of grains in 2016, taking over arms exports to grab the number two slot with $21 billion in sales. 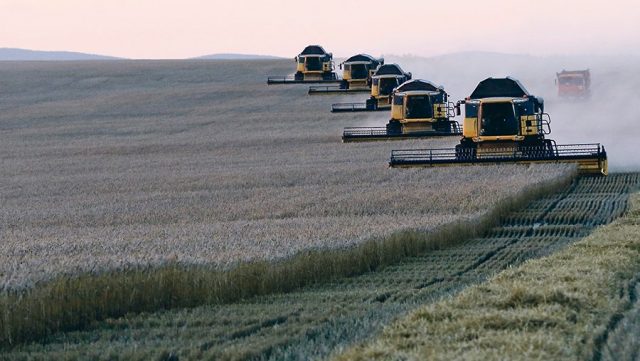 This caught China’s attention for working with a more dependable and non-exploitive trade partner with big orders of soybeans (for China’s pig farms) and sunflower seeds. Russia replaced US agricultural products hit by the Trump tariffs that China had been buying.

Putin now wants to double the 2018 $25-billion food exports by 2024. Yes, challenges remain. A depressed ruble makes imported equipment more costly, as have high interest rates. Imports still have strong niches in certain areas like cheese, which is a long term investment sector to build up.

Russian wheat has less protein than its US counterpart, but Russians decided to just eat a little more of their home brand to make up the difference. Despite the people’s concern over sanctions rising from 28% to 43% in 2018, about 90% of the public reports it prefers to buy Russian products when prices and quality are comparable.

These are the children of the WWII generation who don’t mind a little sacrifice for the good of all, something that has gone out of fashion in other parts of the world.

Russians miss indulging in foreign cheese delicacies, as we all do. I predict a Russian cheese industry that will someday equal anything produced. It will just take some time.

I read where one man had imported 1000 goats – an item not on the sanctions list – to increase his top-quality cheese production. He sees the future when the sanctions are lifted. The Russian people have always outlasted their difficulties.