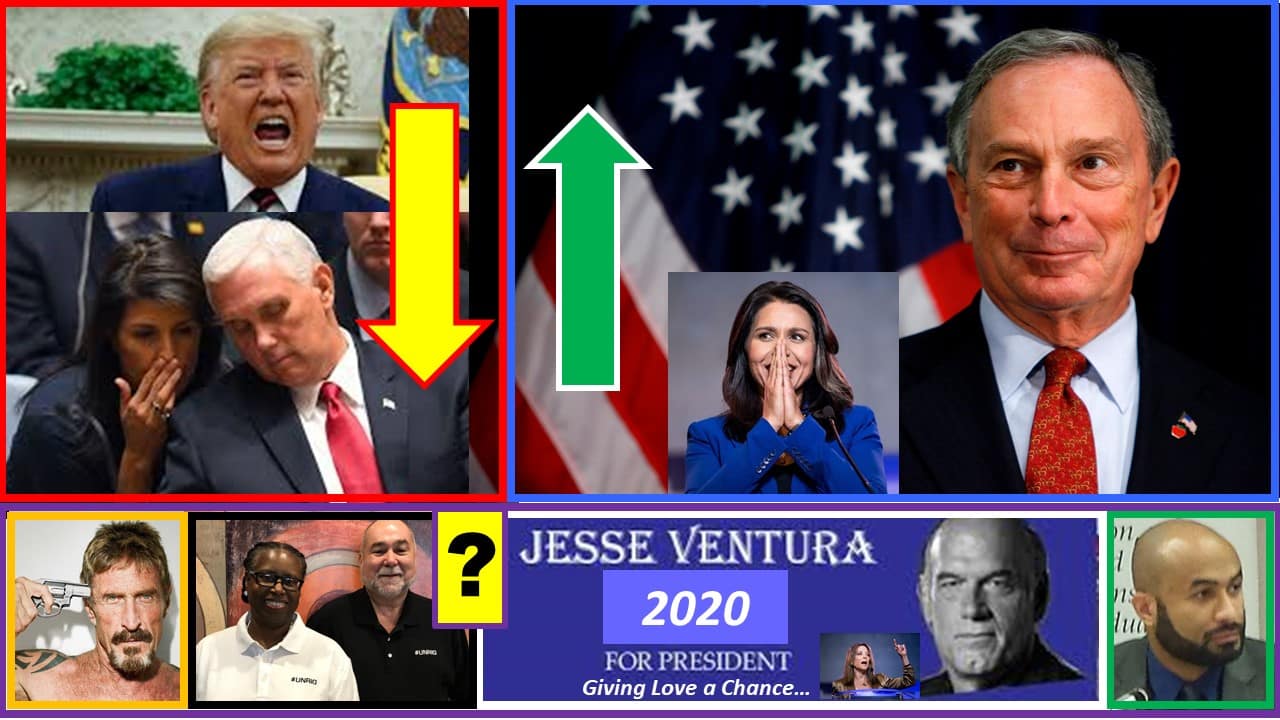 You asked me to answer the question, “Could Bloomberg-Gabbard beat Trump-Pence?”  The answer is a solid YES.

Bloomberg needs a sold VP with left leaning credentials to turn out the Democratic Party base, win the primaries, and secure the nomination. A female VP would make the ticket even stronger and more appealing to the far left. Without a VP with the right credentials, Bloomberg risks turning off left leaning voters in the primaries. A Bloomberg Gabbard ticket would also appeal to Independents who are not opposed to limited gun control.

But the worst thing for Trump is that Bloomberg could win over moderate Republicans. He is even more successful than Trump, as a businessman, and has even deeper pockets. He does not have to take any Democratic Party or special interest funding and he can claim that he is truly independent of the “swamp”. Just as Trump did. It would be bad enough if moderate Republicans, disillusioned with Trump did not vote, it would be even worse if they voted for Bloomberg.

Here is the thing. Many GOP voters in 2016 did not vote for the GOP they voted for Trump. In many ways his base is the antithesis of traditional GOP values. Bloomberg would be the same kind of candidate. He is bigger than any party, just like Trump. Moderate Republicans and Independents would reconcile themselves that they are voting for him not the Dems.

I would not be surprised either if a Bloomberg ticket actually helped GOP candidates downstream, because independent and moderate Republican voters, if they were to vote for Bloomberg, would likely seek to offset that vote by voting for GOP Senators and Congressmen and women.

Look at his “village” in New York. It was from across the political spectrum. This is bad news for Trump.

Re Gabbard. She only matters to Bloomberg as a way to turn out the left. They would not be able to resist voting for him with a female leftist VP on the ticket, even if they don’t like and trust Bloomberg.

Minority voters would also find it easier to vote for a Bloomberg/Gabbard ticket. He can turn out the black and Hispanic vote for example. He did in New York. Having a woman on his ticket would also appeal to many women. He might struggle to energize young Democrats but that’s where Gabbard comes in. She could appeal to them as a woman and “progressive”.

Bloomberg/Gabbard would be a compelling ticket. He Trumps Trump on strengths like success and wealth and he can argue that he is also independent within a party He is a proven winner. And having run New York, he is not lacking in political experience. Could be a landslide.

Of course the big if would be, can Bloomberg win the Dem primaries? If he runs as an independent he likely sinks the Dems.

You did not ask me “What can Trump do to beat Bloomberg-Gabbard?”

You have already answered that question but I will confirm it: a Trump-McKinney ticket (or Trump supporting McKinney as a Republican candidate for one of the two Senate seats in Georgia), combined with #UNRIG as an offering to the Independents, Libertarians, and #WalkAway moderate progressives, will produce a solid landslide. If he were to add a student debt jubillee and address elderly health care debt in some fashion, while materially improving conditions in black inner cities and white impoverished rural areas, it would be the Mother of All Landslides.

ROBERT STEELE: I personally feel that the President is going to have to do 9/11 disclosure and show that he is defending the 1st, 2nd, and 4th Amendments — which he is NOT doing today — while also addressing the toxic matter of Zionist Israel and Christian Zionists who are traitors against the USA, placing Israel First, not America First.  As the graphic I put together suggests, there is a real possibility of a unified coalition able to beat BOTH Trump AND Bloomberg, making a mockery of two billionaires fighting over the right to loot the  Treasury.  The Libertarians hold the key, since they alone are able to get their Presidential candidate on every ballot, but their present national leadership is so screwed up they will probably blow this once in a lifetime change to win. I personally continue to favor Trump, but on his present course he is headed for a loss. Today is 9/11/2019.  This is my heart-felt sounding of the alarm for the Team Trump that is riddled with traitors and incompetents.  To drain the swamp you first need to clean your own White House, and then you need #UNRIG — ALL of the People.

The first of the two parties to commit to #UNRIG while forming a genuine coalition cabinet committed to a balanced budget, bringing all our troops home, and closing down the police state, should win.  This election is Trump’s to lose and he appears intent on doing just that, mindful that he could be biding his time until he see who the actual Democratic nominees are. He has unlimited cultural, economic, legal, political, and spirtual tools available to him, but judging by the really crappy launch of Blacks for Trump, his team still stinks and still lacks full-spectrum competency. St.

Robert Steele: If I Were President

Steele on Books & America: Love It or Lose It!

Phi Beta Iota: The Vice President and his staff are lying when they say they never discussed the 25th Amendment option. Sources close to Pence and Nick Ayers say that they not only discussed it, Pence was actively engaging with key Trump supporters such as Jerry Falwell Junior, “re-assuring” them that he was ready to step in should the President be declared “incapacitated.” There

are two toxic cancers in the White House.  Mike Pence is one of them, Jared Kushner, who took a $1B bribe from Qatar and places Israel First at all times, is the other. Removing both of them from the White House, introducing Dr. Cynthia McKinney ideally as the VP but if not as the esteemed Republican candidate for Senator from Georgia, and making Pastor Chuck Baldwin the official White House chaplain, completes the deal that started with the President winning over both the Rothschilds and the Adelsons. America First means just that. Zionism — and Christian Zionism — are anathema to the Constitution and to the Republic.

SPECIAL: Review: The Shadow President – The Truth About Mike Pence

52 Zionist Strikes (Zionism is Not Judaism)