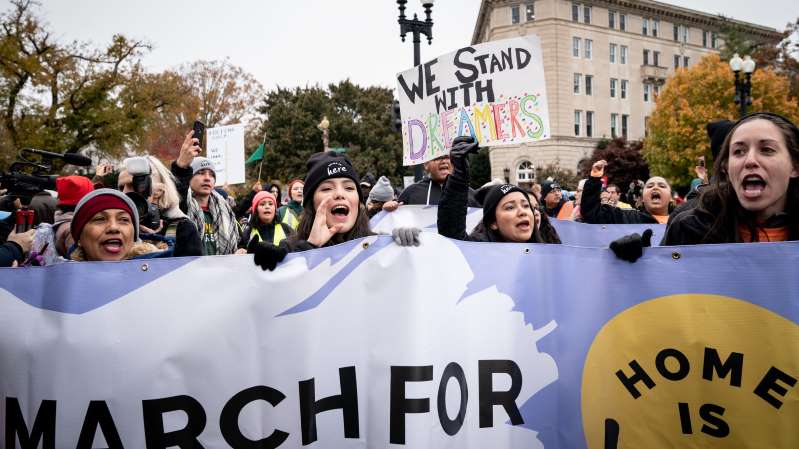 Mike’s Notes: Well, it appears that Mitch McConnel’s move denying even a consideration of President Obama’s final nomination for the Supremes is now paying off for the Orange Bloviator and his minions. Public opinion is very much in favor of granting citizenship to the “Dreamers” both among those on the Left and those on the Right. Nevertheless The Trumpster Fire in the oval office wants to score points with his disciples and is accusing these mostly fine young people of being criminals, etc. His hand selected members of the Supremes (actually those chosen by the Federalist Society) are going to pay him back for their lifetime jobs. This is nothing like our founding fathers had in mind when they setup our three “equal” branches of government.

WASHINGTON — The Supreme Court’s conservative majority on Tuesday appeared ready to side with the Trump administration in its efforts to shut down a program protecting about 700,000 young immigrants known as “Dreamers.”

The court’s liberal justices probed the administration’s justifications for ending the program, expressing skepticism about its rationales for doing so. But other justices indicated that they would not second-guess the administration’s reasoning and, in any event, considered its explanations sufficient.

Still, there was agreement among the justices that the young people who signed up for Deferred Action for Childhood Arriva ls, or DACA, were sympathetic and that they and their families, schools and employers had relied on it in good faith.

The arguments in the case, one of the most important of the term, addressed presidential power over immigration, a signature issue for President Trump and a divisive one, especially as it has played out in the debate over DACA, a program that has broad, bipartisan support.

The program, announced by President Barack Obama in 2012, allows young people brought to the United States as children to apply for a temporary status that shields them from deportation and allows them to work. The status lasts for two years and is renewable, but it does not provide a path to citizenship.

In the past, Mr. Trump has praised the program’s goals and suggested he wanted to preserve it. “Does anybody really want to throw out good, educated and accomplished young people who have jobs, some serving in the military?” he asked in a 2017 Twitter post.

But as the court took up its future on Tuesday, Mr. Trump struck a different tone. “Many of the people i n DACA, no longer very young, are far from ‘angels,”‘ he wrote on Twitter. “Some are very tough, hardened criminals.”