Today, FIDF received an exclusive briefing from Lt. Col. Jonathan Conricus — the international spokesman for the IDF — regarding the escalation in Israel as a result of the IDF’s swift action against Palestinian Islamic Jihad senior commander Baha Abu al-Ata yesterday.

I invite you to listen to a recording of the briefing by clicking here.

At this time, Southern and Central Israel remain under attack by PIJ rocket fire. Hamas has not joined the Palestinian Islamic Jihad rocket fire and seems to have no interest in escalating the situation at the moment.

In response to the rocket fire, the brave soldiers of the IDF are intercepting rockets using the Iron Dome batteries. Troops continue to attack PIJ targets to avoid dragging Hamas into the conflict and risking further escalation. 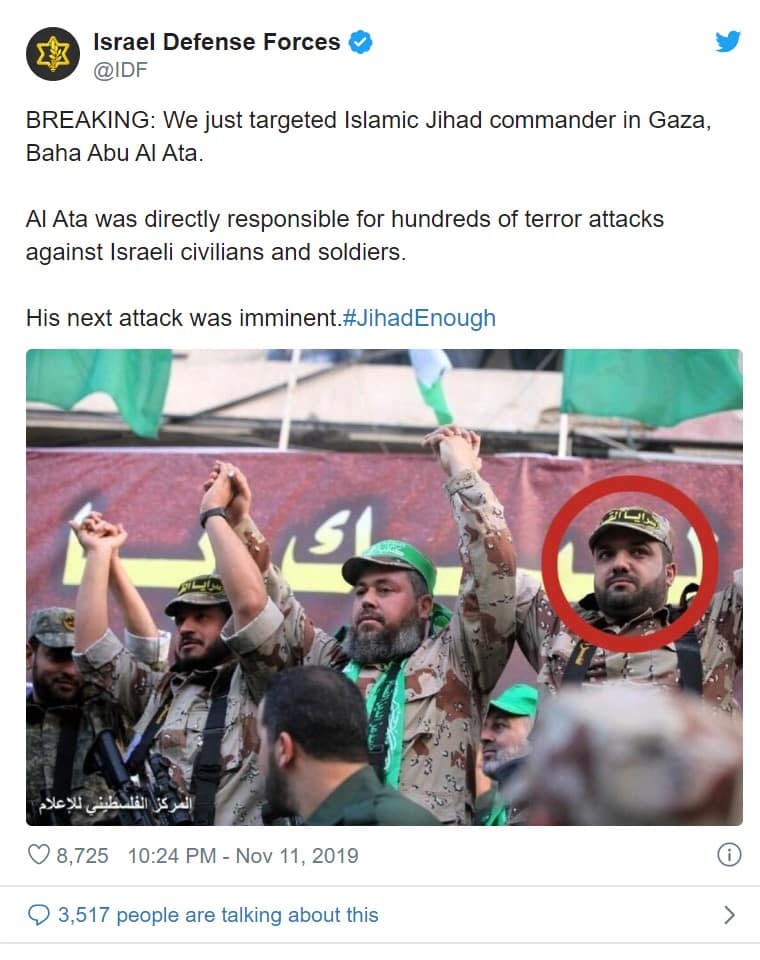 At this stage, neither side seems to have any interest in intensifying the situation. The official assessment is that it will not deteriorate to a level that would require an extensive military operation. Despite that, we know that today is today, and tomorrow is tomorrow in the Middle East. Things can change at any moment — immediately and dramatically.

We continue to carefully monitor the situation on the ground in Israel and will keep you apprised of any updates.

For now, please listen to Lt. Col Conricus’ briefing and pray for peace for our citizens, our soldiers, and our homeland.

With respect and appreciation,

The Israel Defense Forces reported a barrage of rockets was fired at cities located in both central and southern Israel late Wednesday evening.
Home Front Command Alerts were triggered in the Israeli cities Ashdod, Rehovot and Gedera, according to the IDF.

Reported eyewitness footage from Rehovot shows the interception of a rocket near the city.

Blasts from the rocket barrage can be overheard in a social media video allegedly recorded from Gaza.

Following the strikes, the IDF announced in a tweet with “#JiHadEnough” that it would renew attacks on terrorist targets in Gaza.
In a translated statement, the military force asserted it views the recent strike as very severe and noted that the service “is in high readiness and will continue to act as necessary against attempts to harm Israeli civilians.”

Earlier Tuesday evening, the IDF reported locations in southern Israel were struck by “hundreds of rockets” fired by Islamic jihadists in Gaza.

Israel and Gaza have been exchanging rocket fire for the past several days following the reported airstrike killing of Baha Abu al-Ata, commander of the Palestinian Islamic Jihad group.

​Israeli Prime Minister Benjamin Netanyahu, who had reportedly sought to eliminate Ata since September, said the commander “was a ticking bomb” who was “in the midst of planning additional attacks in the immediate short term.”