[ Editor’s Note: The metal bars are what we would call rebar, used to reinforce concrete. These Chinese versions are thinner than those used in pouring main beam construction – lighter so they can be swung with more speed.

They are not skull crushers, but leave deep nasty bruises, and painful. How quickly you see the savagery getting cranked up indicates that the protest-side supporters are pushing the envelope with these savage attacks on civilians. So one must ask why.

My guess would be the US effort to take over Hong Kong is anxious, and it wants to provoke China into bringing the military to get control over the city before it is destroyed. That would include mass arrests, with people being taken to mainland China.

The Hong Kong government would have to request it, and its mayor gave a big hint today that the city was on the verge of destruction. If China made this move to end the violence, the US would of course scream “interference in Hong Kong’s affairs”, which everyone knows the US has been deeply involved in itself.

The savagery being showered on civilians by protesters, not upon the police, taunts Peking to intercede. The old guy that was lit up yesterday during an argument looked like a staged event to me.

These are not politically motivated protesters doing this, but are professional gangsters dressed up like protesters.

The camera man was set up to shoot the incident like you would expect if he were in on it and wanted to get the full shot, which he did. This is the kind of theatrics that you see national intelligence agencies deploy when plan A is not working and they feel the need to go extreme.

Hong Kong screwed up by enlisting triad gangs to beat up protesters with their own rebar when returning from protests on the subway, only to see the police show up 30 minutes late, an unacceptable response time for a city at war with internal and external forces.

Hong Kong University got the full treatment with major destruction. Those pushing it this far want to force China to move. It cannot sit by and watch Hong Kong be destroyed without looking weak, and this is being exploited by you know who.

If the Chinese were to secure Hong Kong Streets, would Trump cancel the initial signing of the China trade deal? I think so. He giveth, and then taketh away. Trump is pushing China to move in so he can claim he is standing up to Peking Imperialism… Jim W. Dean ] 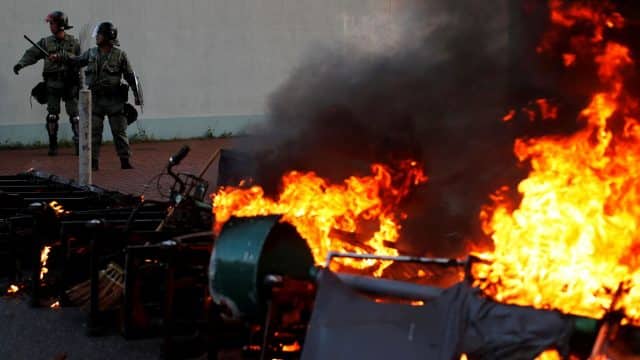 A disturbing video shows a woman being surrounded and beaten by masked protesters in Hong Kong. The unsettling footage comes as authorities struggle to clamp down on worsening violence in the semi-autonomous city.
–

The assault was reportedly sparked by a political disagreement between the woman and a group of armed demonstrators. Video of the attack shows the woman trying to walk away, only to be thrown to the ground by one of the black-clad rioters. One of the men then uses what appears to be a metal rod to beat her over the head.

The woman then sits on the pavement as the group surrounds her and taunts her. A journalist then helps her to her feet as blood trickles down the side of her face. She attempts to leave the scene, but the rioters catch up to her and begin to beat her with their rods once again. A man then shields her with his body as she sits curled up on the ground.

Filmed on Monday, the horrific footage has gone largely ignored by media outlets, with some commentators even insisting that the video lacks proper context.

On Monday, a similar verbal confrontation resulted in a group of protesters dousing a man in flammable liquid and lighting him on fire.

Hong Kong’s Chief Executive Carrie Lam has vowed to restore order to the semi-autonomous territory, describing the violent protesters as “the people’s enemy” who are “relentlessly destroying society.”

Violence does not seem to be letting up, however. On Tuesday night, demonstrators armed with Molotov cocktails, javelins and other weapons seized control of the Chinese University of Hong Kong (CUHK), leaving a trail of destruction in their wake.