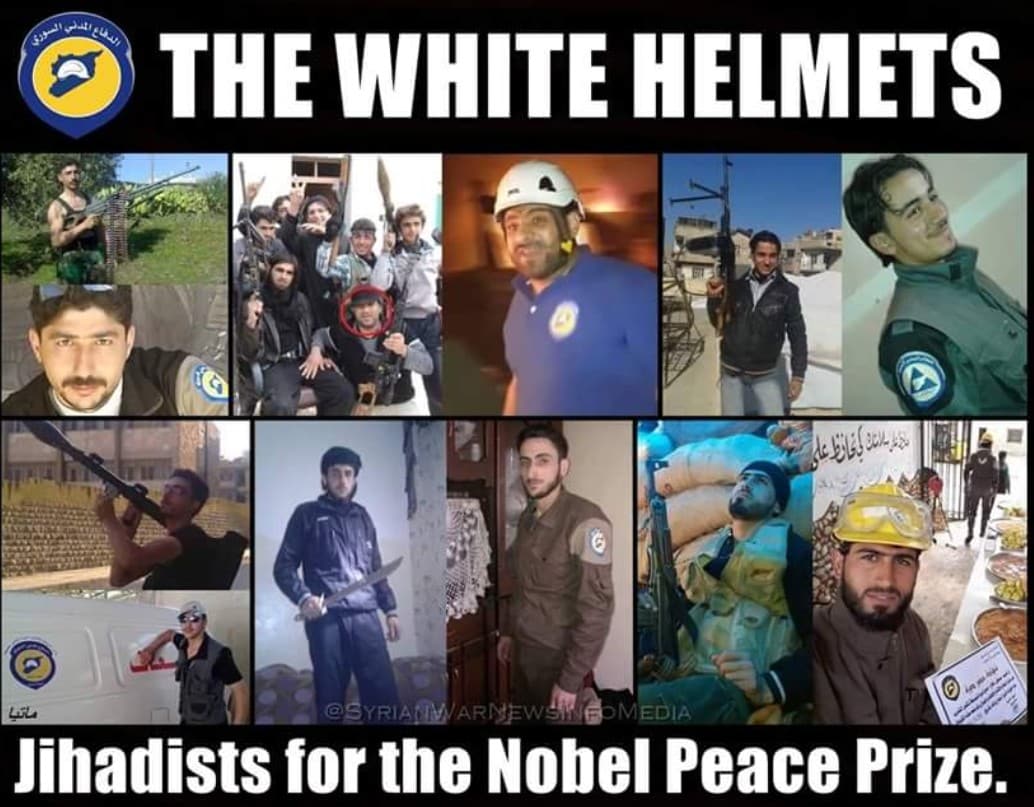 The founder of the White Helmets, James Le Mesurier, was found dead on November 11 in suspicious circumstances after falling off a two-story apartment building in downtown Istanbul. He was a former British army veteran and a private security contractor from 2008 to 2012 working for Good Harbor [1], run by Richard Clarke, the former Bush administration counter-terrorism czar.

Although the police in Istanbul are treating the incident as suicide, it’s obvious that a person of his background and training would never attempt suicide by jumping off a two-story building. Because such a fall might have fractured a few bones but it was highly unlikely to cause death.

The assassination of James Le Mesurier should be viewed in the backdrop of the killing of the Islamic State’s chief Abu Bakr al-Baghdadi on October 27 in a US special-ops raid. It’s important to note in the news coverage of the killing of al-Baghdadi that although the mainstream media has been trumpeting for the last several years that the Islamic State’s fugitive leader was hiding somewhere on the Iraq-Syria border in the east, he was found hiding in the northwestern Idlib governorate, under the control of Turkey’s militant proxies and al-Nusra Front, and was killed while trying to flee to Turkey in Barisha village five kilometers from the border.

The reason why the mainstream media scrupulously avoided mentioning Idlib as al-Baghdadi’s most likely hideout in Syria was to cover up the collusion between the militant proxies of Turkey and the jihadists of al-Nusra Front and the Islamic State. Unsurprisingly, the White Helmets area of operations is also Idlib governorate in Syria where they are allowed to conduct purported “rescue operations” and “humanitarian work” under the tutelage of al-Nusra Front.

In fact, the corporate media takes the issue of Islamic jihadists “commingling” with Turkey-backed “moderate rebels” in Idlib so seriously – which could give the Syrian government the pretext to mount an offensive in northwest Syria – that the New York Times cooked up an exclusive report [2] a couple of days after the special-ops night raid, on October 30, that the Islamic State paid money to al-Nusra Front for hosting al-Baghdadi in Idlib.

The morning after the night raid, the Syrian Observatory for Human Rights reported [3] on Sunday, October 27, that a squadron of eight helicopters accompanied by warplanes belonging to the international coalition had attacked positions of Hurras al-Din, an al-Qaeda-affiliated group, in Idlib province where the Islamic State chief was believed to be hiding.

Despite detailing the operational minutiae of the special-ops raid, the mainstream news coverage of the raid deliberately elided over the crucial piece of information that the compound in Barisha village five kilometers from Turkish border where al-Baghdadi was killed belonged to Hurras al-Din, an elusive terrorist outfit which has previously been targeted several times in the US airstrikes.

Although Hurras al-Din is generally assumed to be an al-Qaeda affiliate, it is in fact the regrouping of the Islamic State jihadists under a different name in northwestern Idlib governorate after the latter terrorist organization was routed from Mosul and Anbar in Iraq and Raqqa and Deir al-Zor in Syria and was hard pressed by the US-led coalition’s airstrikes in eastern Syria.

According to “official version” [4] of Washington’s story regarding the killing of al-Baghdadi, the choppers took off from an American airbase in Erbil, the capital of Iraqi Kurdistan, flew hundreds of miles over the enemy territory in the airspace controlled by the Syrian and Russian air forces, killed the self-proclaimed “caliph” of the Islamic State in a Hollywood-style special-ops raid, and took the same route back to Erbil along with the dead body of the “caliph” and his belongings.

Although Washington has conducted several airstrikes in Syria’s Idlib in the past, those were carried out by fixed-wing aircraft that fly at high altitudes, and the aircraft took off from American airbases in Turkey, which is just across the border from Syria’s northwestern Idlib province. Why would Washington take the risk of flying its troops at low altitudes in helicopters over the hostile territory controlled by myriads of Syria’s heavily armed militant outfits?

In fact, several Turkish journalists, including Rajip Soylu, the Turkey correspondent for the Middle East Eye, tweeted [5] on the night of the special-ops raid that the choppers took off from the American airbase in Turkey’s Incirlik.

As for al-Baghdadi, who was “hiding” with the blessing of Turkey, it now appears that he was the bargaining chip in the negotiations between Trump and Erdogan, and the quid for the US president’s agreeing to pull out of Syria was the pro quo that Erdogan would hand Baghdadi to him on a silver platter.

It’s worth noting that although Idlib governorate in Syria’s northwest has firmly been under the control of Hayat Tahrir al-Sham (HTS) led by al-Nusra Front since 2015, its territory was equally divided between Turkey-backed rebels and al-Nusra Front.

In a brazen offensive in January, however, al-Nusra Front’s jihadists completely routed Turkey-backed militants, even though the latter were supported by a professionally trained and highly organized military of a NATO member, Turkey. And al-Nusra Front now reportedly controls more than 70% territory in the Idlib governorate.

The reason why al-Nusra Front has been easily able to defeat Turkey-backed militants appears to be that the ranks of al-Nusra Front have now been swelled by highly motivated and battle-hardened jihadist deserters from the Islamic State after the fall of the latter’s “caliphate” in Mosul in Iraq and Raqqa in Syria.

In all likelihood, some of the Islamic State’s jihadists who joined the battle in Idlib in January were part of the same contingent of thousands of Islamic State militants that fled Raqqa in October 2017 under a deal brokered [6] by the US-backed Syrian Democratic Forces (SDF).

Finally, regarding the assassination of the founder of the White Helmets, James Le Mesurier, in downtown Istanbul, it’s worth pointing out that Turkey has been hosting 3.6 million Syrian refugees and myriad factions of Ankara-backed militant proxies. It’s quite easy for the jihadists of al-Nusra Front and the Islamic State to intermingle with Syrian refugees and militants in the Turkish refugee camps.

Evidently, one of the members of the White Helmets operating in al-Nusra’s territory in Syria’s Idlib betrayed his patrons for the sake of getting a reward, and conveyed crucial piece of information to Le Mesurier who then transmitted it to the British and American intelligence leading to the October 27 special-ops raid killing al-Baghdadi. In all likelihood, the assassination of the founder of the White Helmets was the Islamic State’s revenge for betraying its slain chief.

[1] The most dangerous job in the World: Syria’s Elite Rescue Force:

[2] ISIS Leader Paid Rival for Protection but Was Betrayed by His Own:

[7] Al-Jolani was appointed as the emir of al-Nusra Front by al-Baghdadi: