[ Editor’s Note: Better late than never. Iraqi security should have uncovered this during the first week. That they did not is an example of poor mid-level security people acting like deer in headlights.

They should have been on full offense with well-trained, uniformed and undercover security teams out in the street watching for the false flag artists from day one.

These protest dirty tricks have been around for a long time. Governments are supposed to have trained security people who know exactly what to look for, directed by separate command centers who are not distracted by dealing with the overall situation, just the subversion part.

It will not be rocket science to track down where these killer smoke grenades came from, in terms of their manufacturer. But that said, in the arms business, stuff gets passed around to hide the trail of the bad actors.

The Mideast has a lot of lazy, unmotivated security people who are in it for the money, and where working hard is considered a slave position. Leadership there is getting other people to work hard, and where the less you do, the smarter that is supposed to make you appear to be.

In Iraq, the military officers would pad their staff with phantom positions, usually their personal security people that would only occasionally show up for work, and they would split the pay with the boss. This was done to pad the “tribal” payroll with relatives, etc.

Once again, Iraq is learning the hard way. As for the street people, the young unemployed that are always scooped up to be used as cannon fodder by outside elements, they will be the last to figure out who was gaming them … Jim W. Dean ] 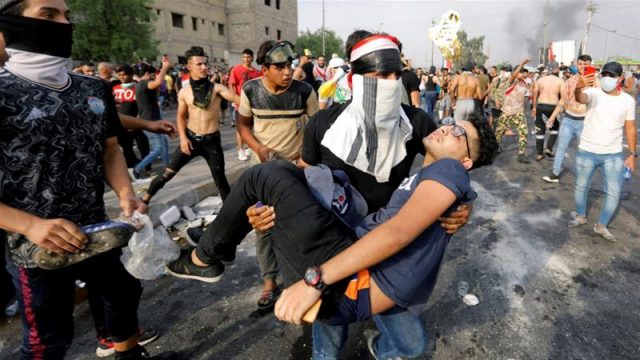 Iraqi Defense Minister Najah al-Shammari says a “third party” is behind shooting at the Iraqi demonstrators, as the smoke canisters used to kill the protesters are not of the type imported by the Baghdad government.

Shammari said on Thursday the range of smoke canisters used by the Iraqi security forces is between 75 and 100 meters, and they are of the conventional type used by all countries in the world to disperse demonstrators.

However, he said, the strange thing is that some protesters have been killed by smoke canisters fired from a distance of 300 meters directly at the people.

“Each one of them weighs three times heavier than the smoke canisters conventionally used,” he added. “The canisters found by forensic experts in the dead bodies and heads of the protesters have been imported to the country without the knowledge of Iraqi officials,” he said.

These weapons have never been imported by the government and officials of Iraq, he emphasized, adding that it is vague and unclear how they have been imported to the Arab country.

His comments came after the Amnesty International expressed deep concern over the use of such deadly canisters against civil demonstrators.

Brian Castner, Amnesty International’s senior crisis adviser on arms and military operations, says “the [casualty] photos are almost unshareable. These are truly gruesome deaths.” “We have never seen these grenades being used in this volume, in this way, or in any sort of civilian protest,” he said.

The Washington Post has also quoted doctors in a Baghdad hospital as saying that these grenades are fired directly at the heads and chests of protesters, smashing skulls and killing at least 31 people on impact.

At the start of October, street protests erupted in several Iraqi cities over unemployment and a lack of basic services. Protests have often turned violent, with security forces opening fire and protesters torching government buildings.

So far, over 300 people including civilians and security forces have been killed in the protests, according to the Iraqi Parliamentary Human Rights Committee.

Iraqi protesters set fire on US, Israeli flags in Karbala

Meanwhile, a group of angry demonstrators in the Iraqi holy city of Karbala have chanted slogans against the US and Israel and set their flags on fire, a viral video cited by a media report suggests.

The video released by UNews shows the protesters setting fire on the two flags, and holding placards that read “We don’t want Ba’athists to return, our leader is Ali Sistani,” and “5,000 suicide attackers, the gift of Saudi Arabia to Iraq.”

Iraqi people and officials have in recent weeks lashed out at the United States for its interference in the Arab country’s internal affairs. Influential Iraqi Shia cleric Muqtada al-Sadr recently threatened to take millions of demonstrators to streets if Washington keeps meddling in the Arab country.

He said that the Iraqi people want an early election free from the US intervention, as the country does not need arrogant countries and the the help of others.

Sadr’s statement came after the United States called on Iraqi officials to hold early polls as more people fall victim to ongoing anti-government protests that Baghdad says are being hijacked by foreign-backed elements.