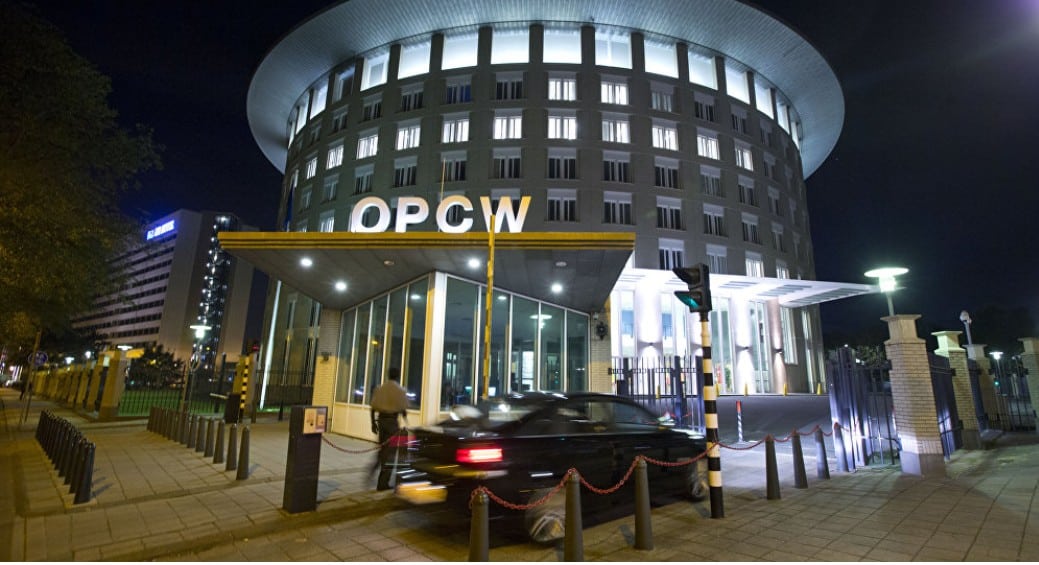 Sputnik Moscow: There have been several bombshell disclosures in recent months which starkly expose how the OPCW has been politicised, and suppressed information not supporting Western pretexts for military intervention.

Alexander Shulgin, Russian envoy to the Organisation for the Prevention of Chemical Weapons, has said tensions within the watchdog were rising due to the suppression of its own engineering report on the alleged chemical attack in Douma. He said the scandal was “a detonator which could unleash explosive trends in our organisation”.

Speaking to Dutch journalist Eric van der Beek, Shulgin stated the suppression was indirectly responsible for creating a situation comparable to the Cuban Missile Crisis, given the OPCW’s failure to mention contradictory and/or exculpatory evidence it gathered in its probe offered retrospective justification for airstrikes carried out ‘in response’ to the contested attack by France, the UK and US.

“There were and there are Russian troops in Syria. Imagine what would have happened if the “smart missiles” of the Western coalition had accidentally flown in the wrong direction and hit our Khmeimim air base or any other Russian presence in Syria. That would have been an attack on us and we would have to defend ourselves and react. We were actually on the brink of major confrontation between two nuclear superpowers. Fortunately we avoided the worst-case scenario,” Shulgin said.

He went on to suggest the US, UK and France rushed to blame the Syrian Arab Army for the incident because “their agenda was and still is to topple the legitimate Syrian government”, and as a result “weren’t interested in any investigation into the Douma incident by the OPCW” – instead, they needed “an excuse to carry out an act of aggression against Syria”. In doing so, he argued, they not only violated the UN Charter, but also “showed disrespect” for the OPCW.

​Such intransigence isn’t without precedent, as the Russian envoy noted – the US missile strike on Syria in reaction to the alleged chemical attack on Khan Sheikhun in April 2017, for instance.

One in a Million

When asked by van der beek whether he believed the Syrian government had never carried out a chemical weapons attack, and all reports of such activity were thus “false flags, staged by rebels to provoke military action by the US and its allies”, Shulgin noted the Joint Investigative Mechanism of OPCW and the UN in Syria had blamed the Syrian Government for three chemical attacks, and Daesh for one, but wasn’t convinced Damascus was responsible.

“In the case of Khan Sheikhun the point of impact of the cylinder did not match with the flight path of the Syrian plane that had supposedly dropped it. It was against all ballistic laws. In another case [Sarmin] the diameter of the cylinder allegedly dropped from high altitude into a ventilator shaft was exactly the same as the diameter of the shaft. One in a million chance it happened like that,” he explained.

Shulgin also drew a stark comparison between the manner in which reports submitted to the organisation by the Syrian government, and those provided by the armed opposition, were treated. For instance, some time ago the OPCW director-general sent a special mission to investigate reports of depots for ammunitions and chemical devices, discovered by Syrian forces on territory liberated from the opposition. The team duly visited Syria, and upon their return conducted an extensive briefing at OPCW headquarters in The Hague.

“I vividly remember the chief of the mission saying, ‘we discovered lots of chlorine cylinders, but they can be purchased in any convenience store’. Everybody was baffle. He seemed to suggest Syria was a wealthy prosperous country with fully operational swimming pools everywhere, while at that time Syria was completely devastated, in ruins. It didn’t seem to matter to him alongside these chlorine cylinders detonators and fuses were found. In his mind the cylinders were stored there just for domestic purposes, not to produce chemical weapons,” Shulgin said.

In discussing Russia’s ‘next steps’ in respect of the OPCW Technical Secretariat of OPCW, Shulgin explained two notes had already been dispatched to the body, demanding it clarify the discrepancies between the official report and the leaked engineers report. The first request was denied due to the stated need for protecting OPCW specialists from public exposure – the second made clear Russia didn’t want or need the names of the specialists or their nationalities, just their reports in full, unexpurgated form. “A long time has passed now; we are still waiting for an answer,” he lamented. 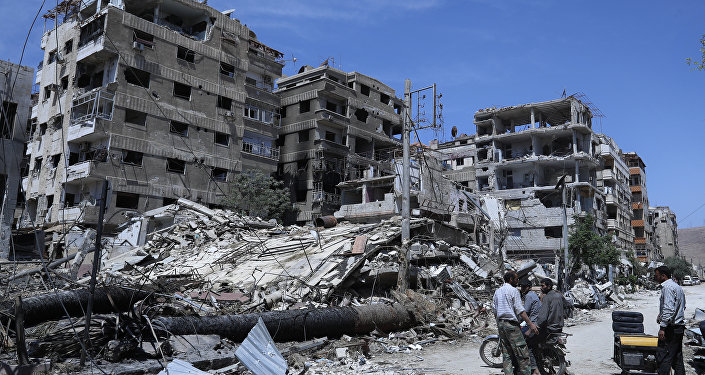 Shulgin also took aim at the OPCW gaining authorisation to attribute blame for chemical weapons attacks after the establishment of the Investigation and Identification Team, as such functions “aren’t provided for in the UN Chemical Weapons Convention”.

“As we’ve repeatedly stated, the OPCW Technical Secretariat is illegitimately authorised to identify those responsible for chemical crimes – it’s an intrusion into the exclusive prerogatives of the UN Security Council. Only this body and international courts have the right to attribute and punish those responsible for the commission of the most serious crimes under international law,” Shulgin lamented.

​Morevoer, in June 2018 the US and its vassals pushed OPCW’s attribution decision to be voted at the Conference of States Parties – less than half of OPCW members voted ‘yes’, but because of the way votes are counted at the CSP, the motion was adopted.

“Washington has long-embarked on a slippery slope when it seeks to replace international legal norms with so-called rules it itself creates on the move in order to advance its geopolitical interests.The reason behind taking the attribution away from the UN Security Council was Russia and China would no longer be able to veto initiatives from Western powers. This was openly said by western delegations. And they didn’t even bother to present justifications for this based on provisions in the Chemical Weapons Convention,” Shulgin noted.

​For Shulgin, this was yet another example “extreme politicisation” of the OPCW, under which the Technical Secretariat has come under the “very strong influence” of Washington and her allies, and the practice of consensus driven decision-making has been “completely forgotten”.

“Tensions are getting higher and the scandal around the FFM report is a detonator that could unleash the explosive trends in our organisation. For some time this was all happening behind closed doors and only national delegations knew of it. But now this is an open issue, outside of OPCW. Even Dutch parliamentarians are concerned, and have sent a request to the Foreign Minister asking what’s happening,”

Shulgin believes the situation unsustainable, and hopes “normal working practice” can return, with the organisation “a common home, where each and every delegation has the right to state its concerns and problems, and we can take into consideration our interests and speak on a basis of mutual respect, and discuss all our problems”.

However, until or unless this fundamental turnaround is achieved, Russia will continue to decline to financially contribute to the FFM. Shulgin and his colleagues are of the view the Mission’s activities simply weren’t “in compliance with the Chemical Weapons Convention”, with teams frequently not even respecting the “basic procedure” of collecting samples “at the place of the incident”. Moreover, the failure of the OPCW to fund FFM activities out of its regular budget, instead relying on voluntary contributions “mainly from the US and other Western countries”, made bias infecting its activities almost certain. 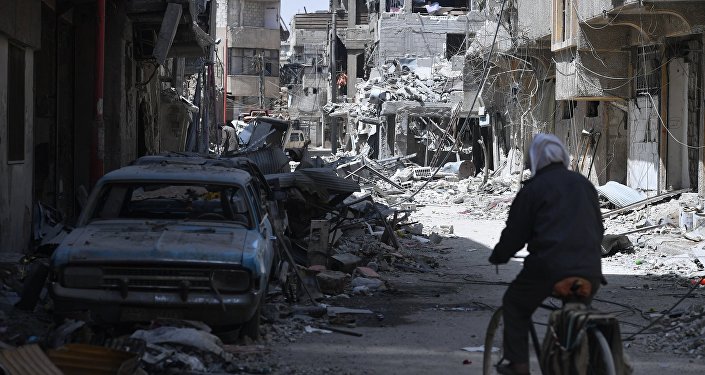 “I insisted upon the FFM [being] better represented geographically, not solely consisting of experts from countries hostile to the Syrian government, but this was turned down. The former Director-General said two years ago, ‘I’ll never invite Russians, nor Iranians, because they belong to parties fighting in Syria’. So I asked him, ‘what about the other countries fighting in Syria?’. I received no reply. Still, nothing prevents us from working with Western countries to overcome the current situation, and hopefully we’ll resume the practice of consensus driven decision-making. Let’s be constructive and optimistic,” he concluded.