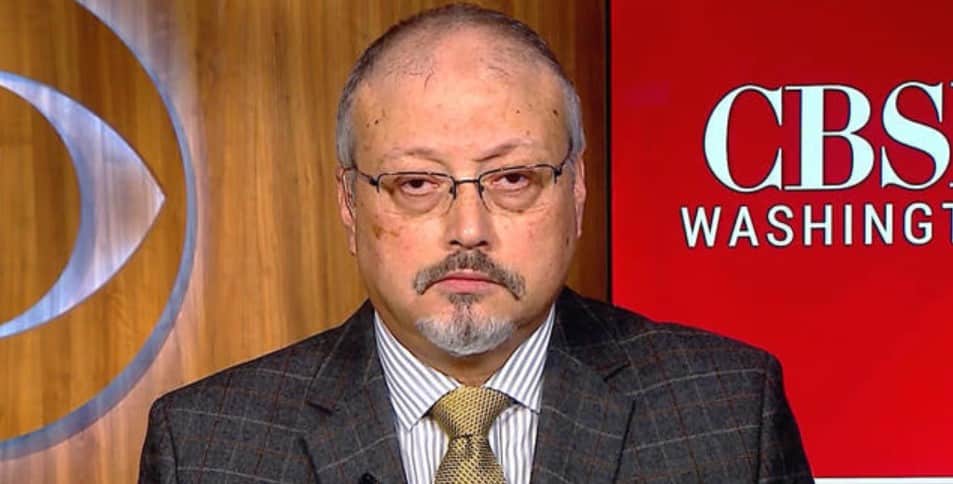 There are a lot of similarities in the murder of Saudi dissident Jamal Khashoggi at the Saudi consulate in Istanbul in October last year and the alleged suicide of the founder of the White Helmets, James Le Mesurier, who was found dead on November 11 in suspicious circumstances after falling off a two-story apartment building in downtown Istanbul.

Before his death, Jamal Khashoggi was brutally tortured by a team of Saudi henchmen sent by Crown Prince Mohammad bin Salman using a bone saw. James Le Mesurier too had several fractured bones in his dead body, though those were linked to falling off the second floor of the apartment building by the Turkish police in its preliminary report.

Despite his “humanitarian credentials,” the founder of the White Helmets, James Le Mesurier, was a shady character, alleged to be a clandestine British MI6 operative by Russia’s foreign ministry spokesperson Maria Zakharova days before his death.

Before taking up the task of training Syrian volunteers for search and rescue operations in 2013, Le Mesurier was a British army veteran and a private security contractor from 2008 to 2012 working for Good Harbor [1], run by Richard Clarke, the former Bush administration counter-terrorism czar.

In this line of work, one is likely to make powerful enemies, including intelligence agencies and militant groups. He could have been killed by anyone of them. In particular, the White Helmets operate in al-Nusra Front’s territory in Syria’s northwestern Idlib province and are known to take orders from the terrorist outfit.

Regarding the murder of Jamal Khashoggi at the Saudi consulate in Istanbul on October 2 last year, the Erdogan administration released American pastor Andrew Brunson on October 12 last year, which had been a longstanding demand of the Trump administration, and also decided not to make public the audio recordings of the murder of Jamal Khashoggi, which could have implicated another steadfast American-ally, Saudi Crown Prince Mohammad bin Salman, in the assassination.

In return, the Trump administration promised to comply with Turkish President Erdogan’s longstanding demand to evacuate American forces from the Kurdish-held areas in northern Syria, and the withdrawal was eventually effected an year later in October this year.

Another demand Ankara made to Washington was to pressure Saudi Arabia to lift the Saudi-UAE blockade imposed in June 2017 against Qatar, which is ideologically aligned to Turkish President Erdogan’s AKP party as both follow the ideology of the Muslim Brotherhood, in return for not making public the audio recordings of the murder of Jamal Khashoggi.

After the Khashoggi assassination and the international outrage it generated against the Saudi royal family, Riyadh tried to assuage Doha and invited Qatari Emir Sheikh Tamim bin Hamad al-Thani to attend the Gulf Cooperation Council summit in Riyadh on December 10 last year, though Doha snubbed the goodwill gesture by sending a low-ranking official to the meeting.

A question would naturally arise in the minds of perceptive readers of alternative media that why did the mainstream media, Washington Post and New York Times in particular, take the lead in publicizing the assassination of Jamal Khashoggi last year when the corporate media is completely silent over the suspicious death of the White Helmets founder, James Le Mesurier, on November 11?

One apparent reason could be that Khashoggi was a columnist for The Washington Post, which is owned by Jeff Bezos, the owner of Amazon. The Washington Post has a history of working in close collaboration with the CIA, as Bezos won a $600 million contract [2] in 2013 to host the CIA’s database on the Amazon’s web-hosting service.

It bears mentioning that despite Saudi Crown Prince Mohammad bin Salman being primarily responsible for the war in Yemen that has claimed tens of thousands of lives and created a famine in the impoverished country, the mainstream media hailed him as a “moderate reformer” who brought radical reforms to the conservative Saudi society by permitting women to drive and allowing cinemas to screen Hollywood movies.

So what prompted the sudden change of heart in the mainstream media that the purported “moderate reformer” was all of a sudden reviled as a brutal murderer? More than anything, it was the timing of the assassination and the political mileage that could be obtained from the Khashoggi murder in the domestic politics of the United States that prompted the mainstream media to take advantage of the opportunity and mount a smear campaign against the Trump administration by publicizing the assassination.

Jamal Khashoggi was murdered on October 2 last year, when the US midterm elections in November were only a few weeks away. Donald Trump and his son-in-law Jared Kushner in particular have known to have forged close business relations with the Saudi royal family. It doesn’t come as a surprise that Donald Trump chose Saudi Arabia and Israel for his maiden overseas visit in May 2017.

Thus, the corporate media’s campaign to seek justice for the murder of Jamal Khashoggi was actually a smear campaign against Donald Trump and his conservative political base, which became obvious after the US midterm election results were tallied. Even though the Republicans retained their 51-seat majority in the Senate, the Democrats now control the House of Representatives by gaining 39 additional seats and have initiated impeachment proceedings against Donald Trump.

Clearly, two factors were responsible for the surprising defeat of the Republicans in the US midterm elections. Firstly, the Khashoggi murder and the smear campaign unleashed against the Trump administration by the neoliberal media, which Donald Trump often pejoratively mentions as “Fake News” on social media.

Secondly, and more importantly, the parcel bombs sent to the residences of George Soros, a dozen Democratic Congressmen and The New York Times New York office by Cesar Sayoc on the eve of the elections. Although the suspect turned out to be a Trump supporter, he was likely instigated by shady hands in the American deep state, which is wary of the anti-establishment rhetoric and non-interventionist tendencies of the so-called “alt-right” administration.

In fact, the case of Cesar Sayoc can be compared with another iconic “patsy” in the American political history, Lee Harvey Oswald, the alleged assassin of John F. Kennedy. It was not a coincidence that Kennedy was killed in November 1963, and months later, the Gulf of Tonkin resolution authorized Lyndon B. Johnson to directly engage in the Vietnam conflict in August 1964 on the basis of a false flag naval engagement.

It’s obvious that the American deep state, comprising the State and Defense department bureaucracies, was responsible for the assassination of Kennedy. Most likely, the deep state turned against Kennedy after the October 1962 Cuban missile crisis and Kennedy’s pacifist rhetoric and conciliatory approach toward Washington’s arch-rival, the former Soviet Union, in the backdrop of the Cold War.

[1] The most dangerous job in the World: Syria’s Elite Rescue Force:

[2] Jeff Bezos Is Doing Huge Business with the CIA, While Keeping His Washington Post Readers in the Dark: