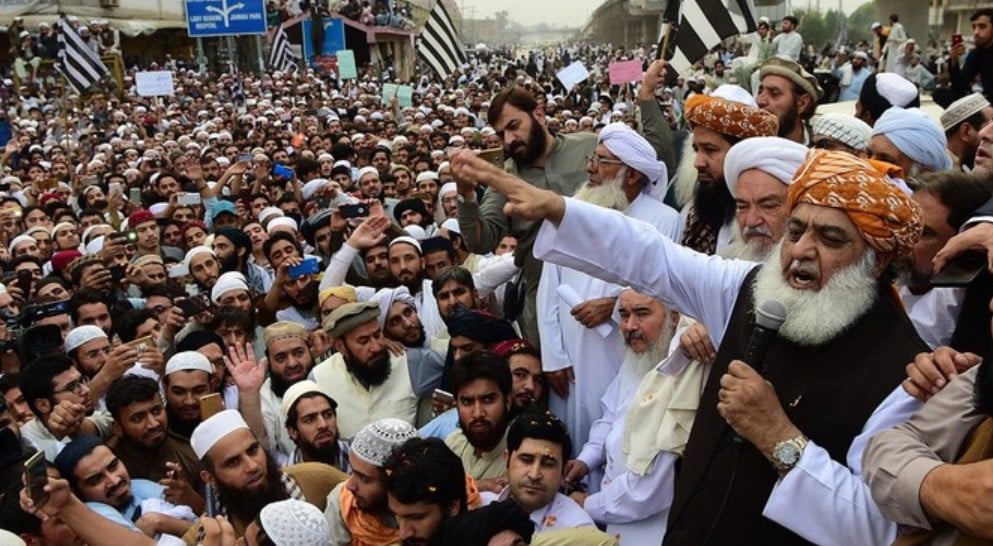 FuR had become a political orphan and was in wilderness after July 2018 elections. He suddenly came in the limelight as a result of his million Azadi March which he launched in last week of October. His threats to stage a huge sit-in at Islamabad (Isbd) were not taken seriously by the government (govt) and agencies.

In their assessment, he could at best gather few thousand supporters and the march would lose its steam midway because of differences among the opposition parties. However, he surprised all and sundry by moving the huge caravans from Sindh, Baluchistan and Khyber Pakhtunkhwa (KP) in a disciplined manner without any untoward incident and entered the vital ground of Isbd on 01 November peacefully and achieved superiority of strategic orientation.

The govt remained in a dilemma and had no idea when the intruders would wrap up and exit and what would be their next move. Staging an 18-day sit-in without any unpleasant incident was another surprise achieved by FuR.

Idea of fatiguing and frustrating the sitters didn’t work since the participants remained in a festive mood till the end and never complained or fell prey to the ones spreading misgivings among them. This perseverance was absent in Tahirul Qadri led PAT, which left the 2014 dharna midway.

Isbd became a strong base of operation from where FuR could exert direct pressure on the govt as well as remain in the news and also retain flexibility to exercise multiple options like plan B, C and D about which he often made a mention during the sit-in. He kept the govt guessing and on the tenterhooks about his next move. By achieving concentration of effort in the centre of gravity of the country residing in Isbd, he managed to create strategic effects.

What is important to note is that FuR came out of his political irrelevancy and became relevant and forced the govt to hold parleys with him. He held talks with the govt team led by Pervez Khattak from a position of strength and didn’t budge from his stance. His tone and tenor remained offensive and that of the govt defensive.

FuR played his cards shrewdly by maintaining an aggressive posture but making sure to keep his followers nonviolent and well-ordered and not crossing the tolerance threshold of the power centres. Had the PPP and PML-N not stayed away from dharna, he could have doubled the pressure.

One of the reasons why the govt remained passive and let FuR to gain an upper hand despite the hawks within PTI and the liberals constantly provoking Imran Khan to dump them in the sea was the non-violent approach of the sitters.

The other reasons were the tense geo-political environment, poor state of economy, failure of the ruling regime to fulfil its promises, to keep inflation and price hike in check, and to provide relief to the people because of which the people got disillusioned and frustrated. These weaknesses encouraged FuR to undertake the ambitious and bold march fraught with risks.

FuR was intensely disparaged for playing into the hands of enemies of Pakistan, for deflecting the attention from the plight of Kashmiris, for undermining the state institutions, for cautioning the military establishment to stay out of politics, and for trying to destabilize and topple elected govt just after 14 months without offering any alternative plan.

JUI-F leaders countered the propaganda by holding IK wholly responsible for the worsening state of affairs of the country and dubbing him a Jew agent having sold Kashmir to India. They say it’s not JUI-F dharna but Kartarpur celebrations which pushed Kashmir to the backburner.

Sudden peaceful departure of Azadi marches on the night of 13 November was a welcome relief for the govt and a cause of celebration for anti-FuR segments who had painted FuR in black. Although Plan A failed to realize the stated objectives, however FuR maintained that several objectives have been accomplished.

He said the Azadi marchers have shaken the roots of the govt, which in his view needed one more forceful jolt to crumble it down. He and majority of the analysts are of the view that it was owing to the pressure built by the 18-day dharna which mellowed down the hard stance of the govt; and that the relief given to Nawaz Sharif (NS) and Maryum was the outcome of it.

Having vacated the base of operation which was occupied by tens of thousands of his dedicated followers who kept chanting ‘Go Niazi go’, and waited for orders from their Quaid for an offensive action, FuR has now put into operation his Plan B envisaging occupation of choke points along main highways outside the cities with a view to paralyse the transport movement.

This strategy of climbing down from strategic vantage point to tactical heights has dispersed strategic effects of Azadi March in point of time and space, and has caused dispersion of effort. Disruption of traffic on the main highways would remain a source of irritant for the central and provincial govts as well as for public and private transporters, but would not pose a danger to the govt since blockades can achieve only auxiliary effects.

The changed strategy has however, shifted the pressure towards the provincial govts. Blockades are not causing disturbance to the city dwellers but would be a cause of inconvenience for public and private transport plying on main highways.

The barricades will not be permanent in nature but would keep rolling in accordance with the reaction from the law enforcing agencies. Idea is to keep pinpricking the rulers and to maintain the impression that Azadi March has not died down and Plan B is an extension of Plan A to achieve its objectives.

The new strategy aims at prolonging the effects and creating disturbances in provinces which already are contaminated with fissiparous tendencies. FuR probably aims at stoking these propensities with the help of nationalists and the two major parties and to maintain his nuisance value.  In case he succeeds in blocking one of the main highways for over a week, he will again start achieving strategic effects.

FuR’s offensive strategy and that too at his own without the support of mainstream political parties has made FuR politically relevant. Both PPP and PML-N supported FuR and his demands but have kept themselves away from Plan A and B and are playing a safe game. Both are hard pressed due to internment of their top leadership facing corruption charges.

Punjab Speaker Ch Pervaiz Ellahi who had been in dialogue with Rehbar Committee of Azadi Marchers stated that FuR is now the sole face of opposition and all others have become irrelevant. Of late, PML-Q which is the major ally of ruling PTI govt is getting frustrated over the performance of the govt, and it’s mishandling of NS case.

In their view, he should have been allowed to go to London for treatment without imposing the condition of indemnity bonds. The party is getting inclined towards PML-N under Shahbaz Sharif and JUI-F. It has all along been advising the govt to focus on governance and economy instead of accountability, which has become highly controversial. One wonders how Bilawal Bhutto is feeling so confident that there will be a new PM next year.

The blockades have been established along Quetta-Chaman, Rwp-Peshawar, Kashmir Highway and Karakorum Highways on 14 November which has disrupted flow of traffic. Friday prayers were offered at the sit-in venues. To give respite to the sitters, the sit-in duration has been fixed to 12 hours with proper relief system.

In Sindh, traffic on five highways has been disrupted. The aim is to jam the country and cause paralysis. FuR intends to expand the sphere of sit-ins from highways to the cities. 13 points have been earmarked in the cosmopolitan city of Karachi. The demand list has now increased to 13 points which include release of Dr. Aafia Siddiqui.

The govt faced with complex internal and external challenges and caught up in the web of foreign sponsored hybrid war has so far not strategized how to deal with the building political inferno manufactured by FuR led JUI-F, or to provide succor to the besieged Kashmiris locked down in biggest open jail for over 100 days.

Although there are strong indications of improvements in economic indicators, the govt has yet to correct its direction and priorities and to formulate plans for carrying out critical reforms and to fulfill its promises.

IK must have realized that his idealism of making Pakistan a State of Medina was far-fetched. He must have understood that it is not easy to govern the most difficult country of the world where the colluding hydra headed Mafias, feudal lords and Baradaries are well entrenched and the whole system is corrupted.