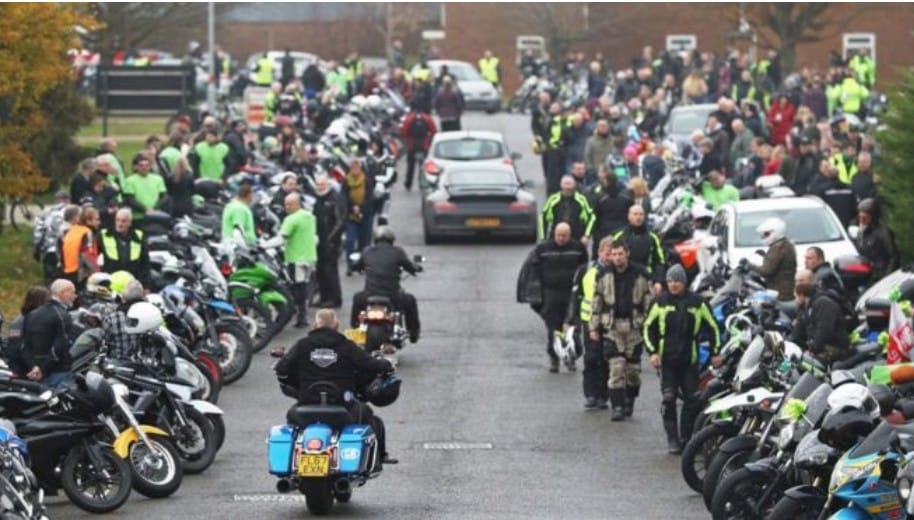 This year, an American “diplomat” ran over a cyclist outside RAF Croughton, an American base north of Cambridge, one where VT’s retired staffers often hang their hats on UK visits.

Croughton is a spy base and some allege it also contains a black site prison.  I have no opinion on this, am not allowed to have any opinion.

BBC: Hundreds of bikers have gathered to ride in memory of Harry Dunn, the teenager whose crash death led to a diplomatic row with the US.

Harry, 19, died after the collision in Northamptonshire in August that led to suspect Anne Sacoolas leaving the UK claiming diplomatic immunity.

A file has been passed to prosecutors, but no charges have been brought.

Mr Dunn’s mother Charlotte Charles said support from the public was “the only thing keeping us going”.

Harry’s father Tim said the support from those who took part in the motorbike and scooter ride, which started in Brackley, Northamptonshire, was “fantastic”.

Talking to Sky News, Mrs Charles said decisions in the case by the Crown Prosecution Service were “taking too long”.

“The case is a pretty clear cut, we are just waiting on their decision,” she added.

Harry was fatally injured on 27 August, when his motorbike was in collision with a car owned by Mrs Sacoolas, 42, outside RAF Croughton, where her husband Jonathan was an intelligence officer.

Mr Dunn, who explained the family was “struggling”, said: “We are getting more frustrated by the delays and the authorities.”

Mrs Sacoolas left the UK claiming diplomatic immunity, but was interviewed by Northamptonshire Police in the US last month.