by Dimtry Bokarev, …with New Eastern Outlook, Moscow…and the Institute of Oriental Studies of the Russian Academy of Sciences, a research institution for the study of the countries and cultures of Asia and North Africa

[ Editor’s Note: The Russians are coming to Africa, and in a way that surprised most, by writing off $20 billion of old Soviet debt. Many will wonder why this was necessary, as Russia could have jumped in to invest in infrastructure and taken extracted resources to pay the debt down on an agreed upon formula.

But that said, I am not even sure that Russian needs Africa’s natural resources, as it has vast amounts of its own that it can develop more securely. Also, the Chinese are far ahead of the Russians in infrastructure, and what Russia can add at this point will in no way challenge China’s dominant position.

This has me thinking that Russia is making this move to join China in pulling Africa away from the historically colonial West that does not have the capital to invest in China, as the EU Central Bank as taken a page from the US Federal Reserve in printing all the money that it needs to keep its own economy going.

The US response to these Eurasian expansion developments has been to put the big squeeze on South America, à la Monroe doctrine, as its last opportunity to maintain its own postmodern colonial structure, with the Venezuelan and Bolivian coups as the latest examples.

The Organization of American States (OAS) is totally involved in the process, with the payoff for them being the permanent overlords of all the indigenous people of that continent. This will go down in history as another fake chapter of America being the protector of freedom and democracy.

With the Republicans and Democrats both onboard this new neo-colonialism of South America, US workers have few options to avoid the limited future for the working classes, as they are all pitted against each other.

The Democratic party might claim to be the working man’s party; however, one must ask, the working men and women of what countries?… Jim W. Dean ] 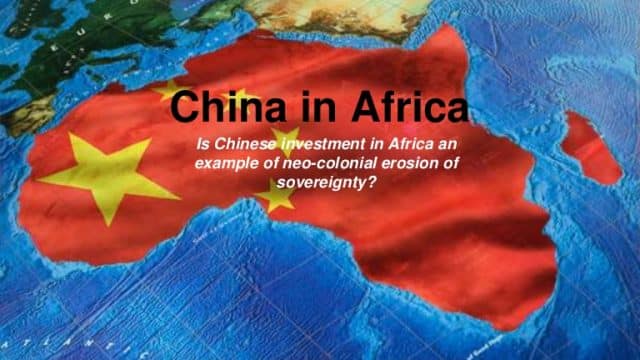 The news that has been making headlines following the Russia-Africa Summit in Sochi (October 23-24, 2019) is Russia’s cancellation of $20 billion worth of debt which African countries had accumulated. Russian President Vladimir Putin announced the move when speaking at the event.

The statement has sparked an intense debate in the media and online. Many people have not been able to comprehend this charitable act, who believe it was too generous and pointless. This gesture indicates that the Russians, who have been keeping an eye on China, are looking to renew relations with countries on the African continent.

China has been ramping up its economic activity in Africa at a dizzying pace, and has already penetrated all of the most important areas of the continent’s economic life: energy, the industrial sector, transport, mining, etc.

China is investing a huge amount of money in Africa: within the last 4 years alone,it has invested about $120 billion (Chinese President XI Jinping promised $60 billion at the Forum on China-Africa Cooperation (FOCAC) 2015 Summit, and another $60 billion at the FOCAC Beijing Summit in 2018), after all, cooperation between China and Africa has been developing for several decades.

Thanks to its investments, China has essentially become the most influential economic force on the African continent, and has been making full use of Africa’s vast resources: minerals (most importantly the continent’s fossil fuels, which China imports from Africa in massive quantities), labor resources (back in the day, Western countries once relocated their production to China to take advantage of a cheaper labor force, and the Chinese are doing the same in Africa, now that China is rich).

China is also taking advantage of Africa’s strategic location: in 2017, a Chinese military base was set up in the African state of Djibouti, strategically located on the Bab-el-Mandeb Strait, part of a strategically important shipping corridor connecting the Indian Ocean with the Mediterranean Sea. Almost all shipments between Europe and Asia pass through this shipping lane.

China is also working hard to create a unified African transport system, which should connect the entire continent with a detailed network of railways and highways. Delivery of Chinese goods over land from ports in coastal East Africa to coastal ports in West Africa will be fast via these roads, and Chinese ships will not have to make the long journey around the African continent to deliver goods to North America and South America.

This will further strengthen the Chinese economy, and Africa will become one of the connecting links in the global transport and economic system that China is building, “One Belt, One Road Initiative (OBOR)”.

The work China is currently putting in will allow the Chinese to become a dominant force in Africa over time, not only in the economic sphere, but also in the political sense, which means that China will be able to become the dominant force throughout the entire Indian Ocean and establish military bases in several African states, on the island of Madagascar for example.

When combined with the military base the Republic of China Armed Forces could be planning to build in Sri Lanka, this could massively strengthen China’s position in the Indian Ocean.

China could then go on to fully exploit the potential of Africa’s resources (which the Europeans did not have the tools for back in the colonial days), and this would enable the Chinese to make a new economic leap forward, transforming China into the most powerful superpower the world has ever seen.

Thus, it is safe to say that there is a very nice return to be made on investments in Africa. It seems Russia has come to the realization that Africa is a very valuable region with major opportunities for investors.

Dominating the African economy is profitable, letting the opportunity slip away would be dangerous, and to concede it entirely to China would make no economic or political sense. World powers including Russia are therefore entering the scene in the struggle for the African continent.

The actual format of the Russia-Africa Summit seems to mirror that of the China-Africa Summit. This may not be a coincidence, and could mean that Russia is getting ready to play just as big a role in Africa as China.

However, in order to compete with China, Russia needs to be making investments in the African economy on a similar scale. As the previously quoted figures would imply, we are talking about massive sums of money.

Russia currently cannot afford to invest the same kind of money in Africa as China: you need to be sure that your investments will pay off and know where the money is going when investing such huge sums, and that the money will not just dissolve into thin air above the vast expanses of the African continent. This requires strong political ties with recipient states.

However, China has a massive presence in Africa, which is now on a whole different scale, incomparable with Russia. Ties between Russia and Africa have suffered and weakened considerably since the collapse of the Soviet Union, and Russia does not feel confident enough on the African continent yet to invest hundreds of billions of dollars there.

As the saying goes however, ‘a penny saved is a penny earned’, and writing off the $20 billion worth of debt is in some ways comparable to making a major investment.

Given the level of economic development in most African countries, as well as the amount of debt these countries owe to China, they would very likely be simply unable to pay back their debt to Russia, and this debt would stand in the way of future cooperation. The Russian Federation has wiped the slate clean by writing off these old debts, inviting African states to begin economic cooperation from square one.

This may also be a veiled signal of a political nature: now African states are bound hand and foot to Chinese debt. At any moment, China could demand to have its debt repaid. After Russia’s act of generosity however, it would be a bad look for China if the country were to put too much pressure on its African debtors.

If African countries do come under pressure from China, they have an alternative partner they can turn to in Russia, a country that wishes them well, and African countries could replace China and choose Russia as their main partner.

Now, the Institute of Oriental Studies of the Russian Academy of Sciences is a research center where history and culture, economics and politics, languages and literature of the countries of Asia and North Africa are studied. The chronology covers all periods of the history of the Orient – from antiquity to the present day. About 500 experts work there. ]