[ Editor’s Note: Hong Kong authorities might have finally figured out how to end the student protests. Someone suggested that the riot police be split into three shifts of 8 hours each, and go at the protesters non-stop.

For now it seems to be working. They surrounded the students at Hong Kong polytechnic University, which they have used as a base to build their weapons, as it was good high ground for them to fight from.

They could throw gas bombs down on the cops, something that, if it happened in the US, police snipers would have begun shooting the protesters in a jiffy. In the end, they were fighting to break out.

One exhausted arrested protester stated, “They have been coming at us for 30 hours, we are totally exhausted.”

The US ploy to make China look bad has boomeranged, as the well-known discipline of the Hong Kong forces has had the US punching air. Yes, mainland China had troops in barracks, but kept them there during the conflict.

They only brought them out recently, unarmed in jogging shorts and T-shirts, to help clear and clean up some of the streets, where previously when Chinese civilians had tried to help do this, they were beaten by the protesters, a bad move on their part.

None of the protesters seemed interested in trying to beat up the young and healthy Chinese troops. I don’t think it would have worked out well for them. As Gordon has always said, the stories of war protesters spitting on returning Vietnam Marines were bogus, as they would have been beaten to death on the spot.

We will now see if the fact of 400 arrests yesterday and the new police tactics resonate in the minds of the protesters. While they are in jail, they will have time to think about whether jumping on the American freedom-and-democracy train was a good idea.

Maybe the Chinese authorities will set up internet chat rooms in prison for them so they can talk to the Bolivian native Indians how the US interference worked out for them, and then they can work the circuit talking to Afghans, Iraqis, Libyans, Egyptians, Ukrainians, Venezuelans, Iranians and Yemenis.

Being college-age kids, they might be able to figure it all out, if they want. Otherwise, as the Chinese authorities are telling the students straight out, if they continue to use lethal tactics against police, some of the protesters will be having funerals… Jim W. Dean ] 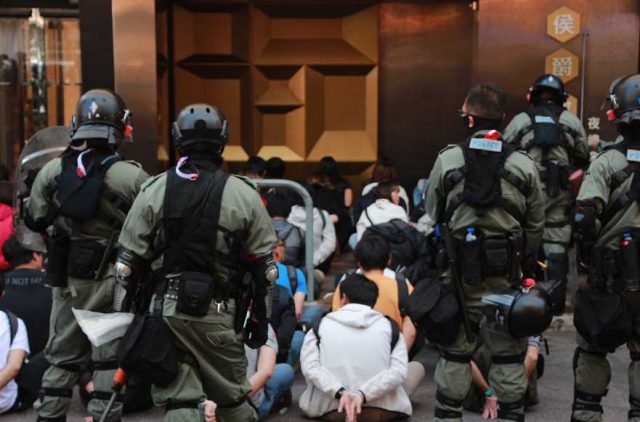 All eyes were on Hong Kong Polytechnic University this weekend as over 400 individuals were arrested and others were taken to the hospital after trying to escape the school.

Even though authorities have used notably restrained and non-lethal methods against protesters up until now, the Hong Kong Police Force’s (HKPF) patience may be wearing thin.

Hong Kong police continued to clash with protesters in the semi-autonomous city over the past several days, exchanging tear gas, water cannon and rubber bullets with demonstrators’ homemade petrol bombs and bow and arrow fire.

As unrest continues and demonstrators’ weaponry becomes more lethal, an escalation in police response to the protests may be on the horizon as well.

“If they continue such dangerous actions, we would have no choice but to use the minimum force necessary, including live rounds, to fire back,” Hong Kong Police Superintendent Louis Lau said Sunday, as reported by Deutsche Welle.

On Monday, officers were also able to shutter all exits to Hong Kong Polytechnic University, effectively trapping several hundred student protesters within the school. Approximately 400 people who attempted to exit the school have been arrested as a result.

Mike Wong, vice president of the San Francisco chapter of Veterans for Peace, joined Radio Sputnik’s Loud and Clear on Monday to discuss what he believes is the reasoning behind the anti-riot police’s restraint and explain why that same sense of control may soon disappear.

Furthermore, he pointed out, the governments of Hong Kong and mainland China are aware of the potential “political consequences” and the lens through which the international community – and Western media, particularly – would view them if police-protester clashes turned into a “blood bath.”

“They have to lie,” Wong argued, speaking of Western media. “They’ll take the very restrained force used by the Hong Kong police … and they’ll try to depict it as some horrible, evil empire … They won’t admit that [the HKPF] is using so much less force than would be used in the United States or any other Western country.”

With this knowledge, anti-riot police in Hong Kong have been acting with “great restraint” in situations that would play out differently in other parts of the world, according to Wong. For example, if someone hurled a Molotov cocktail at a US police officer, then they would be shot without consequence to the officer.

However, the HKPF’s patience may be running thin following this weekend’s clashes.

“The fact that they’re issuing kind of a blanket warning is a new stage, and I think it is a response to the stepped up firepower that the protesters have with the bows and arrows,” Wong said.

The Veterans for Peace official went on to argue that between the archery and the siege of Hong Kong Polytechnic University, the demonstrations are taking a medieval warfare turn, and the authorities actually appear to be waiting to let the protesters come out on their own rather than storm the school.