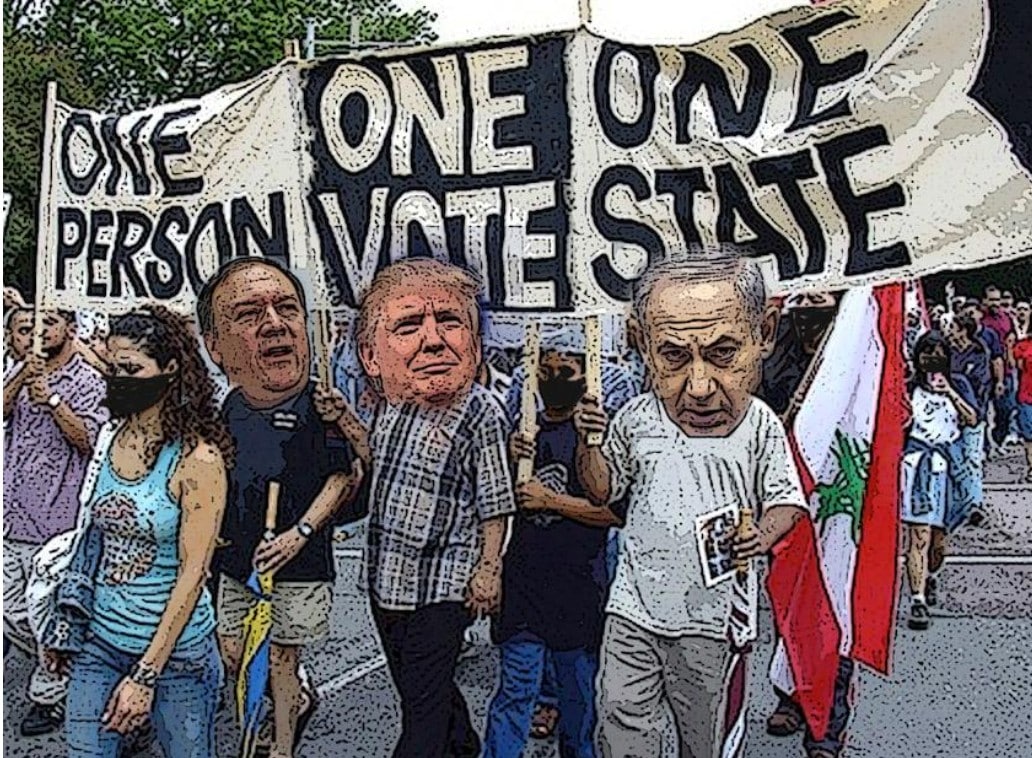 Secretary of State Mike Pompeo announced yesterday that the US is softening its position on Israeli settlements in the West Bank. Secretary Pompeo repudiated the 1978 State Department legal opinion that stated that Jewish settlements in the occupied territories are “inconsistent with international law.”

It is hard to determine whether the move was intended to rescue Benjamin Netanyahu’s political career or to buy the Jewish Lobby’s support for President Trump at a critical time. It is reasonable to assume that the policy was put forth to advance both aims.

Pompeo’s declaration was, predictably, welcomed by PM Netanyahu and denounced by Palestinian officials and anyone else who still advances the delusional Two-State Solution. Like Secretary Pompeo, I am far from an expert on international law, but it seems the notion of international law is vague or elastic enough to allow the secretary to (mis) interpret it in a radical manner. Yet, unlike most Palestinian solidarity campaigners, I see Trump, his administration and the recent move as a positive development.

However inadvertently, Trump has finally committed the USA to the One-State Solution. It is hard to deny that the area between the ‘River and the Sea’  is a single piece of land. It shares one electric grid, one pre-dial code (+972) and one sewage system. Ay present, the land is ruled over by a racist, tribal and discriminatory ideology through an apparatus that calls itself  ‘The Jewish State;’ and declares itself home for every Jew around the world; yet, is abusive, lethal and some would say genocidal toward the indigenous people of the land.

Yesterday’s move may buy Netanyahu some time and it may save Trump from being evicted from his current residence, but what it did most clearly was to redeliver a message to the Palestinians: In the battle for your liberation, you are alone. America is not a negotiator, it has never been one. The USA has a side in the conflict and it is not your side.

In categorical terms, Pompeo’s declaration repeats Trump’s earlier decision to move the American Embassy from Tel Aviv to Jerusalem. On December 6, 2017, President Trump announced that the United States recognized Jerusalem as the capital of Israel and ordered the relocation of the U.S. Embassy from Tel Aviv to Jerusalem. No doubt, the move bought Trump support from the Jewish Lobby in America, and political gain for Netanyahu in the Jewish State, it was also an unambiguous message to the Palestinians: there is no prospect of a  harmonious and peaceful solution for your plight.

For the Palestinians, the move also exposed the misleading and dangerous nature of their ‘solidarity’ movement. Jewish ‘anti’ Zionist institutions have undertaken a relentless effort to suppress the Palestinian’s Right of Return and replace it with watery alternatives such as ‘End of occupation’ or  ‘the Right to BDS.’ Trump’s move forced the Palestinians to accept that they were alone in their battle and finally  accept that The Right of Return is the core and the essence of their plight. Less than four months after Trump’s Jerusalem decision, on 30 March 2018,  thousands of Gazans gathered on the Israeli border to demand a return to their land.

That clumsy decision by Trump made to serve some immediate political purpose to do with Jewish support has matured into a vast awakening for the Palestinians.  Week after week, for almost three years, Gazans have arrived at the Gaza border in the thousands to bravely confront the IDF’s merciless snipers, tanks and air force.

The Hamas owes a big thank you to Trump who has managed to fuel and unite the Palestinians with a renewed spirit of fearless resistance. Israeli military analysts and commanders admit that the situation at the Gaza border is pretty much out of control. They agree that Israel’s power of deterrence is literally a matter of nostalgia.

Accordingly, Palestinian resistance organizations do not hesitate to retaliate against  Israel. Last week Israel was hit by the rain of 400 rockets fired over the course of only two days in response to  Israel’s assassination of a Palestinian Islamic Jihad militant.

Pompeo’s declaration provides an explicit and necessary message to the Palestinians in general and in the West Bank in particular. The conflict is not progressing toward a peaceful resolution. Those amongst the Palestinians who advocated the ‘Two States Solution’ will have to hide now.

Pompeo has affirmed that there is one Holy Land between the Jordan River and the Mediterranean Sea. From now on the battle over this disputed land is whether it will be subject to the racist discriminatory ideology implied by the notion of “The Jewish State” and its ‘National Bill,’ or if it will transform itself into a ‘State of its Citizens’ as is inherent in the notion of One Palestine.