[ Editor’s Note: The US has entered into another self-inflicted, Trump-regime snake pit battle, as negotiations began for South Korea to pay more for US military expenditures in country.

Is this another treaty-breaking situation that has become popular with the Trump crowd? Not really, because the current arrangement has operated since the Cold War era, when the US wanted to have forward-based troops in what it considered key areas for projecting American military power.

The US wanted this not only for providing defensive assistance to an attacked ally, but to also be able to conduct offensive maneuvers from an ally’s battle space. The understanding was that South Korea would suffer huge damage in any conflict with North Korea, whereas the US would not. If things went badly, the US could leave.

Hence, there was never any discussion in the past for a “quid-pro-quo” to pay for US troops or for renting US mercenaries, depending on your point of view.

S. Korea was quick off the mark, rejecting the US opening move of wanting to create a new name for its military assistance agreement. It would prefer to adjust the old agreement rather than throwing it out and starting over from scratch, which was the US goal.

S. Korea really had nowhere else to go with its initial position because its parliament would have to approve any alliance changes, and the government would need its political support to present a united front against the US ramming a deal down their throats.

I usually don’t make bets on this type of negotiation, but I suspect we shall see threats from the US to begin withdrawing troops which might be just fine with S. Korea. Maybe it would be happy with a 75% cutback and the cheaper costs to pay for US protection. Of course, North Korea would be happy, too.

Who knows, if US troops get kicked out of S. Korea, then Saudi Arabia might ask them to come play in the sand there, and pay the bill, too, a barter deal for sand…Jim W. Dean ] 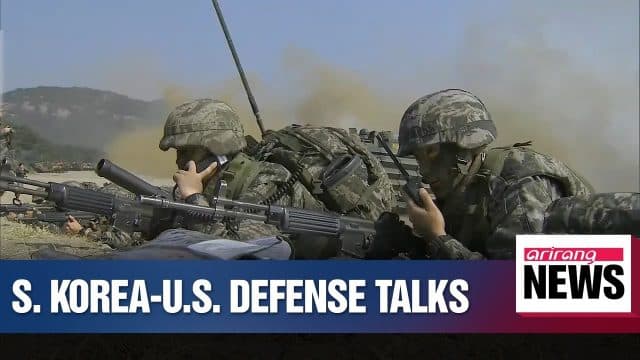 The latest round of military cost-sharing talks between South Korea and the United States has collapsed, in a rare public disagreement in the 66-year-old alliance between the two countries.

Citing Foreign Ministry officials, South Korean media said negotiators left the table on Tuesday after just about an hour of discussions that had been scheduled to continue throughout the day.

“Our position is that it should be within the mutually acceptable Special Measures Agreement (SMA) framework that has been agreed upon by South Korea and the US for the past 28 years,” the South Korean Foreign Ministry said in a statement, using the official name of a cost-sharing deal already in place. “The US believes that the share of defense spending should be increased significantly by creating a new category.”

According to South Korean lawmakers, US officials demanded that Seoul pay up to five billion dollars a year to keep the 28,500 American troops on South Korean soil, more than five times the 896 million dollars the country agreed to pay this year.

The US blamed the South.

Chief US negotiator James DeHart said the Americans cut short the talks to “give the Korean side some time to reconsider, and I hope to put forward new proposals that would enable both sides to work towards a mutually acceptable agreement in the spirit of our great alliance.”

“Unfortunately, the proposals that were put forward by the Korean negotiating team were not responsive to our request for fair and equitable burden sharing,” he said.

Speaking at a news conference on Tuesday, South Korean negotiator Jeong Eun-bo attributed the breakdown of the latest round of the talks to a “considerable gap” between the positions of the two sides.

However, he stressed that Washington had never mentioned the issues of scaling back or withdrawing troops from South Korea during the negotiations.

Any new cost-sharing deal would need the approval of the South Korean parliament, where ruling party lawmakers said this week they would “refuse to ratify any excessive outcome of the current negotiations” that deviate from the established principle and structure of previous pacts.

The American military presence in South Korea has stoked anti-US sentiments in the country.

The American military personnel have on many occasions caused outrage by committing various crimes, including rape and assault. The US forces were put under curfew in July after a drunken soldier attempted to steal a taxi and hit a Korean National Police officer in the process.

The Pentagon insists the troops are in South Korea to deter perceived threats from North Korea.