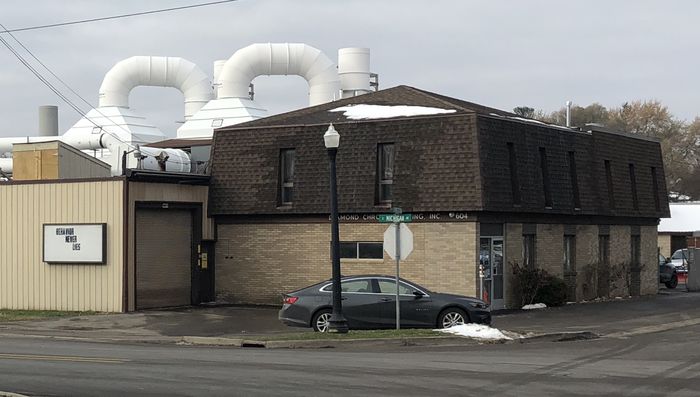 Mike’s Notes: It is easy to look the other way when an environmental contaminant is in someone else’s backyard but it is an entirely different thing when it is your own backyard. Though I live about 7 miles out of town, I know this building and am familiar with people, schools, and businesses in the area. With the Trump administration’s virtual gutting of the EPA and a state government that does not have enough revenue to deal with these sorts of issues, people living near here and kids in nearby schools are screwed. Most of the limited environmental funds available in Michigan are rightfully going to remediate the toxic lead laced water in Flint which has gained national attention and is embarrassing to Michigan politicians and deadly to those in Flint. Little is left for other potential disasters.

Frankly, I cannot understand the attitude that our environment is not important to all of us. After all we all live on the same planet. Though the wealthy can get further away from these toxic places, for now, eventually they will affect all of us. I will probably be dead before this happens so if I only cared for myself, it wouldn’t matter, but I have children and grandchildren who have to deal with what we decide today. It is not just my descendants who will have to deal with our problems but all of future mankind will be affected by what we do now.

As far as I am concerned, man made climate change is proven science, but there are those who disagree. This type of thing is different. All but the hopelessly ignorant know that these types of toxins are dangerous to our health. But there are those who think that profits trump every other consideration. (Trump may be the key word in that sentence)

I am familiar with trichlorethylene as I often used it in my previous career. I would get a bucket of it and, with my bare hands, wash industrial items. It is an excellent cleaner. Later in my career, this chemical was only allowed in a negative atmosphere environment. (meaning that all vapors were pulled out by a vacuum before they could escape.) We would lower the piece we wanted to clean into the cloud over the liquid and the “dirt” would literally fall off. So far, I am fortunate that my immune system is strong enough to not have suffered damages from my exposure. (as far as I know. Some of the problems that I attribute to old age may actually be related to my exposure. I have no way of knowing. Still, I don’t have some of the problems that others have suffered with.)

HOWELL, MI — Health officials say a cancer-causing chemical in the air near a Livingston County manufacturing facility poses an “imminent and substantial” danger to the public after industrial emissions testing found high levels leaking from rooftop vents.
The U.S. Environmental Protection Agency and Michigan Department of Environment, Great Lakes and Energy (EGLE) are testing air inside homes around Diamond Chrome Plating in Howell after the state health department began sounding the alarm about test results that show high levels of trichlorethylene (TCE) escaping the factory.

TCE is an industrial solvent used as a vapor degreaser at Diamond Chrome, located at 604 S. Michigan Avenue about a quarter mile south of downtown Howell in a largely residential area.
Exposure to TCE is linked to birth defects and immune system issues, as well as an increased risk of kidney and liver cancers and non-Hodgkin’s lymphoma. The EPA has classified TCE as a known carcinogen.
A public meeting is scheduled Thursday night, Nov. 21, from 7 to 9 p.m. at the Parker Middle School at 400 Wright Road in Howell.

According to state documents, TCE was measured on Aug. 8 at nearly 14 times the state’s residential health screening level of 2 micrograms per cubic meter (ug/m3) near 220 S. Michigan Avenue, about four blocks north of the Diamond Chrome plant.
On Nov. 4, TCE was measured at 11 times the screening level at 110 Brooks Street, which is about 400 feet north of the plant.