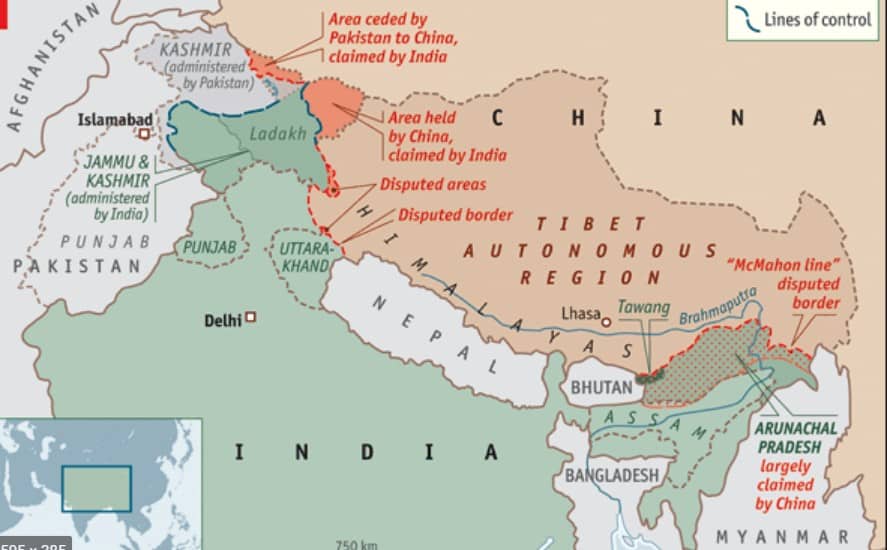 Pakistan Foreign Office said in a statement that Islamabad “rejects these political maps, which were incompatible with the United Nations’ (UN) maps….no move by India could change the disputed status of Jammu and Kashmir…India’s expansionist intention has manifested itself in another dangerous move of formally annexing Indian-held Kashmir, as it has come up with a fanciful new ‘map’, in violation of recognised geographical boundaries”.

Besides, this malevolent scheme of the Indian extremist rulers deliberately identifies Pakistani side of Azad Kashmir as well as certain areas of Gilgit-Baltistan as an Indian territory.

In this regard, China objected to the bifurcation of Jammu and Kashmir into two union territories as “unlawful and void”, adding that India’s decision to “include” some of China’s territory into its administrative jurisdiction “challenged” Beijing’s sovereignty.

China’s Foreign Ministry spokesman Geng Shuang told the media on October 31, 2019: “China deplores and firmly opposes that. India unilaterally changed its domestic laws and administrative division challenging China’s sovereignty…this is not effective in any way and will not change the fact that the area is under Chinese actual control…China urges the Indian side to earnestly respect our treaties and uphold peace…in the border areas and create favourable conditions for proper settlement of boundary question.”

Earlier, China had criticised the Indian government’s August 5 (2019) order of the abrogation of Article 370 and the formation of Ladakh as Union Territory, saying that some of the area involved Chinese territory.

It is mentionable that after the revocation of Article 370, Indian External Affairs Minister S. Jaishankar, who visited China in August 2019, informed his Chinese counterpart Wang Yi that the revocation of the special status of Jammu and Kashmir is an internal matter and the sole prerogative of India and it has no implication for either the external boundaries of India or the Line of Actual Control (LAC), situated between the two countries.

On the other side, Beijing reminded that the Chinese concerns in this respect have been misplaced, as far as the India-China boundary question is concerned; the two sides had agreed to a fair, reasonable and mutually acceptable settlement on the basis of the 2005 Political Parameters and Guiding Principles.

While, the India-China LAC covers 3,488 km and the Special Representatives of both the countries have held 21 rounds of talks to resolve the boundary dispute.

As regards Nepal, members of the opposition parties protested in the capital Kathmandu as well as other parts of the country against the Indian illegitimate move over the inclusion of the Kalapani area of the Indian Uttarakhand state into India, as shown in the Indian new political map. Both New Delhi and Kathmandu lays claim to Kalapani region as part of their countries’ territory. While 97% of the border between India and Nepal has been demarcated, the portions on Kalapani (and also Susta) remain unmarked.

Kalapani is a 35 sq km area in Uttarakhand under the control of the Indo-Tibetan Border Police (ITBP). Uttarakhand shares an 80.5 km long porous border with Nepal and a 344 km border with China.

However, Nepal’s Ministry of Foreign Affairs said in a statement: “The Nepal government firmly believes that the Kalapani is a part of Nepal…Nepal has objected to the new map and has activated diplomatic channels with India to have a dialogue on the issue. [In the recent past], Nepal’s ambassador to India, Nilamber Acharya held a meeting with Foreign Secretary Vijay Gokhale during which he raised the boundary issue”.

The statement has also reminded the Indian side that the Foreign Minister-level joint commission, in 2014, had delegated the Foreign Secretaries of both countries to work out a solution to the outstanding border-related issues in consultation with experts.

Notably, in 2014, a joint working group on boundary talks between New Delhi and Kathmandu was revived. In the same year, Indian fanatic Prime Minister Narendra Modi made his maiden visit to Nepal and assured the Nepalese ruler that the issue would be resolved through negotiations.

Nevertheless, sources suggest that that Nepal has informed India that any boundary dialogue on Kalapani will also concern China since it is a trijunction where Indian, Nepalese and Tibetan (Chinese) borders meet. The Nepal government has made it clear that Kalapani is an integral part of their country and talks are still on between New Delhi and Kathmandu over this unresolved area.

Nonetheless, instead of resolving the issues thorough dialogues, India’s notorious new political map has stirred controversy in Pakistan, China and Nepal regarding the disputed territories which needs solution. Thus, extremist government led by the fundamentalist Prime Minister Modi has created war-like situation with these countries in wake of modern world trends like renunciation of war, peaceful settlement of disputes and economic development.