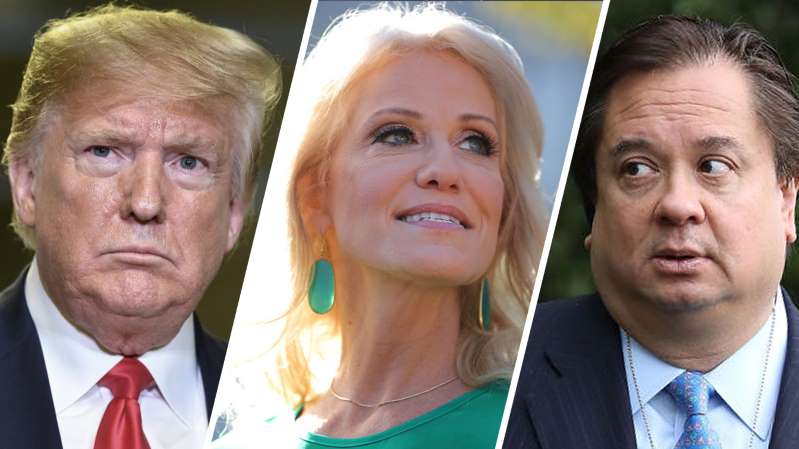 Mike’s Notes: At some point, Donald Trump throws everyone he knows under the bus. Kellyanne Conway has been his media guru since she abandoned Ted Cruz and latched onto Trump. I have long suspected that she was just in this for the profit and would sell her soul to the highest bidder.

This reminds me of the marriage of Mary Matlin and James Carville.  Though they have worked for politicians on the opposite side of the political spectrum, they are married and profess to love each other. I believe, that they are just professional “political influencers.”

I believe that Kellyanne and George Conway are much the same. Allegedly, George was the person who introduced Kellyanne to Donald Trump.

Since then, I think George has had a “come to Jesus moment”  where his personal integrity, his party loyalty and any financial benefits that may accrue from a relationship with Donald Trump rate well below his own integrity. Still he realizes that his wife’s job depends on her “paid loyalty” to Donald Trump.

What is really going on inside their relationship is no one’s business but their own.

With this tweet, Donald Trump has speculated inside their personal relationship, a place where outsiders should not go.

In a live phone interview with “Fox & Friends” on Friday, Trump speculated about those same issues — and suggested Kellyanne Conway may to be blame for them.
The president did so virtually unprompted.
Trump was asked by “Fox & Friends” co-host Ainsley Earnhardt about George Conway’s recent assertion Nikki Haley, the former U.S. ambassador to the United Nations, is gunning to be his running mate in 2020.
“Kellyanne is great but she’s married to a total wack job,” Trump said. “She must’ve done some number on him, Ainsley. I don’t know what Kellyanne did to that guy because I don’t even know him. I met him for a second. He’s got to be some kind of a nutjob because she must have done some bad things to him because that guy is crazy.”

Trump did eventually address the question, saying, “Mike Pence is a great vice president — he’s our man.”
It’s not the first time Trump has publicly disparaged George Conway, who has emerged as one of his most persistent critics.
Conway frequently uses his Twitter feed and newspaper op-eds to draw attention to what he calls the president’s malignant narcissism.
In March, for instance, he questioned Trump’s mental health, posting sections of the Diagnostic and Statistical Manual of Mental Disorders to his Twitter feed.
Trump, in return, called George Conway “a stone cold LOSER & husband from hell!”
In her interview with Blitzer, the CNN host asked Kellyanne Conway to respond to George Conway’s assessment that testimony of career diplomats in the first public impeachment hearings was damning for her boss.
“Where is the shame?” Kellyanne Conway said. “What you just quoted is said every single day by other voices, but you wanted to put it in my husband’s voice because you think somehow that that will help your ratings or that you’re really sticking it to Kellyanne Conway.”
“And let me make very clear. You didn’t stick it to Kellyanne Conway,” she added. “I think you embarrassed yourself, and I’m embarrassed for you.”
George Conway did not respond directly to Trump’s speculation about his marriage on Friday. He did, however, respond to the president’s performance on “Fox & Friends.”
“I have little doubt that, within the lifespans of many reading this tweet, students throughout the world will learn in their history books that a deeply psychologically unwell man — also a criminal — was president of the United States in the late 2010s,” Conway tweeted, adding: “Many of those young people will see and hear clips of that man, like his interview on Fox & Friends this morning. And they will shake their heads in virtual disbelief.”