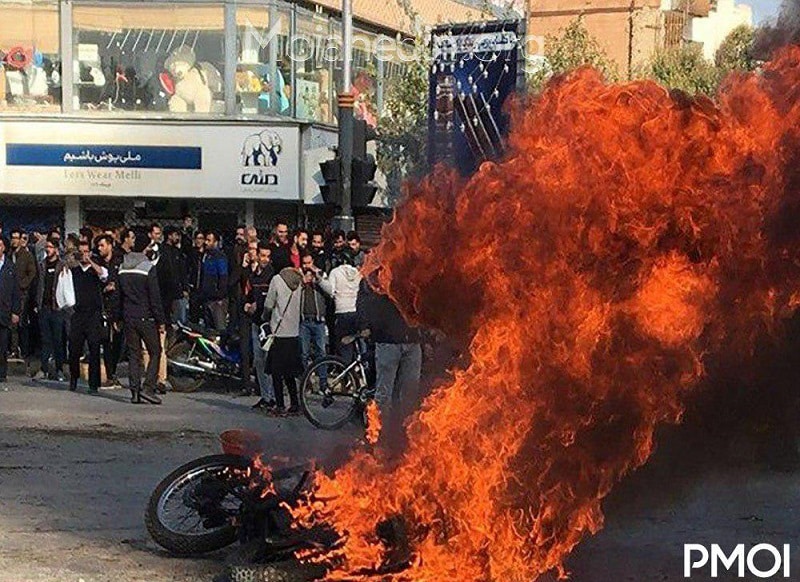 [ Editor’s Note: The idiots have not figured it out yet, despite the last time they had riots and a lot got rounded up. When they do this, they get a big thank you from the Intel and security people for helping them to be able to make a big sweep in rounding them up.

As a bonus, when they go to the homes of the arrested people to get their paperwork, after already going through their phones and social media, then they have all their contacts.

This is such a security bonanza for the government that it would be worthwhile to write a check to compensate the businesses burned out by these dummies, as if they think that burning down private businesses is somehow going to help their political cause.

For these people to think that riots are somehow qualifying them to form a replacement government is beyond my imagination.

It also hardens the average Iranian against these people, as the assets destroyed and the money spent to rebuild could have gone to a long list of badly needed items, like the indirect medicine embargo that the US cruelly has in place.

Notice the US medical associations, the churches…we have not heard a peep from them in protest.

What the hell happened to America?

Where are all the people that are supposed to know right from wrong?

Judiciary spokesman says Iran’s elite defense forces have apprehended around 100 of the ringleaders of the riots that took place across the country under the guise of protest at fuel price hikes.

“Around 100 of the senior and junior ringleaders as well as the principal elements behind the recent disturbances have been identified and arrested by the Islamic Revolution Guards Corps (IRGC) at various spots across the country,” Gholam-Hossein Esmaili said on Friday, IRNA reported.

The official was remarking on the sidelines of a visit he was making of Tehran’s Evin Detention Facility alongside the capital’s Prosecutor-General Ali Alqasi-Mehr, during which they inspected the situation of the detainees and spoke to some of them.

The spokesman hailed that the unrest had ended and “calm restored to the country under Leader of the Islamic Revolution Ayatollah Seyyed Ali Khamenei’s directions, and as a result of the separation of the ranks of the people and the rioters, and the effort expended by the security and law enforcement forces.”

The move prompted some peaceful protests, but riotous elements, abusing the situation, quickly entered the scene, destroying public property, setting ablaze banks and gas stations among other facilities, and opening fire on people and security forces.

There have been reports of fatalities among both security forces and civilians in different locations, with an official tally not available yet. On Wednesday, Iranians buried a serviceman and a civilian killed at the hands of the rioters.

According to Fars News Agency, the violence saw rioters setting fire to as many as 80 department stores across the country, incurring a damage of 170 billion tomans (more than $40 million). The damage has wrecked between 50 to 100 percent of the facilities’ structures, with the anarchists either looting the stores before setting them ablaze or setting fire to entire facilities and their supplies.

Esmaili said the country’s judicial apparatus had launched its work of detecting the roots of the issue and addressing the cases of every arrestee and riotous element.

Judiciary Chief Ebrahim Raisi has appointed a special committee to pursue the whole matter, tasking its members to personally visit the appointed detention centers, the official said, noting that his underway joint visit together with the prosecutor general had been undertaken within the framework of the committee’s mission.

Tehran’s Public and Islamic Revolution Courthouses have been appointed to conduct the legal proceedings arising from the cases, Esmaili noted.

According to the spokesman, a considerably higher number of people have been similarly identified by Iran’s Intelligence Ministry in connection with the riots. Some of these have been arrested or are about to be placed in detention, he announced.

He noted that all the suspects, who come under arrest as part of the country’s efforts to address the riots, would go through a screening process that identifies potentially blameless arrestees or those with little involvement in the disturbances. All the detainees, the official said, are, meanwhile, provided with the full range of their legal entitlements as the Judiciary chief has advised.

According to the spokesperson, the arrestees include those serving foreign interests, organized elements, and hooligans with multiple criminal records, who had amassed firearms, cutlasses, and incendiary materials to foment unrest.

Concerning their allegiances, Esmaili said, among those elements there are some tied to the anti-Iran and United States-backed terrorist Mujahedin-e Khalq Organization (MKO), royalists, separatists, who were nabbed in the country’s border provinces, and members of organized groups trained towards staging acts of sabotage.

‘Iran prides itself on its security’

“The security, which we have provided our people with, is what we consider to be a source of honor for us among the countries of the region.

We are prepared to sacrifice our lives for them,” Esmaili asserted, while advising that people with information and evidence concerning the riots come forward to help the process.

Tehran’s prosecutor general also noted that during the riots, the Iranian intelligence and security apparatuses had managed to timely and inclusively identify all disruptive movements from the very beginning.