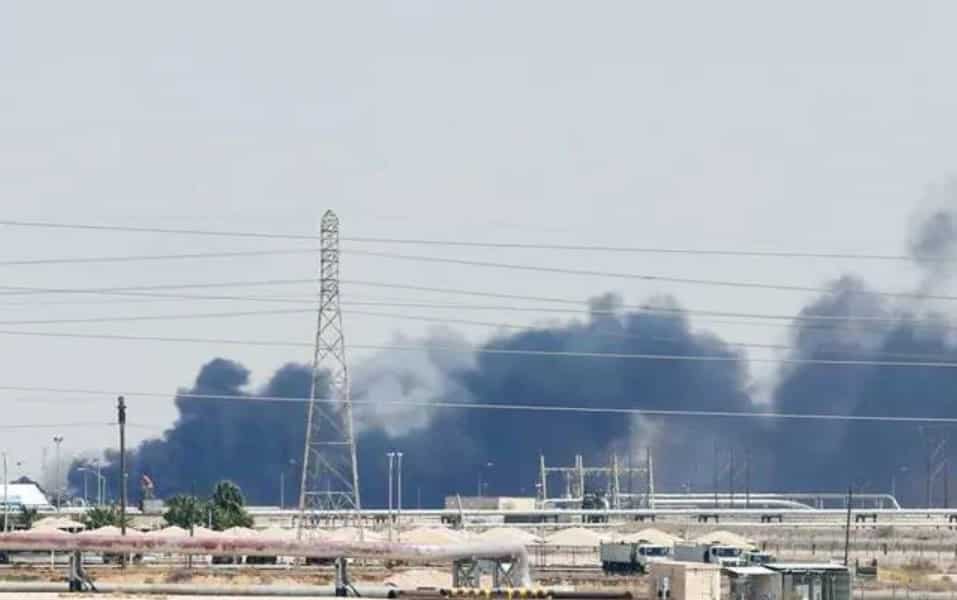 The September 14 attack on the Abqaiq petroleum facility in eastern Saudi Arabia was an Armageddon for the global oil industry because it processes five million barrels crude oil per day, more than half of Saudi Arabia’s total oil production.

The subversive attack sent jitters across the global markets and the oil price surged 15%, the biggest spike witnessed in three decades since the First Gulf War when Saddam Hussein invaded Kuwait in 1990, though the oil price was eased within days after industrialized nations released their strategic oil reserves.

Not surprisingly, 35,000 American troops have currently been deployed in their numerous military bases and aircraft carriers in the oil-rich Persian Gulf in accordance with the Carter Doctrine of 1980, which states: “Let our position be absolutely clear: an attempt by any outside force to gain control of the Persian Gulf region will be regarded as an assault on the vital interests of the United States of America, and such an assault will be repelled by any means necessary, including military force.”

It bears mentioning that alongside deploying several thousand American troops and additional Patriot missile batteries in Saudi Arabia in the aftermath of the Abqaiq attack, several interventionist hawks in Washington invoked the Carter Doctrine as a ground for mounting retaliatory strikes against Iran.

Although the Houthi rebels based in Yemen claimed the responsibility for the September 14 complex attack involving drones and cruise missiles on the Abqaiq petroleum facility and the Khurais oil field in the Eastern Province of Saudi Arabia, and they have UAV-X drones having a range of 1,500 kilometers, Washington dismissed the possibility.

Instead, it accused Tehran of mounting the attack from Iran’s territory, which is unlikely because Iran would never leave behind smoking gun evidence implicating Tehran, as the strategically vital Persian Gulf is monitored round the clock by American satellites and surveillance aircraft. The most likely suspects were Iran-backed militias in Iraq because the complex attack involving 18 drones and 7 cruise missiles was staged from the north.

Quoting Iraqi intelligence officials, David Hearst reported [1] for the Middle East Eye a day after the September 14 attack that the attack was mounted by the Hashed al-Shabi militia from its bases in southern Iraq. What lends credence to the report is the fact that in the weeks preceding the attack, Washington had accused the Hashed al-Shabi militia of mounting another attack in eastern Saudi Arabia claimed by the Houthi rebels because the oil-rich Eastern Province of Saudi Arabia is nearer the Iraq border than it is to the Houthi stronghold in Saada, Yemen.

Moreover, in the weeks before the attack, the Iran-backed militias blamed [2] the US and Israel in August for mounting airstrikes on their bases in Iraq targeting the missile storage facilities. The missiles were recently provided to the militias by Iran. It’s worth noting that 5,000 American troops and numerous aircraft are still deployed in Iraq, therefore the likely culprit targeting the Iran-backed militias in Iraq was Washington, not Tel Aviv.

Taking cover of the Israeli airstrikes, Washington has conducted several airstrikes of its own on targets in Syria and Iraq and blamed them on Israel, which frequently mounts air and missile strikes against Iranian operatives and Hezbollah militia in Syria and Lebanon, though it has never conducted an airstrike in Iraq because for that Israeli aircraft would have to violate Jordanian or Saudi airspace.

Besides the airstrikes on the missile storage facilities of Iran-backed militias in Iraq, it is suspected that the US air force was also behind a recent airstrike at the newly built Imam Ali military base in eastern Syria at al-Bukamal-Qaim border crossing alleged to be hosting the Iranian Quds Force operatives.

In addition to planting limpet mines on the UAE’s oil tankers and shooting down an American Global Hawk surveillance drone, the September 14 attack on the Abqaiq petroleum facility was the third major attack in the Persian Gulf against the interests of Washington and its regional clients.

That the UAE had forewarning about imminent attacks is proved by the fact that weeks before the attacks, it recalled forces from Yemen battling the Houthi rebels and redeployed them to man the UAE’s territorial borders.

Nevertheless, a puerile prank like planting limpet mines on oil tankers can be overlooked but major provocations like downing a $200-million surveillance aircraft and mounting a drone and missile attack on the Abqaiq petroleum facility that crippled its oil-processing functions for weeks can have serious repercussions. Unless Iran got the green light to go ahead with the attacks from a major power that equals Washington’s military might, such confrontation would amount to a suicidal approach.

Therefore, the recent acts of subversion in the Persian Gulf should be viewed in the broader backdrop of the New Cold War that has begun after the Ukrainian crisis in 2014 when Russia occupied the Crimean peninsula and Washington imposed sanctions on Russian entities.

In addition, Russia’s membership in the G8 forum was suspended by the Western powers in March 2014 and Russian President Vladimir Putin was snubbed at international summits by the Western leaders, by then-President Obama in particular, an insult that the Russian strongman took rather personally.

The Kremlin’s immediate response to the escalation by Washington was that it jumped into the fray in Syria in September 2015, after a clandestine visit to Moscow by Major General Qassem Soleimani, the wily commander of the Iranian Quds Force.

When Russia deployed its forces and military hardware to Syria in September 2015, the militant proxies of Washington and its regional clients were on the verge of drawing a wedge between Damascus and the Alawite heartland of coastal Latakia, which could have led to the imminent downfall of the Assad government.

With the help of the Russian air power, the Syrian government has since reclaimed most of Syria’s territory from the insurgents, excluding Idlib in the northwest occupied by the Turkish-backed militants and Deir al-Zor and the Kurdish-held areas in the east, thus inflicting a humiliating defeat on Washington and its regional clients.

Moreover, several momentous events have taken place in the Syrian theater of proxy wars and on the global stage that have further exacerbated the New Cold War between Moscow and Washington:

On February 7, 2018, the US B-52 bombers and Apache helicopters struck a contingent of Syrian government troops and allied forces in Deir al-Zor province of eastern Syria that reportedly [3] killed and wounded scores of Russian military contractors working for the Russian private security firm, the Wagner Group.

The survivors described the bombing as an absolute carnage, and Moscow lost more Russian nationals in one day than it had lost throughout its more than two-year-long military campaign in support of the Syrian government since September 2015.

A month after the massacre of Russian military contractors in Syria, on March 4, 2018, Sergei Skripal, a Russian double agent working for the British foreign intelligence service, and his daughter Yulia were found unconscious on a public bench outside a shopping center in Salisbury. A few months later, in July last year, a British woman, Dawn Sturgess, died after touching the container of the nerve agent that allegedly poisoned the Skripals.

In the case of the Skripals, Theresa May, then the prime minister of the United Kingdom, promptly accused Russia of attempted assassinations and the British government concluded that Skripal and his daughter were poisoned with a Moscow-made, military-grade nerve agent, Novichok.

Sergei Skripal was recruited by the British MI6 in 1995, and before his arrest in Russia in December 2004, he was alleged to have blown the cover of scores of Russian secret agents. He was released in a spy swap deal in 2010 and was allowed to settle in Salisbury. Both Sergei Skripal and his daughter have since recovered and were discharged from hospital in May last year.

Nevertheless, the motive that prompted the Vladimir Putin-led government to escalate the conflict with the Western powers was that the Russian presidential elections were slated for March 18, 2018, which Putin was poised to win anyway but he won a resounding electoral victory with 77% vote by whipping up chauvinism of the Russian electorate after the war of words with the Western powers.

In the aftermath of the Salisbury poisonings in March last year, the US, UK and several European nations expelled scores of Russian diplomats and the Trump administration ordered the closure of the Russian consulate in Seattle.

In a retaliatory move, Russia also expelled a similar number of American, British and European diplomats, and ordered the closure of American consulate in Saint Petersburg. The relations between Moscow and Western powers reached their lowest ebb since the break-up of the former Soviet Union and the end of the Cold War in December 1991.

A month later, an alleged chemical weapons attack took place in Douma, Syria, on April 7, 2018, and Donald Trump ordered a cruise missile strike in Syria on April 14 last year in collaboration with the Theresa May government in the UK and the Emmanuel Macron administration in France.

But the fact that out of 105 total cruise missiles deployed in the April 14, 2018, strikes against a military research facility in the Barzeh district of Damascus and two alleged chemical weapons storage facilities in Homs, 85 were launched by the US, 12 by the French and 8 by the UK aircrafts demonstrated the unified resolve of the Western powers against Russia in the aftermath of the Salisbury poisonings in the UK a month earlier.

[2] Iranian-backed militia blames US and Israel for attacks on bases in Iraq:

[3] Russian toll in Syria battle was 300 killed and wounded: