[ Editor’s Note: I have only shown one video as it is worth watching and an unusual one in that it has footage of close range shelling. That this attack got this far is hard to understand as it threatens key traffic on the M4 highway.

Go down below and take a good look at the large battle map now to locate how close the PoW camp is on the north side of the road. When you watch the video you will have a better feel for the perspective, like the 20mm gun firing and the video guy seem to right off the road.

Notice how the shelling around the camp never lands inside the camp, which has been abandoned, and that you can hear no Turkish plane overhead. That is how you know it is now from bombs, but shelling, very accurate shelling form the Turks as it is landing around the camp.

Next pay close attention to the footage as the Turkisk big MREP comes right to left across the screen in full open view of the 20MM and camera crew. It is a sitting duck for an anti-amour shot. I was actually waiting for a launch but it never came, despite being an obvious place to have one.

So one has to ask, when the Turks have a deep salient here, withing a golf club shot of sitting on the highway where they can actually take the road under fire any time they want, why have the SAA and SDF not done a pincer movement  from the flanks to cut the forward Turkish positions off?

It seems it is because there are no Turkish troops there, they are putting on a display of how they can put down a curtain of artillery anywhere they want to. You know Turkish troops are not around the camp position as the shelling would be right on top of them.

So there is some leg pulling going on here. Notice how we are told by an unknown press agency that 20 drone strikes facilitated the advance yet we seen the shelling hitting only in the open areas and the 20mm crew does not seem the least bit worried. The gunner is not even changing position or even behind a berm, which indicates he has not been under fire in that position.

At that distance he should have taken out the MREP, but he is shooting over it. As soon as you are doing, seeing no hits, then you are supposed to drop the barrel to hit the rounds hit ground in front of it and you can zero in on your elevation and range. But this guy is clueless, an ammunition waster.

Turkey does not need troops forward to monitor as it can just use drones and not risk personnel loses. These north Syria probes may be a way of keeping the SAA off balance on the resources in has available for using in the Idlib advance which we see is going at a snail’s pace.

And then we had Putin come right out and say he was not going to get involved (meaning using Russian air power) to stop Israeli attacks on Syrian or Iranian targets, despite the S-300’s being shown to be insufficient.

The article mentioned that Israel always warns the Russians of the attacks before hand. Does Russia not warn the Syria and Iranian missile crews, or would it not make any difference if it did? Inquisitive minds would like to know … Jim W. Dean ]

The Turkish attack on the town of Ain Issa in northern Raqqa was reportedly hindered by the staunch resistance of the Kurdish-led Syrian Democratic Forces (SDF) and the Syrian Arab Army (SAA).

A few hours after the beginning of the attack in the morning of November 23, Turkish-backed militants captured the village of Saida and Ain Issa’s refugee camp right to the north of the town.

The advance was facilitating by more than 20 airstrikes by Turkish warplanes, likely combat drones, according to the North Press Agency (NPA).

Despite their initial success, Turkish-backed militants failed to hold onto Ain Issa’s refugee camp, that was recaptured by the SDF and the SAA within a few hours. The forces are now carrying out a counter-attack on Saida.

The Turkish-led attack on Ain Issa, a center of Russian forces, is a blatant violation of Ankara’s recent agreement with Moscow on northeast Syria. This dangerous provocation could jeopardize the entire agreement. 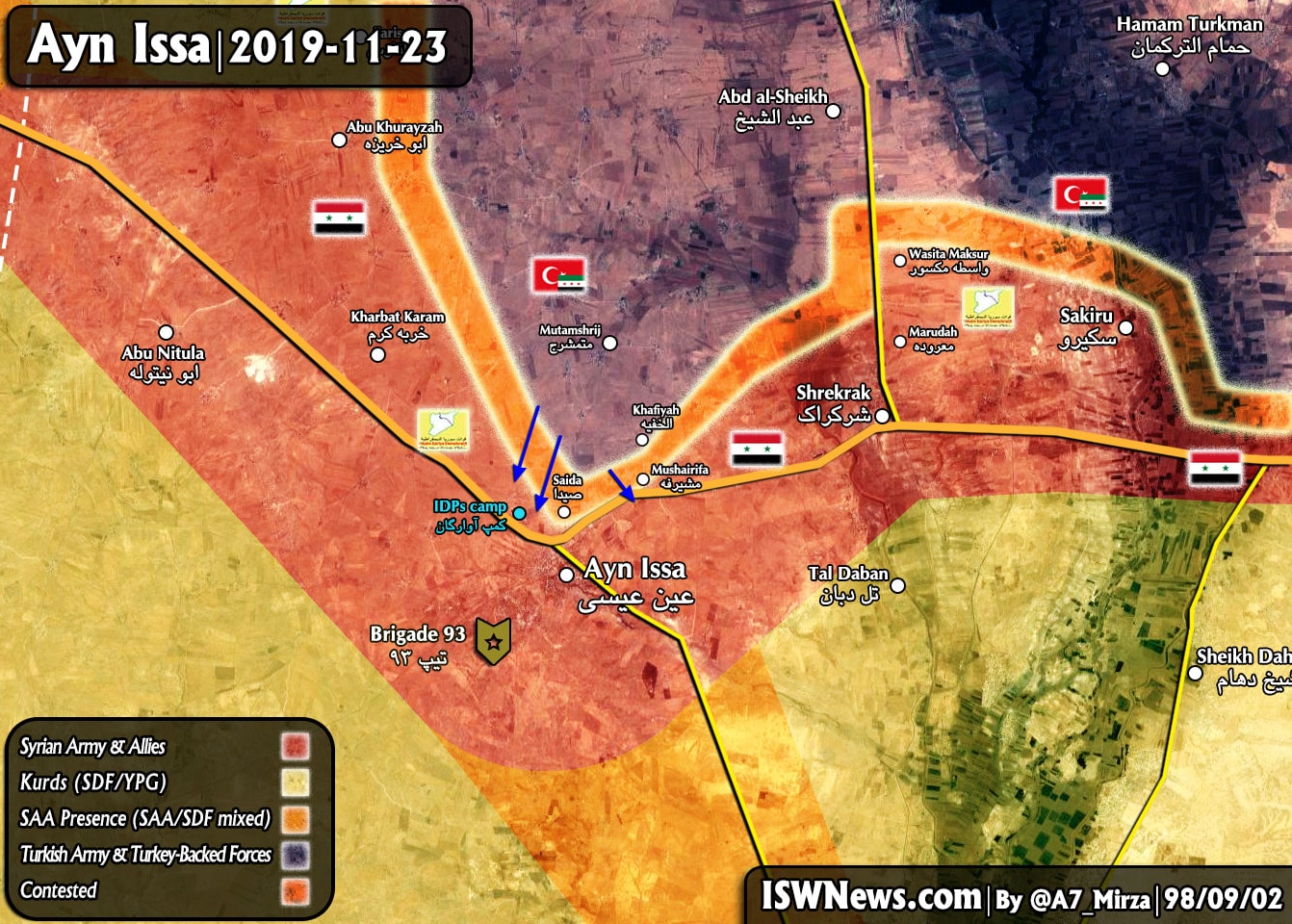