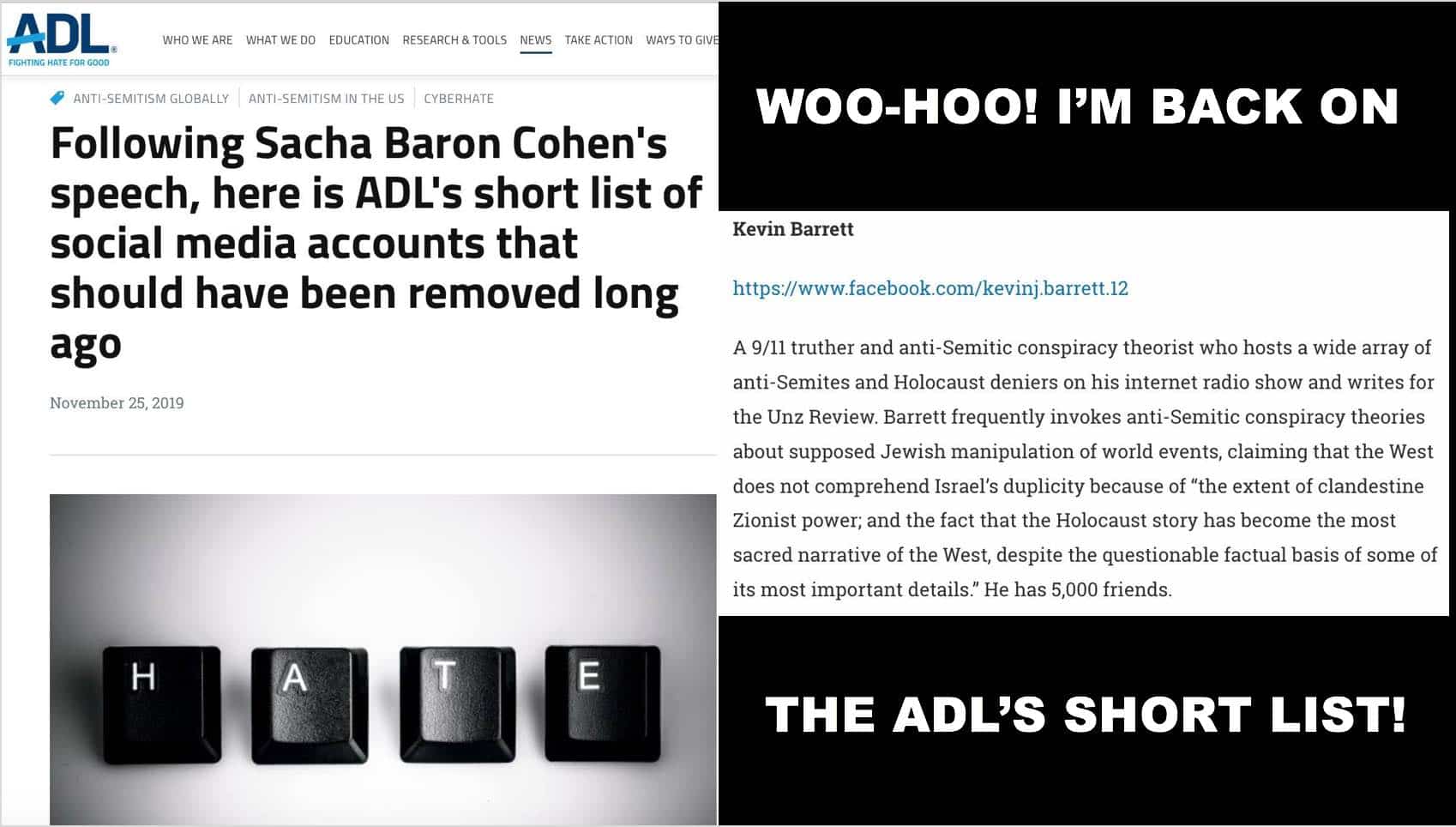 A few hours ago, when my wife got home from the store, I greeted her joyfully: “Good news! I just won an amazing award from one of the world’s wealthiest and most powerful organizations!”

“Really! They issued a ‘short list’ of the most notable people in the field, and I’m on it!”

“Can you guess which organization, and which field?” I gave her a hint: “I’m on the ‘short list’ alongside some of your favorite YouTube stars: Gilad Atzmon, E. Michael Jones…”

She broke into a broad smile. “You’re an anti-Semite!” she said triumphantly.

I can’t imagine how she guessed.

For background on the illustrious organization that just honored us, read Ron Unz’s “American Pravda: the ADL in American Society.”

The good news is that VT Senior Editor Gordon Duff and I were the only people on the ADL Short List who work for the same organization. The ADL must think VT is twice as dangerous as the competition. That’s quite an honor…almost a “Pulitzer Prize for anti-Semitism.”

The bad news is that the ADL, despite its billions of dollars, does not offer a cash stipend to accompany the “short list” award. If I were an anti-Semite, I would say something about how Jews are second in legendary greed and stinginess only to my own Scottish ancestors. But if I said something like that, the Scottish billionaires who run the world would probably create their own anti-bigotry organization and run me out of town. So I’m definitely not saying it.

But seriously, folks: Everyone else on the ADL short list, with the possible exception of Gordon Duff, is a lot harder on the Jews than I am. If you scroll back through my radio shows and articles and interviews and books, and stories covered on False Flag Weekly News, you’ll find that only a small fraction of the content—maybe ten to fifteen percent at most—is related to Zionism, Judaism, Jewish power, or anything Jewish-related. But I guess that 10% to 15% must be hitting ’em where it hurts. I would like to think the reason for that is simple: I’m fair-minded and accurate. I don’t come across as a bigot, because I’m not. Having a reasonable person saying true things about them must scare the pants off the Mega Group of ADL billionaires.

Here is why they want me purged from social media (my comments in bold):

“A 9/11 truther (in good company) and anti-Semitic conspiracy theorist (sounds bad, whatever that means) who hosts a wide array of anti-Semites and Holocaust deniers on his internet radio show (the percentage of my guests who even bring up Jews, Zionism, or the Holocaust is miniscule—so you want to purge me because you dislike maybe 2% of my radio guests?!) and writes for the Unz Review (whose editor, like way more than 2% of my radio guests, is Jewish). Barrett frequently invokes anti-Semitic conspiracy theories about supposed Jewish manipulation of world events (such as the creation of Israel—saying that millenarian-messianic Jewish ultra-nationalists were able to steal the Holy Land from both the Ottomans and the British due to being a wealthy and powerful community is hardly controversial), claiming that the West does not comprehend Israel’s duplicity because of ‘the extent of clandestine Zionist power; and the fact that the Holocaust story has become the most sacred narrative of the West, despite the questionable factual basis of some of its most important details.’”(If understatement were actionable, they could sue me for saying such things.) He has 5,000 friends.” (Actually closer to 10,000—they forgot my other Facebook account. I must be a terrible anti-Semite to have so many friends.)

So according to the ADL, the worst thing that I have ever said or written— after thirteen years of broadcasting about five hours of audio-visual talk shows per week for a grand total of more than three thousand hours of talk, plus millions of written words in books, articles, and blog posts—is this:

claiming that the West does not comprehend Israel’s duplicity because of ‘the extent of clandestine Zionist power; and the fact that the Holocaust story has become the most sacred narrative of the West, despite the questionable factual basis of some of its most important details.’”

If that’s the worst, most hateful thing I’ve ever said, somebody should put me on the short list for sainthood.

The ADL has praised me with faint damnation.