by Jim W. Dean, VT Editor,  …with New Eastern Outlook, Moscow …and the Institute of Oriental Studies of the Russian Academy of Sciences, a research institution for the study of the countries and cultures of Asia and North Africa.

[ Editor’s Note: The battle lines are being drawn in Israel as I am typing. Bibi is acting like a man that is sure he is going to be convicted and has nothing to lose by taking some Israeli institutions down with him to make it a bigger party.

Bibi’s attacks on everyone involved in the prosecution as coup plotters is the kind of incitement that got Yitzhak Rabin murdered, and the death threats are pouring in to prove it.

Gideon Sa’ar, who is challenging Bibi for the Likud leadership with a primary stated today, “I am forced to go through a campaign of incitement and libel against me and my family, including threats of violence.”

Attorney General Mandelblit, who indicted Bibi made a surprise ruling today, that for now he could remain as Premier as he has no Knesset to do business with. He is just a caretaker.

Bibi knows this and wants to prevent anyone else getting a government set up, as that would buy him more time through the summer by triggering a third election.

Bibi has called for a huge rally to hopefully intimidate his tormentors, causing the AG and everyone else involved in the case against him to need extra security to protect themselves AND families. Welcome to the Jewish homeland.

A citizen group case is being filed to ask the Supreme Court to make a quicker ruling that would be making new law, as there are no precedents to use for Bibi’s case. I am wondering how long it will be before they are all wearing body armor … Jim W. Dean ] 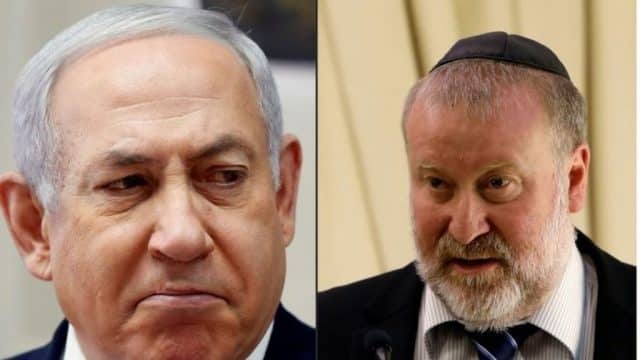 Benny Gantz turned in his mandate to President Reuven Rivlin four hours early to get the press interviews over and go to bed early Wednesday night, but little did he know what the morning would bring. As expected, both Bibi and Benny blamed each other’s inflexibility for the failure to form a new government.

The only way we will know for sure where to place blame is if a third election changes the political arithmetic with Israeli voters shifting positions. If they don’t we may just keep watching a country trapped in its own intransigence.

Israel’s political future has been thrown into a free-for-all contest, where any Parliamentary lawmaker can try to get 61 MPs together to attempt forming a government in twenty-one days. But even if those signatures are collected, if the group can’t agree on who gets what ministries, then it will be on to a third election within a year that 60% of Israelis say they don’t want.

An Israeli TV station reported after midnight that Attorney General Mandelblit was going to release his report on Thursday regarding the pending Netanyahu charges. The source was unattributed, but if it was true, I knew it would be the main election story today, so I held off sending in my article on the last day’s battle, where yesterday is already old news.

Looking back, we can clearly see that Mandelblit had made his decision on the indictments some time ago, but kept his cards close to his vest to avoid interfering in the ongoing political battles and to protect the independence of his office.

My mind was racing back to all the interaction photos where I had seen the AG at official functions with Bibi, sometimes sitting next to him, smiling and chatting, while the later was scrambling to hold on to his government position to have immunity from prosecution.

Bibi had prepared his response to unfavorable legal news and he was dramatic as ever, claiming, “We’re seeing an attempted coup by the police with false accusations.”

The Blue and White’s party leader Benny Gantz was also prepared for the AG’s news, stating that Netanyahu “proved he must leave his position and focus on his legal affairs,” and that there had been “no coup,” but Bibi wanted to entrench himself in power.

Mandelblit responded, “Law enforcement isn’t optional. It’s not a question of politics. It’s a duty incumbent upon us…. We were not swayed by slander from all sides, and acted only to enforce the law.”

Next, we will have a winding road where Bibi will request Parliamentary immunity. Israeli law only requires a prime minister to step down if convicted. It could take months for formal charges to be filed. With no current government, there is no sitting committee to even consider the request.

If the political standoff goes into a third election within a year, we would be facing Spring at the earliest to resolve the immunity issue, making it next summer before a formal indictment. Bibi is not down for the count by any means; but he is vulnerable politically and the sharks will be circling him.

Gantz’s researchers have already gone back to when former Prime Minister Ehud Olmert was facing bribery charges, where he was eventually convicted but only served sixteen months after having his sentence reduced. Here is what Bibi had to say about him at the time.

“A prime minister neck deep in investigations has no moral or public mandate to make fateful decisions for the State of Israel,” Netanyahu said of Olmert in a video. “There is a fear, I must say, and it is real and not unfounded, that he will make his decisions based on his personal interest for political survival, not on the national interest.”

I suspect we will be seeing these quotes spread all over the political blogs and even put up on billboards in Tel Aviv soon.

While Bibi’s legal battle goes on for months the political long knives will be out for those fighting to hang on to power and those wanting to grab it. On Wednesday as the clocked ticked down on Gantz submitting his mandate to President Rivlin, we found all the parties trying to gain a political edge from it at the expense of their competitors.

From the Likud party we had new party leadership candidate Gideon Sa’ar saying at today’s Jerusalem Post Diplomatic Conference that,

“If a new government won’t be formed and we go to new elections, it will not be reasonable that the prime minister will be successful in forming a government after a third election, so I think the necessary thing to do, if we are out in front of new elections, is to set a Likud primary. I think I will be able to form a government, and I think I will be able to unify the country and the nation.”

Avigdor Liberman, leader of Yisrael Beytenu put on the political fireworks show for Wednesday. He reached out to Left and Right to form a coalition, but only on his terms of Likud dumping his ultra-Orthodox Haredim factions, and Benny Gantz’s Blue and White giving the cold shoulder to the Arab Unity Party.

Lieberman ranted on, “We should say it as it is — the Joint List is really a fifth column. But unfortunately the Haredi parties are also becoming more and more anti-Zionist,” he charged. “It’s not just at the margins.”

He was referring to Satmar Rebbe arriving in Israel on Tuesday and claimed the sage “gave out millions of dollars” in an act of apparent “money laundering”, that should be investigated by the tax authorities. Ah yes, the Israelis do love to have their political opponents investigated.

In response the Haredi lawmakers, at no loss for words, charged that Lieberman was “anti-Semitic and a “czar,” and considered his speech as a “war crime” and a “horror show”.

From the United Torah Judaism MK Yisrael Eichler we have “What Liberman said today about the ultra-Orthodox community is a war crime. He is using methods of the Russian czar, who said ‘Strike at the Jews and save Russia.”

The UTJ head, Ya’acoc Litzman complained that, “We witnessed a shameful and ugly horror show produced by Liberman that was full of lies, ignorance and hatred worthy of the worst haters of religion and Jewish tradition of all time.” Lieberman had begun his next Knesset campaign, which Litzman said was “more anti-semitic than [any] there have been since the founding of the state.”

The Blue and White party has begun collecting MP signatures for Benny Gantz to form a government in the new political climate after the Netanyahu charges. And yes, they borrowed Bibi’s former words against Olmert when he was charged.

MK Yair Lapid, Gantz’ number two in the party added, “Netanyahu cannot continue to serve as prime minister and must resign. Thus ends an eventful day in the land of Israel.”

I suspect that this battle will continue for a long time, and a wounded head of state is a dangerous head of state. In this case we have one that might try to take the country into a war to rally the country behind him. Would Bibi Netanyahu do that? If he thought it might keep him out of prison, I think so.

Now, the Institute of Oriental Studies of the Russian Academy of Sciences is a research center where history and culture, economics and politics, languages and literature of the countries of Asia and North Africa are studied. The chronology covers all periods of the history of the Orient – from antiquity to the present day. About 500 experts work there.]