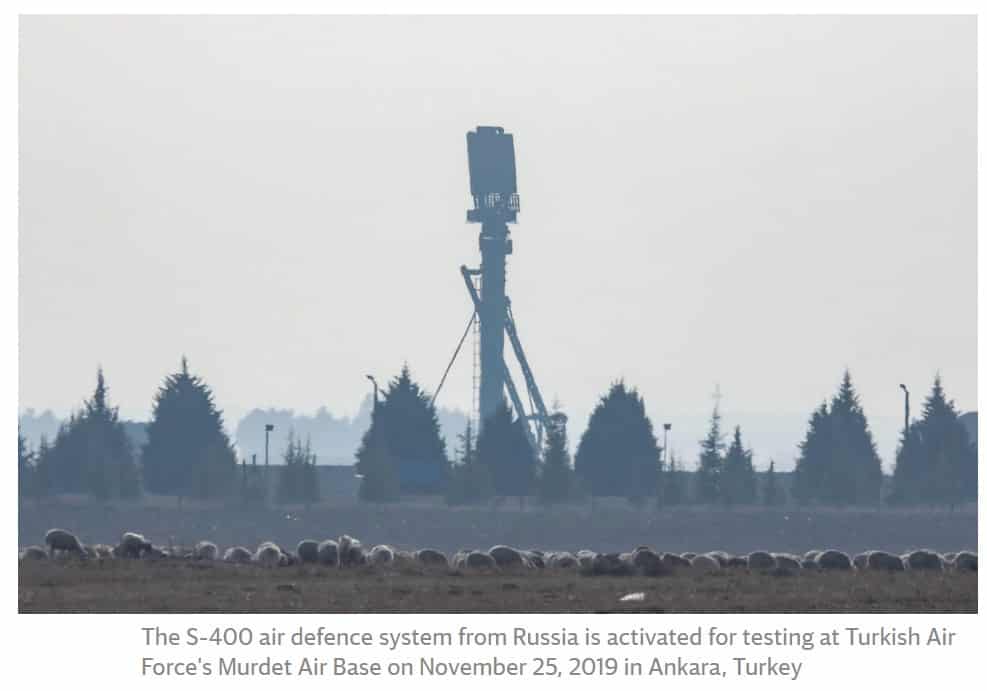 Introduction
The US is screaming about Erdogan using his new Russian S 400 system to track American planes, testing out targeting radars.  The US admits that pilots of F 16s flying in the Middle East have been “lit up” by the Russian system that “sees all/kills all.”
–
The real scare for Washington is the F35, that Erdogan is now tracking American and Israeli stealth jets, something otherwise impossible, and cracking their flight characteristics, mission “packages” and electronic signatures, making them a “sitting duck” for whenever Russia decides to “lower the boom.”
–
What is forgotten is that Russia has their own S400 in the region and has had for two years.
*
RT/Moscow: President Recep Tayyip Erdogan is mocking the US and has crossed a new “red line” as Ankara decided to start testing its S-400 air defense systems, a US senator said, calling for new sanctions against Turkey.
–

Turkey’s persistence in its desire to actually use the armaments it procured from Russia was bemoaned by US Democratic Senator Chris Van Hollen in a bitter tweet.The official said that Ankara’s push for testing radars of the S-400 systems just two weeks after Erdogan’s visit to the US is an insult to Washington and open mockery of the US president.

Two weeks after his WH visit, Erdogan is thumbing his nose at Trump, the US [and] NATO, and crossing another red line on S-400s.

The senator called upon Trump to impose sanctions on Ankara over this behavior, as well as remembering the Syrian Kurdish-led militias – once the main US ally in the fight against Islamic State (IS, formerly ISIS).

Ankara, however, regards these militias as “terrorists.” Turkey’s “attacks against Kurds” must be called out by the US Secretary of State Mike Pompeo, Van Hollen said.

The S-400 issue has been one of the main sources of tensions between the US and Turkey for months already, and Washington repeatedly pressed Ankara into abandoning the deal with Russia, yet to no avail.

The delivery of the systems began this summer, ultimately resulting in the US’ decision to suspend Turkey from the F-35 fighter jet program. Ankara, however, maintained it was free to purchase armaments from wherever it likes and signaled it might seek alternatives for the F-35s elsewhere.

The hot topic was discussed by the two presidents during Erdogan’s visit to Washington earlier this month. According to Trump, Ankara’s purchase of Russian-made systems “creates some very serious challenges” and the two leaders tasked their national security advisers to “immediately” resolve this issue after the talks.

Despite all of that, Turkish Defense Minister Hulusi Akar confirmed the S-400s will be activated once the military personnel receives all the training needed. Still, they will not be integrated into NATO’s military network and operate in “stand-alone” mode. Turkey’s S-400s are expected to enter combat duty next April.