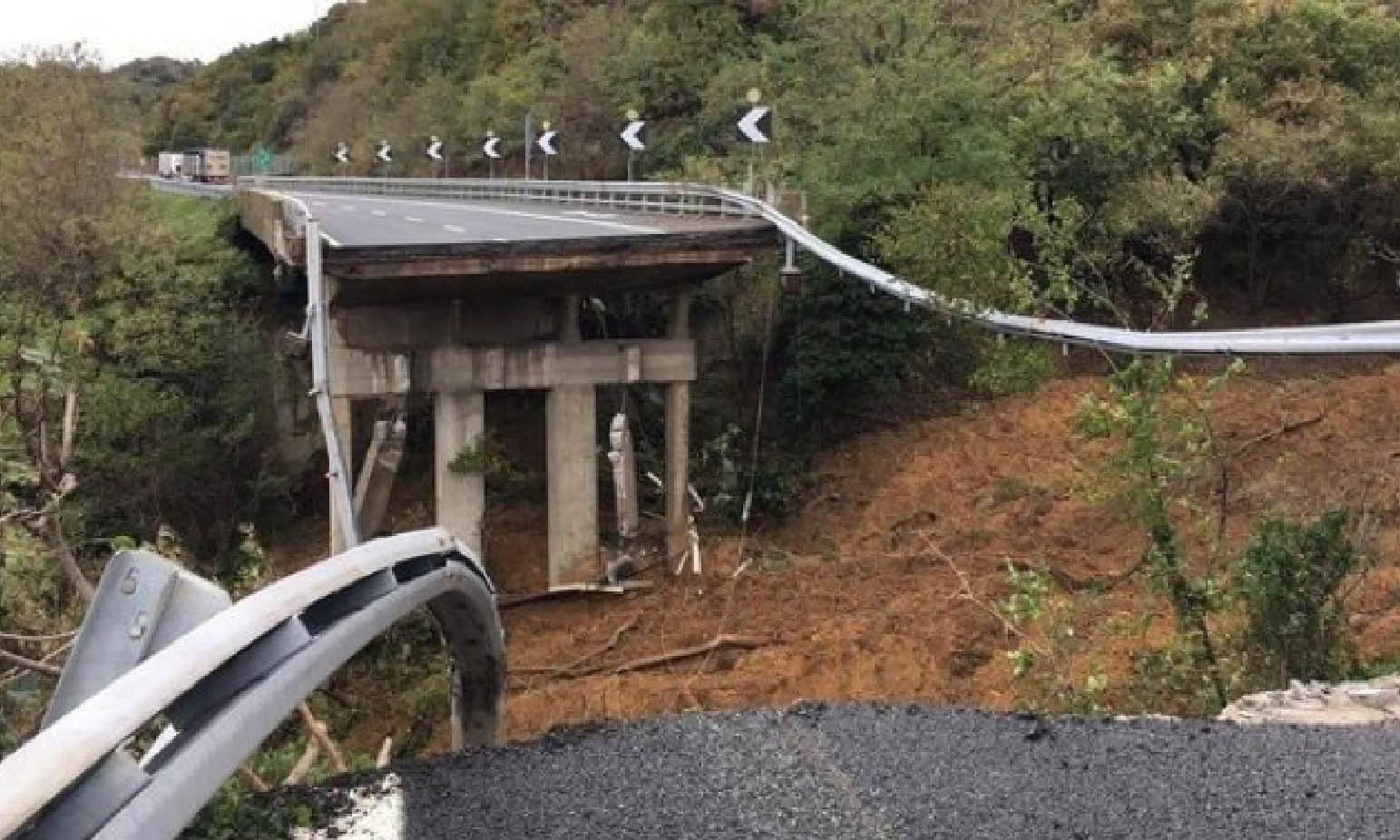 Morandi Bridge Victims’ Committee:
“We ask for the Government’s serious commitment
and the reversal of the course towards justice”

The decadence of the Italian Republic founded on work – occult, of Freemasonry and of the Mafia – is going on in a hurry. One of the spies of the level of neglect in the nation emerges from the critical condition of the motorway network at the center of scandals, judicial investigations and viaduct collapses.

Also in Prague, in Germany and in Austria in these hours there are the victims of floods but not the collapsed infrastructures !!!

After having come across during every holiday the simple work of restoring the road surface with the excuse that the draining asphalt wears faster, after crossing viaducts feeling sinister crunches until they have begun to precipitate after decades of inadequate maintenance like all investigations on the collapses have revealed, it took the 43 deaths of the Ponte Morandi, which also broke in the rain of August 14, 2018, to shake up – little little – politics and the judiciary. The following links of this item prove its verifiable validity.

We suspend all reasoning for a moment out of respect for those victims and leave the floor to those who represent them.

«In relation to the collapse that occurred yesterday on the A6 we cannot avoid our reflection, for pure chance and by immense fortune no other innocent people have died, and there are no other relatives sunk in grief; the citizens must be protected, only with serious prevention, as we have repeatedly stated, we can eliminate all avoidable tragedies» declares Egle Possetti, President of the Memorial Committee Victims of Ponte Morandi in a press release.

«We ask for a serious commitment of our Government and Parliament so that our country is made safe from infrastructure, hydrogeological, seismic, etc. risks, and every trip does not become a Russian roulette. For us yesterday it was like going back 15 months and left us once again breathless. Many associations of family members who have died due to absurd tragedies await a sign of reversal of course and of navigation towards justice» adds Committee.

All the media attention was concentrated above all on the Madonna del Monte viaduct stretch swept away by a landslide on the A6 Torino-Savona, where the massacre was averted by the security guard Daniele Cassol who managed to stop with the car on the eyebrow of the abyss and waving as far as it can has arrested the other vehicles on arrival including a bus.

The videos and the resounding images of this truncated net bridge like that of Genoa have obscured the impressive chasm created on the A21 Turin-Piacenza, in some ways even more disturbing than the episode of the director who links Piedmont to Liguria, both devastated by extraordinary floods that in the Alessandria area also killed a motorist who was swept away by the waters of the Bormida river, like those of the Po at Cardè, in the Cuneo area.

The Piedmontese governor Alberto Cirio as the Ligurian governor Giovanni Toti have already announced the request for a state of emergency for natural disaster. Anyway the question is far more complex.

On the A6 the bridge in the section between the two pylons fell about thirty meters, dragged away by the collapse of a hillside, which collapsed due to heavy rains. In the ditch that has been produced, no more than ten meters deep, one can see some motorway signs still standing, driven into the asphalt, almost intact, and uprooted trees.

But on the Turin-Piacenza the street slab has literally vanished in a big hole inside the earth, as unfortunately happened frequently in the city of Rome. The images look like those of an apocalyptic film: 2012. Who saw it knows what I mean …

If someone is just passionate about mysteries and the supernatural, observes the coincidence that the two highways affected by the failures start from Turin, known for its esoteric history but also the epicenter of the Masonic conspiracy that in 1870 in order to complete the Unification of Italy he did not hesitate to assault the walls of the Papal State: undermining the earthly and human “bridge” towards spiritual and heavenly transcendence.

Looking away from the sky to bring it back to the earth, today more and more marauding floods from monsoon but above all corruption from Masonic power, we discover that the episodes are so many that they do not represent anymore the criminal and occasional action of some profit-seeking manager to the point of renouncing the most elementary maintenance, as emerged from the survey on the 40 deaths of the bus crashed in 2013 from the Aqualonga viaduct of Avellino and also from the first rumors about the investigation on the Ponte Morandi.

No! All this is the mirror of a management system of the motorway network, hastily privatized by the DS Government (today PD) in 1999, scandalous, shameful not to say infamous.

The wiseacre engineeers will be able to go into the details of the individual episodes proving that there are unexceptionable technical explanations and extraordinary fatal causes: there was even an expert who dared tell to the Genoa prosecutors that the Ponte Morandi would have collapsed for the steel coil that fell violently onto the viaduct slab from a passing truck.

read more THE SILENCE AND DIVERSION ON PONTE MORANDI’S COLLAPSE

Fortunately, I am not a magistrate, because otherwise I would have arrested that person not only for false testimony but also for contempt of the State because the malicious impudence with which he supported his thesis recall those with which authoritative professionals of the fee sought in any case to deny the hypothesis of the missile in the Ustica massacre, where in 1980 81 passengers of the Itavia flight sank and died.

In this climate where the lies in office deeds are now blatant and are even exhibited with lots of creative hypertenic justifications, fortunately, some truth emerges. It is the Messenger who gives space to the geologist (link at the end of the article) who asserts that 80% of all European landslides occur in Italy. In a few days there will be the honest architect who will tell us that 70% of the viaduct collapses in the EU countries take place in Italy (it is a percentage thrown by me at random).

In the last few hours the Public Prosecutor’s Office of Genoa had closed the traffic on both sides of the A26 motorway between the connection with the A10 motorway and the Masone junction from 9:30 pm on Monday 25 November. This measure is taken to allow the execution of technical checks on the Fado Nord and Pecetti Sud viaducts, present in this section, deemed to be deteriorated.

The Pecetti bridge had come to the center of the Morandi bis investigation with which it had induced the magistrate of the Court of Genoa to order house arrest for some executives of the companies Autostrade per l’Italia and Spea, both of the Atlantia group, for conditions reports of falsified viaducts as also emerged from disturbing wiretaps. However, it should soon be re-opened in a small part with a roadway exchange that will allow the use of a lane for each direction of travel.

As reported by Gospa News, in the past months an engineer has explained why the cyclopean work of the Mose of Venice, the system of gates that should protect the lagoon city from high water, is in very serious delay: because the type of steel was used wrong … While in the Netherlands the anti-flood dams work great!

The immense corruption of the political-Masonic-Mafia triad in recent years in Italy has revealed how decisive the fourth bank of this pyramid of speculation and robbery was: the magistracy!

I have written at least a dozen detailed reports on the management of Autostrade per l’Italia, which is controlled by the financial company Atlantia, which cannot be touched by anyone, being shareholded by international funds such as the American BlackRock of a New Yorker Zionist and the Cassa di Risparmio di Torino Foundation …

This time the viaduct collapsed on the A6 and the abyss on the A21 are beyond their competence (the managers are others) but the Benetton family group remains however the epiphenomenon of that system of management of public goods clearly rotten, protected by politics but also from sentencess of justice, which is pouring its dramatic consequences on the lives of citizens who happened by chance into the Russian roulette of neglect.

Or we accept this dramatic reality and try to remedy it.


IL MESSAGGERO – IN ITALY MORE FRANES THAN IN ALL EUROPE