by Gordon Duff, VT Sr. Editor,  … with New Eastern Outlook, Moscow …and the Institute of Oriental Studies of the Russian Academy of Sciences, a research institution for the study of the countries and cultures of Asia and North Africa.

[ Editor’s Note: VT has some things in here that have never been published before. Why now one could reasonably ask? That would usually be due to timing, based on what else is going on now, and things that are in the works.

Between now and Trump’s state of the union address he may have a bumpy road to travel. If he gets hurt bad in the impeachment process, not that the Republicans would ever find him guilty, but that more could still be in the closet.

What if the stuff still in the closet is worse than anything on the table, and frustrated parties decided it was now or never time to release? What would Trump be capable of doing to protect himself from losing out on a nice cushy rest of his life on the world stage as an ex-US president?

Some of the things below are just a tiny sample of what is out there, plots to really make things much worse that did not come to fruition, yet. VT editorialized endlessly that if those responsible for doing very bad things, 9-11 is just one example, were left to roam around the planet, they would not be running charities to repent for their evil deeds.

They would be planning the next one. Why? It’s because they feel it is their right, and after 9-11 was covered over they have 100% confidence that they are not touchable. So far the entire network has not been touched.

Yes, some of their plans have been foiled. Iraq survived, and Syria now, and Iran has taken everything thrown at it and getting stronger everyday, while Bibi may be wearing prison pajamas in a twin cell being saved for his best buddy.

What would such people do to save themselves? What would they have to lose by trying, with one last jihad, and take a lot of us down with them?… Jim W. Dean ] 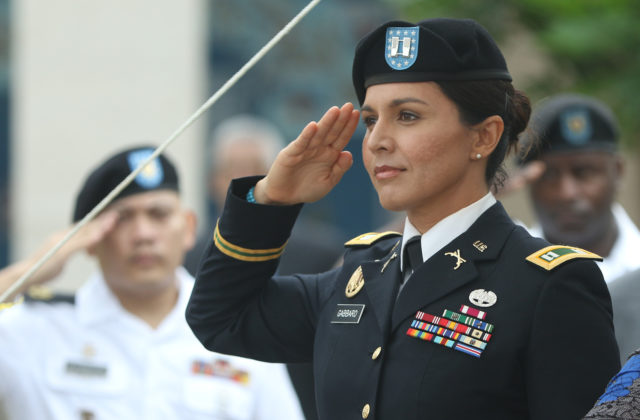 We begin with a rash statement or is it? As the Democratic Party in the US self-destructs, with 3rd rate candidates turning on one another like ravening rats, one candidate stands above the others, Rep. Tulsi Gabbard of Hawaii.

In 2017, Tulsi Gabbard, or we may well call her US Army Major Tulsi Gabbard, a decorated combat veteran, traveled to Damascus and met with, among others, President Assad. This fact is used continually by a cacophony of fellow Democrats to damn Gabbard as “unfit.” What are Gabbard’s real beliefs?

Let us put this one thing up front, she promises an end to regime change wars America seems to continually engage in, now decade after decade, though she withholds, quite carefully, what needs to be done as well.

America’s regime change wars are all fought on behalf of the gangsters, the “Kosher Nostra” as it were, that controls the military dictatorship that has become Israel under the Likudists and the billionaires and “oligarchs” who have bought Netanyahu into power time and time again despite the wishes of a majority who vote against him in every election.

Who is Assad? Well, he spent much of his life in London, he is a medical doctor, qualified for general practice with a specialty in ophthalmology.

His personal politics are simple, he is a liberal democrat, by American standards, or “labor” as they might well call it in the UK, extremely popular in Syria and elected by landslide.

He and his wife travel within Syria with no security. He drives himself and will show up unannounced, as I have seen him, strolling through the lobby of the Dama Rose Hotel in Damascus, no bodyguards, and, quite frankly, no one seems to notice.

He is generally well liked with American, British and French political leaders but none will stand against the Deep State’s orchestrated attacks with the exception of Tulsi Gabbard and perhaps John Kerry.

What are his accomplishments? Singularly, out of will alone, that and the sacrifice of the Syrian people, victimized by not only ISIS and al Qaeda but by the US, Britain, France, Turkey, Israel and Saudi Arabia as well, he has held Syria together when smart money bet he would go down.

You see, the occupation of much of Syria by “freedom fighters” recruited and paid for by the Deep State, could not have caused so much suffering and hardship were it not for so many governments, so many corrupt governments, who sought a Middle East ruled by a nuclear armed Islamic State.

That state, run by crisis actors and fakes from the Mossad, CIA, MI-6 and so many other organizations, were following the plan America’s neocon rulers laid out after 9/11, a plan that would put the region under American control, looted and stripped bare.

The methodology of Rice, “Wolfie” and gang was never laid out in detail but always included the use of CIA surrogates, false flag terrorism, fundraising through narcotics and organ thefts, and of course a fake Islamic movement paralleling the Muslim Brotherhood, but with many new twists as we were to see.

As for “nuclear,” this was always the plan. When Mosul fell to ISIS, the nuclear research facility there began developing the capability of producing mid-third generation, yet still highly classified, moderate yield fission weapons, in the 2 to 10 kiloton range.

Advances in weapons design, plans stolen from the US during the Clinton administration, outlined procedures for turning nuclear fuel into atomic bombs, not “dirty bombs,” not “fizzlers” but designs for weapons that maintained sufficient chain reaction capabilities to rival the weapons used by the US against Japan during the waning days of World War II.

Between 2015 and 2017, shipments of nuclear material amounting to tens of tons were seized on the way to the ISIS capitol at Mosul, seized in Ukraine, Georgia, Romania and Turkey, transited by NGO’s (Non-Governmental Organizations) supposedly tasked with operating hospitals and providing “civil defense” in regions of Syria controlled by the so-called “Free Syrian Army,” according to sources at the IAEA.

For every shipment seized, how many got through?

Other accusations have been made as well, that the US held up the fall of Mosul for many months, even openly warring on Iraq’s Shiite militias that were storming ISIS positions, in order to allow ISIS to complete its first weapon.

When we look at Syria today, we see America dug in along the Eastern bank of the Euphrates, blocking Syria’s oil supplies, which will lead to another cold winter for suffering millions at the hands of the Trump administration.

Yet, without the US presence, ISIS is beaten, beaten by Assad, beaten by the Syrian people and the Syrian Arab Army that beat ISIS into the ground despite continual attacks by American and Israeli air forces.

Tulsi will never be able to say these things, they will never be published in the US, nor will the American, British or French people know how close the world came to having a terrorist state go nuclear.

One might ask why the US, Britain and France, perhaps we might well add Israel and Saudi Arabia to the list as well, allow such a thing? Then we might remember, Israel is a nuclear state and continually announces to the world its “Samson Plan” capability, to take the world down with it if Israel is threatened, incinerating every European capitol.

With Syria and Iraq conquered, ISIS would have an air force, a small navy of mostly patrol boats and, of course, would take over the Russian naval base at Tartus.

What kind of neighbor would such a nation, run by “head choppers” and fanatics, or so we are told, be for Israel or Saudi Arabia? Yet the idea of a power endlessly greater than Saddam’s Iraq, one exceeding his brutality and extremism many times over seemed not just acceptable but gleefully so.

Then we ask, but what would it all mean to America, if Assad had not defeated ISIS as his forces are now crushing al Qaeda in Idlib Province as well?

What damage might a former Syrian or Iraqi patrol vessel with a nuclear weapon onboard mean to targets such as the Suez Canal or even New York harbor?

What if Iran fell to ISIS, as was in the original plans drafted by the Bush (43) White House? The nukes would get smaller, so much smaller, the missiles would grow in range and a terror state of up to 200,000,000 would eventually face off with American power or would it be a secret surrogate of the Deep State that controls America and its allies?

Now, the Institute of Oriental Studies of the Russian Academy of Sciences is a research center where history and culture, economics and politics, languages and literature of the countries of Asia and North Africa are studied. The chronology covers all periods of the history of the Orient – from antiquity to the present day. About 500 experts work there. ]