[ Editor’s Note: Saudi Arabia put its foot in its mouth today, compliments of its ambassador to Egypt, demonstrating that not only are the Saudis hopeless with their military forces on the ground in Yemen, but their diplomatic corps follows right behind.

Ambassador Nuqali’s charges of Iran being behind all the street protests in Iraq seem to be a knock-off of Mr. Pompeo’s tactic of making claims and threatening a military response, but leaving out the evidence.

This burning down the Iranian consulate in Najaf was a classic Intel operation, holding a march to protest conditions in Iraq with corruption being the main target, followed by the marchers turning on a dime and torching the consulate, which had no special security because there had been no previous threat.

Nuqali continued his fraud by advancing some mythical “brotherly ties” with Iraq, a Mother Goose story, when everyone knows the Saudis were up to their eyeballs in supporting the ISIS attack on Iraq in an attempt to break off its western region to block ground supplies and future pipelines going into Syria from Iraq and Iran.

Even Iraq repudiated Nuqali’s baseless charges when its foreign minister apologized to Iran for not having more protection for the consulate. If Iran had wanted to cause a disturbance in Iraq, it would have done so with the million Iranian pilgrims inside Iraq during the holy Arba’een march to Karbala.

So what really happened? Well the Iraqis were smart enough to take a break from the street protests, as everyone wanted the huge influx of Iranian pilgrims, some walking 500 miles to get there, with Iraqi Shias providing free logistics support along the route.

Western media has historically ignored reporting this event, as there is nothing else in the world that can compare to it as an example of religious piety and communal solidarity. I hope to attend some day to see it in person and shoot some footage… Jim W. Dean ] 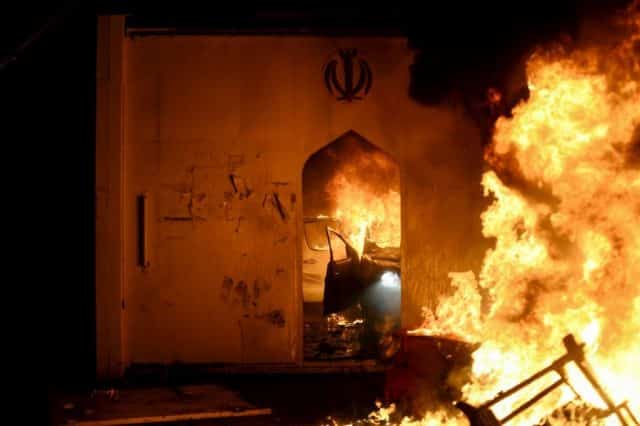 A day after rioters set fire to Iran’s consulate in the Iraqi city of Najaf, a high-ranking Saudi diplomat has threatened the Islamic Republic with “worse.”

On Wednesday night, a group of rioters used peaceful protests against government corruption and poor public services as a cover and stormed into the Islamic Republic’s diplomatic mission in Najaf, setting it ablaze.

Saudi Ambassador to Egypt Osama bin Ahmed Nuqali said Thursday that the incident was a direct result of Iran’s regional policies and that Tehran should wait for more such attacks.

“What happened last night to Iran’s consulate in Najaf was the result of what Iran has committed and they should wait for more reactions,” Nuqali was quoted as saying by Arabic newspaper Anba’a al-Youm. adding. “What comes next won’t get any milder than this.”

Hailing what he described as brotherly ties between Iraq and Saudi Arabia, the envoy said Riyadh was ready to help “rescue” Baghdad and “rid it” of Tehran’s influence.

Saudi Arabia reopened its consulate in Iraq’s capital city, Baghdad, in April, ending a 25-year hiatus after it unilaterally cut ties with Baghdad over its invasion of Kuwait under former dictator Saddam Hussein.

Nuqali repeated Saudi allegations that Iran was “destabilizing” other countries across the Middle East, including Yemen where the Riyadh regime has been waging a deadly war since March 2015, killing thousands while destroying the impoverished country’s infrastructure.

The Saudi envoy accused Iran of arming the Houthi Ansarullah movement, which has been pushing back against the Saudi-led aggressors. Iran has in the past vehemently denied the Saudi charges.

Nuqali also accused Iran of destabilizing Lebanon and Iraq, which are both dealing with anti-government unrest. The riots in Iraq are part of an ongoing wave of anti-government rallies that Iraqi officials say have been hijacked by certain players.

Local authorities have yet to reveal the exact number of casualties in the consulate attack, which led to the imposition of a curfew in Najaf.

On Thursday, Iraqi Foreign Minister Mohammad Ali al-Hakim called his Iranian counterpart to apologize for Baghdad’s failure to protect the mission against the arsonists. He told Mohammad Javad Zarif that Baghdad was committed to protecting Iranian diplomatic missions and their staff in the Arab country.