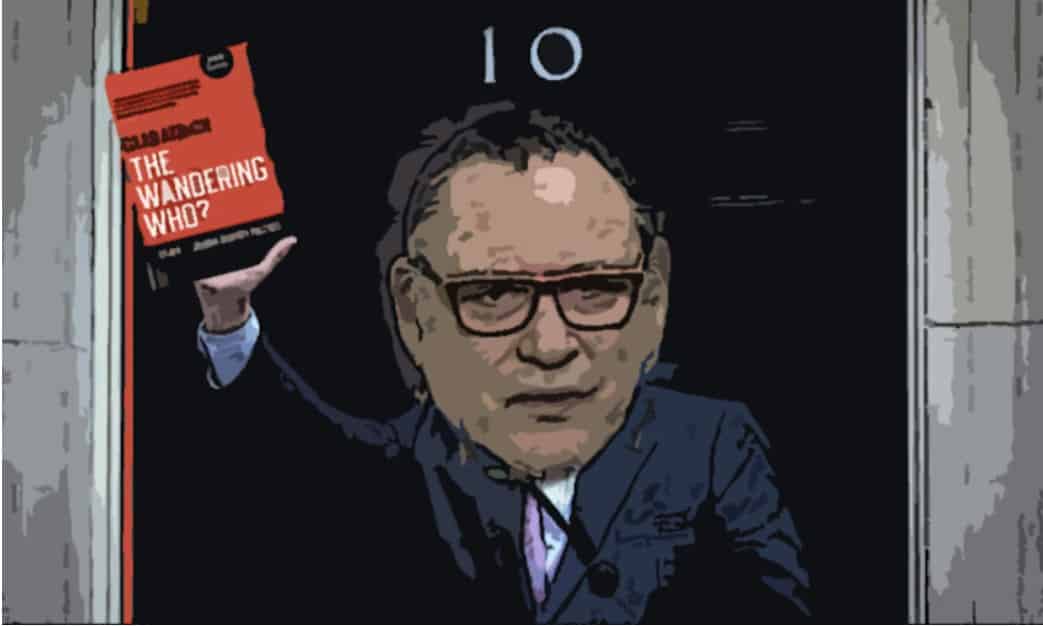 For the last 15 years I have been warning both Brits and Jews of the possibility of serious consequences that might result from the intensive activities of the Jewish Lobby in Britain and beyond. I have written thousands of commentaries about the topic, given endless talks and interviews and published the best selling books on Jewish Identity politics in return for which I have received relentless abuse.
However, I survive and with just a bit of luck Britain may also survive the present chaos inflicted on it by the Lobby and by its own compromised political establishment.
–

For the last three years we have witnessed an orchestrated smear campaign conducted by many Jewish institutions against British political parties, politicians, intellectuals, artists, and various other members of the public.  The Labour Party has been subjected to a uniquely vile smear campaign: its leadership accused of being ‘anti-Semitic.’ The Labour Party, not, perhaps, a collective of distinctly sharp minds, was clumsy in its attempts to counter these empty accusations.

The Party foolishly responded by surrendering to the  Lobby’s every demand: suspending and expelling some of its best members for telling the truth about Palestine and accepting the primacy of Jewish suffering by adopting the IHRA definition of antisemitism. The Party and its leader repeatedly apologized to the Jewish community for acts it hadn’t committed although this failed to assuage the Lobby’s unquenchable appetite.

In July 2018,  the three British Jewish newspapers united in an attempt to finish Corbyn’s political career by  simultaneously issuing a joint  editorial that declared:

“Today, Britain’s three leading Jewish newspapers – Jewish Chronicle, Jewish News and Jewish Telegraph – take the unprecedented step of speaking as one by publishing the same front page. We do so because of the existential threat to Jewish life in this country that would be posed by a Jeremy Corbyn-led government.”

Since then Corbyn has been accused by  Labour MP Margaret Hodge and other Jewish celebrities   of being “racist” and “an anti-Semite”. In a uniquely foolish move that conveys a severe inability to read his neighbours’  mood, British Chief Rabbi Ephraim Mirvis has launched an explosive and unprecedented attack on Jeremy Corbyn calling on the Brits not to vote Labour.

When Rabbi Mirvis published his article the Tories were leading in the polls by 12-14 percent. Then came a remarkable shift. Corbyn was confronted by the BBC’s Andrew Neil who no doubt expected him to offer his customary words of appeasement but for some reason, this time the Labour leader refused to provide the goods. Four times Neil used the BBC to demand Corbyn’s apology and each time the Labour leader demurred.

Corbyn stood firm and in the next poll, not surprisingly, the Labour Party bounced back.  The Tories and their leader, or so I read in the press, are in a panic and for good reason. A hung parliament may well result in Corbyn being the next British prime minister. Leading polling expert Sir John Curtice has warned that the recent election headlines predicting a Tory landslide were premature.

The Brits have had enough of foreign Lobby interference with their politics. They are tired of a hostile pressure groups  weaponizing anti-Semitism, vandalising their culture and politics and openly defying the Athenian roots at the core of the British value system and its ethos.

The outlandish conduct of British Jewish institutions is perplexing. The Jewish press, the Chief Rabbi, the unelected BOD that claims to represent British Jewry have all apparently focused their energies on smearing Britain’s opposition leader.  But here is an interesting riddle. Jewish institutions and celebrities have repeatedly described Corbyn as an “existential threat to British Jews.”

They practically equate the life long anti racist campaigner with Hitler. I assume that British Jews know that in 1933 Hitler won the German election with the support of just 33% of the German population. As of yesterday’s polls, Corbyn and the Labour party enjoy the same level of support from the British public.

I reckon that if these Jewish institutions really believed that Corbyn is a Hitler figure as he is so often outrageously described by their leaders and press, the fact that a third of the Brits support him would mean that Britain is the new Nazi Germany and a Shoah is just around the corner.

If British Jews really believed in such a ludicrous scenario there would be a mass exodus of Jews out of Britain and real estate prices in North West London would plummet. As of now, this is not the case. The cost of a three bedroom house in Golders Green is still way above the British average.

Jewish power is a sophisticated apparatus. In fact it wasn’t the British politicians or establishment that defied that treacherous spirit that has haunted British politics for too long. It is actually the British people who have stood up and said, essentially, ‘enough is enough.’

A video popped out this weekend showing health secretary Matt Hancock being  humiliated, booed and heckled at a general election meeting. In response to the Tory MP attempt to recycle  the ‘antisemitism’ spin, the entire gathering protested and ousted him within seconds.

The sudden unpredicted rise of Corbyn and Labour’s popularity is a fascinating phenomenon in light of  the failure of the dysfunctional British institutions to defend elementary freedoms in the kingdom. The transition of the Guardian, once a respected outlet, into a ‘Guardian of Judea’ is almost as compelling as the transformation of the BBC into BiBiC. Yet, in Britain, only a few brave souls have dared to look into these topics. David Icke has been doing an incredible job of this for which he has been subjected to relentless abuse. Stuart Littlewood has produced a substantial body of work on Zionist and Jewish pressure groups. Craig Murray has written a number of commanding articles about the Israeli grip on British politics. Jonathan Cook watches his homeland crumbling from the vantage point of Nazareth, Palestine. Each of them are intellectuals. They are not political nor activists yet are subjected to unrelenting abuse from the Lobby and its stooges within the British establishment.

I have immersed myself  in the study of the J-word. I realised a long time ago that as Israel defines itself as the Jewish State and enjoys the almost absolute support of world Jewry and its institutions, we need to ask what the J-word stands for. Instead of asking who or what are the Jews, I decided to examine what those who self-identify ‘as Jews’ mean by that term. In my books The Wandering Who and its sequel, Being in Time, I produced a study of the metaphysics of Jewishness. I examined different perspectives of Judeo-centrism. I attempted to untangle the concept of choseness. I have tried to understand what it is in Jewish culture that provokes animosity and causes Jewish history to be a tragic continuum.

In The Wandering Who I delved into the notion of Pre-Traumatic Stress Disorder (PRE TSD). In PRE TSD, stress results from  a phantasmic event, an imaginary episode set in the future; an event that has never taken place. Unlike PTSD (Post Traumatic Stress Disorder) in which stress comes as a direct reaction to an event that (may) have taken place in the past, with PRE-TSD, the trauma is caused by an imaginary scenario of destruction.

The fear of Corbyn is clearly an example of such a phantasy. The illusion is self- perpetuating as neither Corbyn nor his party did anything to contribute to its escalation. No one within the British Jewish community managed to stop this snowball of collective stress. And now the results of this are devastatingly clear.

A crack of mistrust has opened in British society between the Jews and their host nation. I would think that Jews who find this upsetting can easily identify the Jewish pressure groups, leaders and media outlets that led to this unnecessary development.

My guess is that reading my work rather than burning my books could have helped the Jewish community to introspect and prevent this development. Engaging with me rather than attempting to cancel my talks might have saved the Jewish institutions from repeating their most obvious historic mistakes.

I accept that blowing the whistle is a challenge. I understand that for most people, living in a state of denial is convenient, but I also know that truth unveils itself to us, often, unexpectedly. In the real world it is not us, the people, who seek the truth, instead it is actually the truth that haunts us wherever we are and against all odds.

My battle for truth and freedom involves some expensive legal and security services. I hope that you will consider committing to a monthly donation in whatever amount you can give. Regular contributions will enable me to avoid being pushed against a wall and to stay on top of the endless harassment by Zionist operators attempting to silence me and others.