[ Editor’s Note: I had been a bit mystified over these alleged “quiet” peace talks, as the continued Saudi air force bombings were an indication they were not going too well.

Fortunately, the bombing seems to have eased off. We have recently seen SA drones being shot down, plus a Cobra gunship where two unfortunate pilots learned the Houthis were able to shoot them down at high altitude.

I was reading this report below with my usual skepticism, until I got to the part where Saudi state media reported that flights are going to resume out of Sana’a, the capital, a major break in the blockade and a sure sign that a road map for ending hostilities is in play.

There is no news about the Houthis’ main port being opened, which is critical to solving the food and medicine shortages. Air flights will allow seriously ill Yemenis to get out to regional hospitals for care, which will begin healing the wounds of war.

Fighting is still going on between the Houthi and former Hadi regime forces. If the Saudis have left the Hadis hanging out to dry, the latter will have to give up and accept whatever deal the Saudis have with the Houthis. The Hadis are mostly funded by the Saudis, so they do not have freedom of action.

I suspect the Saudis want some kind of Balkanized, weakened, divided Yemen, where they will come back after the dust has settled down and buy with cash what they were not able to take on the battlefield.

One of the big questions will be is whether the Houthi government will be able to have an independent foreign policy, i.e., to continue being close to Iran. If that happens, the concession will rattle the US, as it wants the regional states to be cannon fodder whenever a conflict with Iran should emerge.

Yemen deserves a break and has earned it with blood and tears. Maybe the Saudis will get to learn that some day. I hear it builds character, and the Saudis surely need a good dose of that to break out of their dead-end, semi-gilded royal prison… Jim W. Dean ] 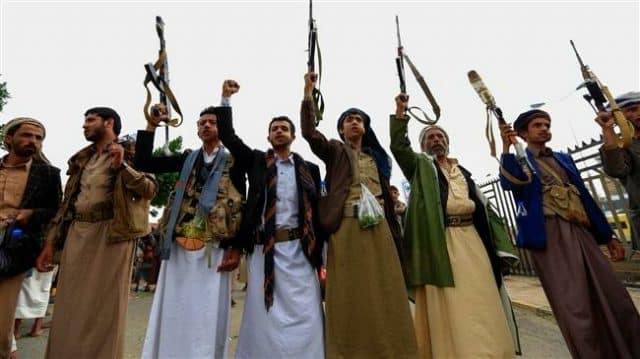 Yemenis loyal to former president Abd Rabbuh Mansour Hadi are deeply sidelined by Saudi Arabia’s direct talks with Houthis. According to London-based Middle East Eye (MEE) news portal, Riyadh does not discuss its existing engagement of the Houthis with the “weak” pro-Hadi regime.

“Saudi Arabia is trying to find an exit from the trap it fell into,” Mohammed Ali, a journalist and commentator from the southwestern city of Ta’izz, told MEE.

Riyadh has admitted having an “open channel” with the Yemeni movement to negotiate an end to the conflict. Last month, the Associated Press reported  that Saudi Arabia and the Houthis have been holding “indirect, behind-the scenes talks” mediated by by Oman.

The Houthis reportedly offered to stop launching attacks on Saudi targets if the kingdom ended its airstrikes in Yemen. They later unilaterally released hundreds of prisoners, while the Saudis freed 128 Yemenis on Thursday.

The Hadi regime is apparently incensed, thinking that the communication between Saudi Arabia and the Houthis is aimed at ending attacks on the kingdom.

On Tuesday, a statement carried on Saudi state media said the kingdom would ease restrictions on Yemeni airspace to allow flights out of the Yemeni capital Sana’a, which is administered by a coalition including the Houthis.

According to MEE, the agreement between Saudi Arabia and the Houthis and lifting blockade on Yemen was reached in Oman, but Hadi’s delegates were not involved in the negotiations.

Saudi Arabia made the concession after three of its border brigades were captured by Yemenis in August and the Houthis bombed oil facilities in September, the report said. Hadi’s deputy prime minister Abdulaziz Gubari warned Saudi Arabia last month not to sign any bilateral agreement with the Houthis.

Abdulghani Rageh, a pro-Hadi military leader in Ta’izz, said the talks between Saudi Arabia and the Houthis have sidelined the former Yemeni president.

“The Houthis are the winners of the talks,” he said, claiming that battles have calmed down on the Saudi borders but not on local fronts.

Mohammed Ali told MEE that Saudi Arabia prioritizes its safety and economy over all other issues. Hadi and his regime, he said, are “only helpless followers of Saudi Arabia” and Riyadh prefers to discuss any solution with the Houthis instead of its “weak” proxies.

Saudi Arabia launched its military aggression against Yemen in 2015 in an attempt to reinstate Hadi and eliminate the Houthis. With those objectives appearing more elusive than ever, the only way for Hadi seems to also engage the Houthis.

However, Hadi and his high-ranking associates live outside Yemen and “none of them care about Yemenis,” Ali said.

“I hope to see Yemenis inside Yemen holding talks with the Houthis and reaching reconciliation internally. Solutions will come from within Yemen, not from another country,” he added.