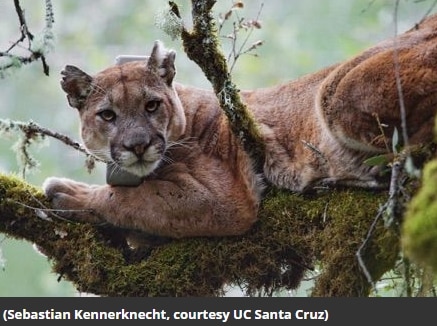 Health Editor’s Note: So researchers say that the levels of mercury that are found in the fog coming off of the Pacific are not toxic for humans, but may be harming the California pumas (mountain lions) who live along the coast and are thus subjected to living in fog some of the time.  Compared to those pumas who do not live in the fog areas, these fog affected mountain lions are being poisoned by mercury carried from the ocean, into the air in the form of fog, and then condensing  and falling down onto the vegetation and land within the fog regions along the coast. Higher levels of mercury are being found in coastal pumas.  Humans are also apex hunters, we also eat meat, and we also eat plants and most definitely live within areas of land touched by the fog. How would man escape obtaining higher levels of mercury if those levels are affecting another mammal who eats meat and eats critters who ingest plants?  Methylmercury is coming from the Pacific Ocean. How has man gotten the oceans so polluted that the normal process of fog development can now become a poison? What is the solution for getting rid of the mercury?  Can it be done?….Carol

As fog drifts over the coast of California, it may carry a noxious substance that is endangering one of the region’s keystone species. A new study in Scientific Reports has found elevated levels of mercury in pumas that roam through the Santa Cruz Mountains—and researchers suspect that marine fog is responsible for wafting the neurotoxin into the terrestrial food chain.

Mercury is a naturally occurring element that is released into the environment through both natural processes and human activities, like mining and coal-fired power plants. Once mercury is in the atmosphere, it can rain down into the ocean, where anaerobic bacteria convert it into methylmercury—“the most toxic form of mercury,” according to the University of California, Santa Cruz. At high enough concentrations, methylmercury can cause neurological and reproductive damage, among other negative effects.

Some of the methylmercury in the ocean rises to the surface of the water, where it is carried inland by fog. “Fog is a stabilizing medium for methylmercury,” explains Peter Weiss-Penzias, an environmental toxicologist at UC Santa Cruz and lead author of the new study.