[ Editor’s Note: Beijing had warned there would be a response for the US Congressional bill passed, stating it is fully on board the New Cold War train with China, as we are heading into an election year. The smell of American jingoism is in the air.

While China claims to have a lot of facts and evidence about US interference, it has hurt its own credibility by not releasing any of that during the worst of the Hong Kong rioting.

Why would China hold evidence back when that puts them in the same boat with the US government pundits who make charges day after day without showing any evidence either?

The best material I got hold of was the half-hour RT special that shredded the western media version of Hong Kong events. China should have done its own show to put this material out, but it is way behind on the media curve.

For over a decade, Russia and Iran have had geopolitical English platforms, which have been a river of information from their side of the looking glass. For some reason, China has stayed with the official statements without offering any background media to help bring the Western audience more up to date.

China seems to be locked in a time warp with its endless demands that the US should stop interfering in its affairs and “correct mistakes”.

Dear China, Don’t hold your breath on that. You are going to need to get your media game more up to speed to have any effect on US policy. You have been at this for years now. You need an English online media platform to fill Western audiences in with more details, as you are getting little traction using official channels… Jim W. Dean ] 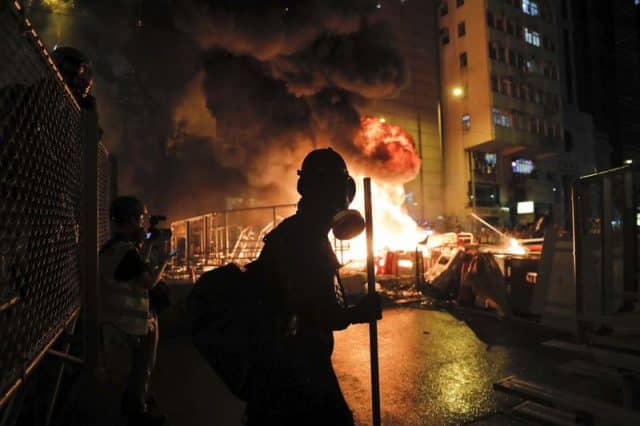 China has suspended the review of requests by American military ships to visit Hong Kong after the US Congress passed two bills in support of violent anti-government protests in the Chinese financial hub.

Addressing a news briefing on Monday, Chinese Foreign Ministry spokesman Hua Chunying said “in response to the unreasonable behavior of the US side, the Chinese government has decided to suspend reviewing the applications for US warships to go to Hong Kong for (rest and) recuperation as of today.”

Such naval visits are part of a rest-and-recreation tradition that dates back to the pre-1997 colonial era, which Beijing allowed to continue after return from British to Chinese rule.

She said Beijing would also impose sanctions on a number of US-based NGOs for acting “badly” and fueling the unrest in Hong Kong, including the National Endowment for Democracy, Human Rights Watch and Freedom House, among others.

These NGOs, she said, have a “great responsibility for the chaotic situation in Hong Kong,” which has been grappling with violent street demonstrations since June.

There was “already a large amount of facts and evidence that make it clear that these non-governmental organizations support anti-China” forces and “incite separatist activities for Hong Kong independence,” Hua said.

Public anger in Hong Kong initially erupted against a controversial extradition bill. The proposal was later shelved in the wake of criticisms, but anti-government rallies continue unabated, with rioters vandalizing public and private property and attacking security forces and government buildings.

Beijing blames the United States as well as Britain, the former colonial power in Hong Kong, as instigators of the violent protests, repeatedly calling on the outsiders to stop meddling in the affairs of China.

Defying Beijing’s calls, US President Donald Trump last week signed two bills passed in Congress, which back protests in Hong Kong and threaten mainland China with “human rights” sanctions over its handling of the rallies.

The bills infuriated China, which warned that it would take “firm counter-measures.”

At the news briefing, Hua further reaffirmed Beijing’s resolve to safeguard Hong Kong’s “prosperity and stability and our national sovereignty, security, development and interests,” stressing that necessary measures will be taken to that effect.

The Chinese official further renewed calls for the US administration to stop interfering in and commenting on China’s domestic affairs, stressing that Washington should “correct mistakes.”