Watch FFWN above—check out list of stories we covered HERE 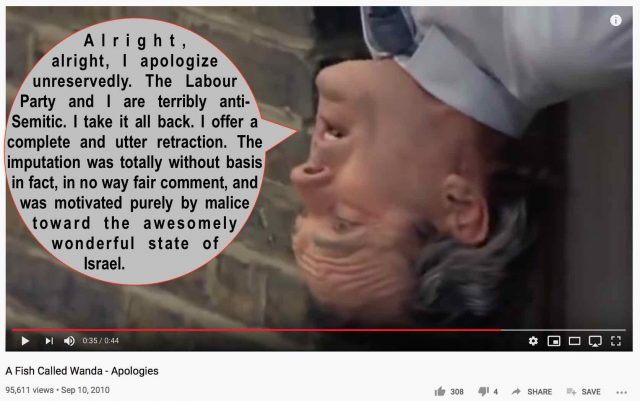 Will Jeremy Corbyn keep apologizing to the Zionist criminal syndicate? Each time he apologizes, they insist that it wasn’t good enough—he needs to grovel even more shamefully in humiliating self-abasement!

Personally I prefer to respond to the ADL in a slightly less obsequious manner:

Dear B’nai B’rith: Is it “anti-Semitic to point out that Jewish control over the internet is all pervasive”?

In this week’s episode of False Flag Weekly News, Helen Buyniski explains that the verb “to corbyn oneself” means to apologize to a bully in such a way as to draw upon oneself even more bullying.

Helen Thomas corbyned herself a few times. Ilhan Omar too. The one politician who never, ever corbyned herself is my friend and hero Cynthia McKinney, who may not be president, rich, or even still in Congress, but who still has her self-respect…and the respect of everybody who’s paying attention.

When will guys like Corbyn learn to stop apologizing and go on the offensive? If it works for a moronic sleazebag like Donald Trump, it should work even better for people with principles and three digit IQs.