[ Editor’s Note: This news comes as no surprise, as our yo-yo president has the business community up a tree on how to plan for the future, where the only long term planning that Trumps seems focused on is getting re-elected.

I have been writing on the risk of a worldwide recession, not so much due to the slow slide of spending and exports, but with all the international aggression by the US now in some kind of silly game of “if we hurt them more than we do ourselves we still come out the winner.”

We already had a major close call in the Persian Gulf, with the big US drone shot down and Trump reversing the US retaliatory strike on Iran’s missile defense structure. The word was to avoid 150 Iranian casualties estimated.

But yours truly suspects that US Intel told Trump that Iran’s response to a US attack would be a full-scale attack on all US bases in the region, and that it could not promise that we would not take major losses.

Trump would then be caught in a position of explaining why all that damage was incurred over the loss of one drone, which is widely believed to have been darting in and out of Iranian airspace to get it to shoot at the intruder.

I expect a back-story here that it was some kind of electronic warfare live test to blind the Iranian missile that did not turn out too well.

That is mere conjecture on my part, as I have no source for it other than during the Cold War, the US was doing that frequently to collect information on Soviet radar responses to US incursions, to find holes, or at what range they would light up and anti-radar missiles could be fired at them, etc.

And then we had the ARAMCO attack, where everyone learned that the US was not going to attack Iran over the Saudis losing half their oil production for about a month, which we can see now was not an economic disaster. After a delay of a month or so, the Saudis even went forward with the ARAMCO stock offering.

Trump feared a misstep in a war that he would be blamed for, which would hurt his reelection prospects. And then I suspect his NeoCon economic advisers are telling him the trade wars are hurting our competitors more than us and they will cave in first.

Trump’s interference in Hong Kong as part of his multi-phased attack on China might trigger China’s hunkering down, thinking a recession could help get rid of Trump for a second term, and worth the trade-war cost, as opposed to risking four more years with him… Jim W. Dean ] 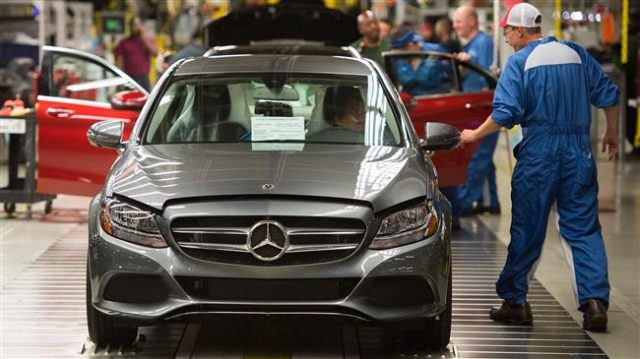 US manufacturing output deteriorated for the fourth consecutive month, damaged by trade conflicts and a weakening global economy.

The Institute for Supply Management, an association of purchasing managers, said Monday that its manufacturing index dipped to 48.1 last month from 48.3 in October. Anything below 50 signals contraction.

US factories have been on a losing streak since August. New orders, production and hiring all dropped for the fourth straight month. Export orders fell in November after rising in October.

Continued contraction in manufacturing could put the Federal Reserve in a difficult policy position. The US central bank in October cut interest rates for the third time this year and signaled a pause in the easing cycle that started in July when it reduced borrowing costs for the first time since 2008.

US President Donald Trump has imposed import taxes on foreign steel, aluminum and thousands of goods from China. Businesses have been reluctant to invest until they have a clearer idea whether, when and how the trade conflicts will end.

Trump on Monday restored tariffs on steel and aluminum imports from Brazil and Argentina. Economists say without a complete trade deal, manufacturing is unlikely to rebound much and the sector could remain under pressure.

In a separate report on Monday, the US Commerce Department said construction spending dropped 0.8% as investment in private projects tumbled to its lowest level in three years. Data for September was revised to show construction outlays declining 0.3% instead of rising 0.5% as previously reported.

Spending on private nonresidential structures, which includes manufacturing and power plants, plunged 1.2% in October to the lowest level since January 2018.