[ Editor’s note: Today brought a new twist in the Iran riots, where official sources are claiming that early casualty figures were hyped by hostile parties to make the violence appear to be greater than it was to boost the perception of the scale of the opposition.

This report oddly admits that Iran does not even have a complete casualty count. We had reports that many of those arrested were released after a few days, after background checks showed no third-party, interventionist connections.

The numbers can be confusing when they are compiled for various categories, like the “over 100 ring leaders arrested” news two days ago. The public cannot remember who was arrested during the riots, versus those picked up after their various cells were exposed and rounded up, nor do they really care.

The main story was that the instigators of violence infiltrated and used the peaceful protests as cover to make their violence look more widespread with larger crowds supporting it – an old Intel psyops con.

It would be a good time for Iran to move on, as this story is over in terms of international interest; and others need more focus, such as who is behind the riots in Iraq. You notice that Iran has not weighed in, keeping any Intel that it has close to the vest.

Iraq has done the same, pointing the finger only in a general direction (the Sunnis), but nothing on specific cells broken up that were linked to a particular country like Saudi Arabia.

Iraq cannot bark too loudly if the US and proxies are involved in riots there, as the US is pumping a billion dollars per year into Iraq and giving it sanctions waivers on its oil exports… Jim W. Dean ] 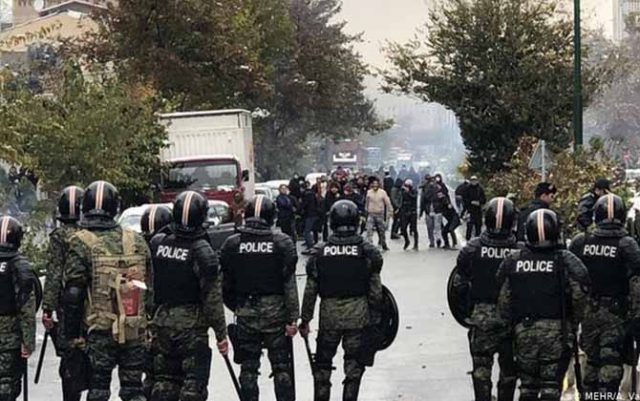 The Iranian Judiciary says around 300 individuals currently remain in custody over their suspected involvement in the deadly riots that recently hit Tehran, and that their fate will soon be decided.

Gholam-Hossein Esmaili, the Judiciary’s spokesman, said Tuesday that those detainees who are found to have been among “saboteurs” will face imminent prosecution, while the rest will be released as soon as possible.

The Iranian government raised gasoline prices on November 15 in order to moderate the national consumption rate, which stands at 110 million liters per day, 40 million liters above the maximum daily domestic requirement.

The move prompted protests in a number of cities which were largely peaceful, but which turned violent when riotous elements took advantage of the circumstances to destroy public property and set banks and gas stations ablaze.

Authorities say some also used firearms and other weapons to kill and injure protesters. A number of people and security forces lost their lives during the violence. There is no official tally on the number of casualties yet.

The Judiciary said last month that a number of the rioters were tied to the notorious US-backed Mujahedin-e Khalq Organization (MKO) terror group, royalists as well as separatists, who were nabbed in the country’s border provinces, besides members of organized groups trained towards staging acts of sabotage.

During his Tuesday’s remarks, Esmaili dismissed the unofficial casualty count provided by certain sources as inaccurate.

“The numbers and figures that are being provided by hostile groups are utter fabrication and the actual figures are fewer than what these sources claim,” he said.

“They have released figures as well as certain names… The purported casualty count is not but a fabrication,” he said, in remarks aired on state television, adding that sources with hostile intentions have provided the names of people who lost their lives in circumstances unrelated to the recent violence, and of people who are even alive.

The judiciary spokesman further hailed the Iranian people for participating in pro-establishment rallies in condemnation of the recent riots and “separating their ranks from rioters.”

A week after the violent riots, huge crowds of Iranians across the country took park in rallies to show their support for the government and express outrage at anarchist measures meant to inflict human and material losses during the riots.

Meanwhile, Iran’s Intelligence Ministry announced on Tuesday that security forces had disbanded a counter-revolution network that had been plotting to carry out acts of violence in universities across Tehran and other cities.

The ministry said in a statement that its agents had identified and arrested key members of the network, who were planning to provoke unrest and disrupt the events marking Iran’s National Student Day later this week.

The occasion marks the anniversary of the murder of three students of University of Tehran on December 7, 1953 by Iranian police in the Pahlavi era.

Every year, national demonstrations are organized to honor the occasion.