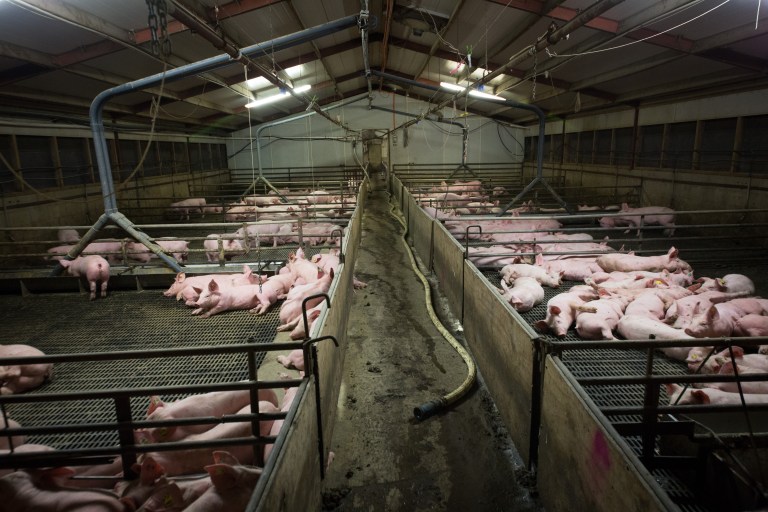 Mike’s Notes: The rise in factory farms in recent years has been a two edged sword for the people in this country. They are able to produce large, relatively disease free meat for us at reasonable prices. This is good for the consumer.

The downside to this is that this efficiency comes at a great cost to our environment and to our possible health. These factory farms create unbelievable amounts of animal waste; more than can be safely handled.

These farms also overuse antibiotics which leads to bacteria mutating to become resistant to known antibiotics. These resistant bacteria are now infecting people at an alarming rate. Big Pharma is not spending a lot of research dollars on developing better antibiotics as they are the type of drugs that are used for a short time, do their job, and are discontinued. There is much more profit in creating drugs that control conditions and need to be taken indefinitely. Also a lot of research goes into “lifestyle drugs.” These are drugs and other treatments that are not necessary for health but provide a better appearance or some other lifestyle benefit.

In 2014, the Review on Antimicrobial Resistance, commissioned by the U.K. government and Wellcome Trust, estimated that 700,000 people around the world die each year due to drug-resistant infections. A follow-up report two years later showed no change in this estimate of casualties. Without action, that number could grow to 10 million per year by 2050. A leading cause of antibiotic resistance? The misuse and overuse of antibiotics on factory farms.

Flourishing antibiotic resistance is just one of the many public health crises produced by factory farming. Other problems include foodborne illness, flu epidemics, the fallout from poor air and water quality, and chronic disease. All of it can be traced to the current industrial approach to raising animals for food, which puts a premium on “high stocking density,” wherein productivity is measured by how many animals are crammed into a feeding facility.

Oversight for the way factory farms operate and manage waste is minimal at best. No federal agency collects consistent and reliable information on the number, size and location of large-scale agricultural operations, nor the pollution they’re emitting. There are also no federal laws governing the conditions in which farm animals are raised, and most state anti-cruelty laws do not apply to farm animals.

For example, Texas, Iowa and Nebraska have excluded livestock from their animal cruelty statute and instead created specific legislation aimed at farm animal abuse that makes accepted or customary husbandry practices the animal welfare standard.

In North Carolina, any person or organization can file a lawsuit if they suspect animal cruelty, even if that person does not have “possessory or ownership rights in an animal.” In this way, the state has “a civil remedy” for farm animal cruelty.

Antibiotic resistance: The problem: In 2017, nearly 11 million kilograms of antibiotics—including 5.6 million kilograms of medically important antibiotics—were sold in the U.S. for factory-farmed animals. Factory farms use antibiotics to make livestock grow faster and control the spread of disease in cramped and unhealthy living conditions. While antibiotics do kill some bacteria in animals, resistant bacteria can, and often do, survive and multiply, contaminating meat and animal products during slaughter and processing.

What it means for you: People can be exposed to antibiotic-resistant bacteria by handling or eating contaminated animal products, coming into contact with contaminated water or touching farm animals, which of course makes a farmworker’s job especially hazardous. Even if you don’t eat much meat or dairy, you’re vulnerable: Resistant pathogens can enter water streams through animal manure and contaminate irrigated produce.

Developments: The European Union has been much more aggressive than the U.S. in regulating antibiotic use on factory farms, banning the use of all antibiotics for growth promotion in 2006. But the U.S. is making some progress, too. Under new rules issued by the Food and Drug Administration (FDA), which went into effect in January 2017, antibiotics that are important for human medicine can no longer be used for growth promotion or feed efficiency in cows, pigs, chickens, turkeys and other animals raised for food.

Additionally, 95 percent of medically important antibiotics used in animal water and feed for therapeutic purposes were reclassified so they can no longer be purchased over the counter, and a veterinarian would have to sign off for their use in animals. As a result, domestic sales and distribution of medically important antimicrobials approved for use in factory farmed animals decreased by 43 percent from 2015 (the year of peak sales) through 2017, reports the FDA.

“The FDA should implement ambitious reduction targets for antibiotic use in the meat industry, and ensure that these medicines are used to treat sick animals or control a verified disease outbreak, not for routine disease prevention,” Wellington said in a statement, according to the Center for Infectious Disease Research and Policy.

National Resources Defense Council Senior Attorney Avinash Kar agrees. “Far more antibiotics important to humans still go to cows and pigs—usually when they’re not sick—than to people, putting the health of every single one of us in jeopardy.”
Water and pollution

The problem: Livestock in this country produce between 3 and 20 times more waste than people in the U.S. produce, according to a 2005 report issued by the Environmental Protection Agency (EPA). That’s as much as 1.2-1.37 billion tons of manure a year. Some estimates are even higher.
Manure can contain “pathogens such as E. coli, growth hormones, antibiotics, chemicals used as additives to the manure or to clean equipment, animal blood, silage leachate from corn feed, or copper sulfate used in footbaths for cows,” according to a 2010 report by the National Association of Local Boards of Health. Though sewage treatment plants are required for human waste, no such treatment facility exists for livestock waste.

Since this amount far exceeds what can be used as fertilizer, animal waste from factory farms typically enters massive, open-air waste lagoons, which spread airborne pathogens to people who live nearby. If animal waste is applied as fertilizer and exceeds the soil’s capacity for absorption, or if there is a leak or break in the manure storage or containment unit, the animal waste runs off into oceans, lakes, rivers, streams and groundwater.
Extreme weather increases the possibility of such breaks. Hurricane Florence, for example, flooded at least 50 hog lagoons when it struck the Carolinas last year, and satellite photos captured the damage.

Whether or not the manure is contained or spread as fertilizer, it can release many different types of harmful gases, including ammonia and hydrogen sulfide, as well as particulate matter comprised of fecal matter, feed materials, pollen, bacteria, fungi, skin cells and silicates, into the air.
What it means for you: Pathogens can cause diarrhea and severe illness or even death for those with weakened immune systems, and nitrates in drinking water have been connected to neural tube defects and limb deficiencies in newborns (among other things), as well as miscarriages and poor general health. For infants, it can mean blue baby syndrome and even death.

Gases like ammonia and hydrogen sulfide can cause dizziness, eye irritation, respiratory illness, nausea, sore throats, seizures, comas and death. Particulate matter in the air can lead to chronic bronchitis, chronic respiratory symptoms, declines in lung function and organic dust toxic syndrome. The Centers for Disease Control and Prevention (CDC) reported that children raised in communities near factory farms are more likely to develop asthma or bronchitis, and that people who live near factory farms may experience mental health deterioration and increased sensitization to smells.

Developments: It is difficult to hold factory farms accountable for polluting surrounding air and water, largely for political reasons. The GOP-controlled Congress and the Trump administration excused big livestock farms from reporting air emissions, for instance, following a decade-long push for special treatment by the livestock industry.

The exemption indicates “further denial of the impact that these [emissions] are having, whether it’s on climate or whether it’s on public health,” says Carrie Apfel, an attorney for Earthjustice. In a 2017 report from the EPA’s Office of the Inspector General, the agency admitted it has not found a good way to track emissions from factory farms and know whether the farms are complying with the Clean Air Act.

No federal agency even has reliable information on the number and locations of factory farms, which of course makes accountability even harder to establish.