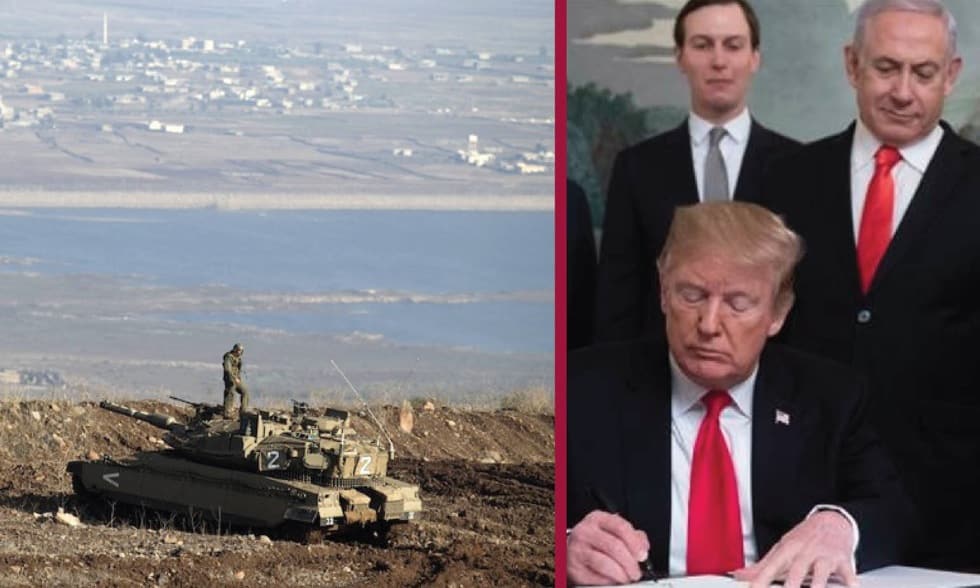 Israel must leave the Golan. The UN General Assembly reiterated it in recent days, which gave a great slap to US President Donald Trump who on several occasions declared legal the occupation of the territories taken from the Tel Aviv army to Syria.

The news did not have prominence in the western media that instead in June last had celebrated with enthusiasm the laying of the foundation stone of the city Trump Heights, so named by the Israeli premier Benjamin Netanyahu after the public recognition by the White House of the territories occupied by Israel in the the Golan plateau.

The condemnation of the Israeli occupation was made by one of the many UN resolutions which has now become an organization totally devoid of power and international significance after veto rights in the Security Council (US, Russia and China) have demonstrated on several occasions the blocking of any concrete action for the restoration of international law in countries at the center of civil or international wars such as Syria.

To highlight the news is only Russia Today after another Russian media, Sputnik News, recently highlighted the protest of around 5 thousands Israelis took to the streets last Saturday in Tel Aviv to demand the resignation of interim Prime Minister Netanyahu after his official indictment and the failure of two elections to allow the Knesset, the Israeli parliament, to form a government and choose a new prime minister.

«The UN General Assembly has adopted a resolution demanding that Israel vacate the Golan Heights – Syrian territory it captured in 1967 and has occupied since – arguing its presence in the disputed region is an obstacle to peace – reads on RT – Passed in a 91 vote with 9 against and 65 abstentions on Tuesday, the resolution called on Israel to abandon the Golan after over 50 years of occupation, insisting that nations may not acquire territory by conquest, a core principle of international law». 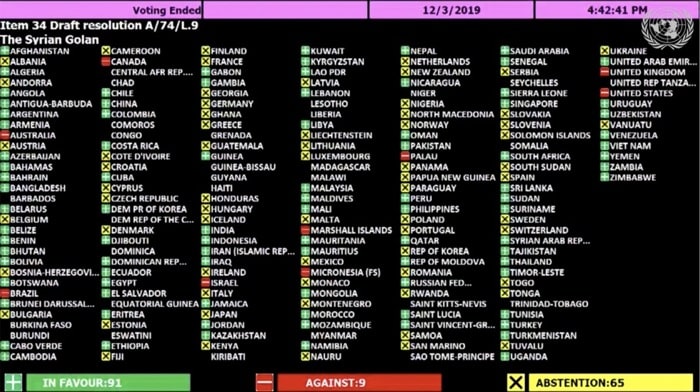 «The continued occupation of the Syrian Golan and its de facto annexation constitute a stumbling block in the way of achieving a just, comprehensive and lasting peace in the region» the resolution said, demanding that «Israel withdraw from all the occupied Syrian Golan».

The rebuke comes months after US President Donald Trump recognized Israeli sovereignty over the Golan, reversing longstanding American policy and contradicting a number of previous UN resolutions condemning Israel’s presence in the territory. In another more recent about-face, Washington also rubberstamped Israeli settlements in the occupied West Bank, which have also been the subject of past UN measures.

In addition to the Golan resolution, the General Assembly passed four other measures related to Israel on Tuesday, one urging «respect for, and the preservation of «occupied Palestinian lands – including the West Bank and East Jerusalem – and reaffirming the «illegality of Israeli settlement activities».

The other resolutions recognized the work of UN departments devoted to Palestine issues, and requested the continuation of a “special program” to disseminate information on Palestine and related UN decisions. The United States voted against all five measures in tandem with Tel Aviv.

Unlike resolutions passed in the UN Security Council, which are legally-binding, the General Assembly has no power to enforce its measures, making Tuesday’s adoptions largely symbolic. But they may nevertheless underscore growing international opposition to Israel’s decades-long occupation and settlement project

read more THE SYRIAN WAR PLANNED BY CIA SINCE 1983

During its war with Egypt in 1967, Israel captured Sinai and Gaza – both held by Egypt at the time – annexed the West Bank from Jordan, seized the Golan Heights from Syria, and occupied East Jerusalem, tripling the country’s size in a matter of days. To date, Israel has only vested control of Sinai and continues to occupy the other territories.

A few days ago around 5 thousand protester organised a rally in Tel Aviv for demanding the Netanyahu resignation after the news about his crimes blaming and many shady international affairs.

«Israel’s Attorney General has indicted PM Benjamin Netanyahu on corruption charges after months of uncertainty over whether Netanyahu would be able to retain his leadership of the country. He is charged with bribery and fraud – reported Russia Today – Netanyahu faces charges of breach of trust and fraud stemming from three cases in which he allegedly made illicit deals – either with supporters or with local businesses – in exchange for gifts or cash».

read more THE WEAPON’S AFFAIRS BETWEEN ZIONIST AND NEONAZI

AG Avichai Mandelblit announced the indictment, which has been hanging over Netanyahu for months, in a statement on Thursday.

The most severe case involves charges of altering telecom regulations in favor of telecom company Bezeq, whose owner, Shaul Elovitch, also ran news site Walla News. Flush with a $500 million windfall, Elovitch would allegedly press his editors to make coverage more favorable to the Netanyahus. That case involves a bribery charge on top of breach of trust and fraud, and Elovitch and his wife are also facing bribery charges.