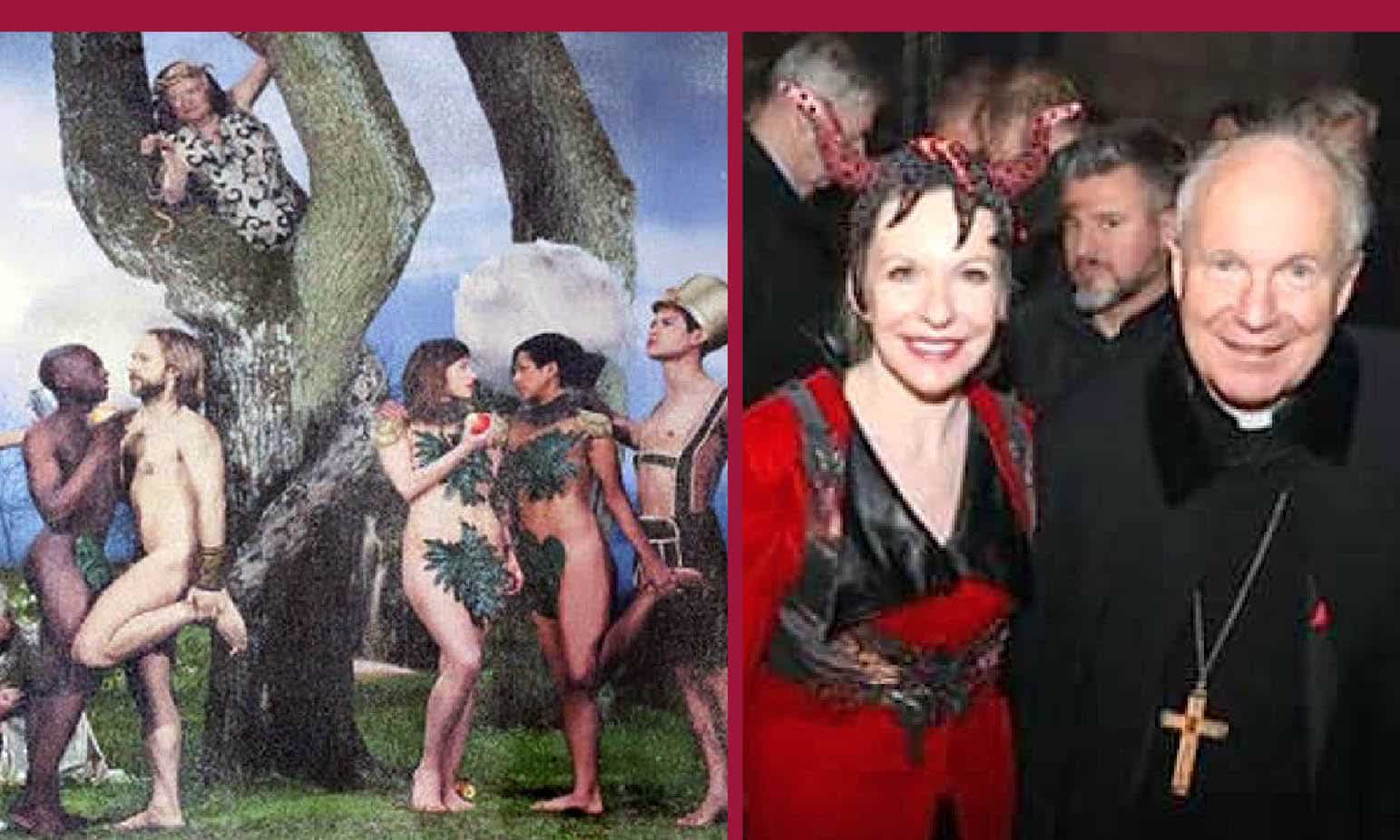 Devils, bare-chested dancers with horns and latex overalls with flaming groin, buckles with skulls, drag queens, feathers, fishnet stockings, red candles in a gloomy dark atmosphere, electronic music and stealing smoke like infernal flames. And all around the desecrated Holiness: crucifixes, priestly vestments and lecterns with the Bible.

Not many words are needed to comment on the shame that the famous bearded drag queen Conchita Wurst staged at St. Stephen’s Cathedral in Vienna with the blessing of Cardinal Christoph Schönborn. “The devil is in the details” recognizes an ancient adage.

And it is in one of these clearly visible in the posed photographs of the protagonists of the show of LGBT ideology on the occasion of the World Day against AIDS of last November 30 that a reference is not even too subliminal to the satanic devotion, already dear to many exponents Masons, like the American Albert Pike. that even at a recent conference in Trento (Italy) they mocked Pope Leo XIII for his excommunication of Freemasonry.

The ghostly child held by the singer in the Conchita Wurst’s show recalls the famous sculpture Pity by Michelangelo Buonarroti but also a famous scene from Mel Gibson’s movie The Passion of Christ: the one in which the demon played by Rosalinda Celentano passes with the fruit of human sins while Jesus is flogged in blood to the column. Is it just a mere coincidence?

How did the horns on the head of the dancers who turned a Viennese church into a Dante’s hell through a gloomy stage set illuminated by bright red candles?

The parody of the painting Adam and Eve (1528) by the German painter Lucas Cranach  is certainly not a coincidence: it was elaborated in a “gay-friendly” setting by the lesbian photographer and artist Elisabeth Ohlson Wallin.

The work, in which the Earthly Paradise is populated by the gestures of seduction between homosexual couples and the presence of blatantly transgender figures, was created in 2012 to be exhibited in Skara Cathedral on the occasion of the first gay marriage legitimized by the Lutheran Church in Sweden since 2009.

But, as both GloriaTv and Russia Today show, it was considered too provocative and was not accepted in the temple of the Protestant followers of Martin Luther in Skara. However, 7 years later, the LGBT activist Wallin proposed her to the St. Paul church, in the other Swedish city of Malmo that welcomed it and raised her as an altarpiece in the bewilderment of many faithfuls.

«St. Paul’s Church in Malmo accepted the painting called “Paradise” as its new altarpiece and unveiled it on Sunday, the first day of Advent. Helena Myrstener, the pastor, said that “history was written” in the hanging of the “LGBT altarpiece” as she tweeted a photo of the painting » reports Russia Today. A double disfigurement considering that the patron saint Paul was one of the main apostles to condemn sodomy in the first letter to the Corinthians.

The revisitation of Eden was inspired by one of the works of Renaissance master Lucas Cranach, one of the first interpreters of the Lutheran reform in art, as is clearly visible from the winged serpent that distinguishes the Adam and Eve table preserved in the Florence’s Uffizi Gallery.

«The artist/activist said she wanted to show that, since the beginning of time, the place for gay people was in paradise rather than hell – adds RT – The modern interpretation interestingly seems more prudish in terms of nudity than the 16th century originals as both “lesbian Eves” have their breasts covered by leaves rather than concealing only their genitals, as is traditional».

According to Russia Today this happened because the Swedish painter would have an ambiguous and problematic reference to nudity. The Russian network recalls that its most famous photographic exhibition – the Ecce Homo (Here’s Man) inspired by the 2012 Bible in Belgrade – presented an image depicting the baptism of Jesus with the model representing Christ who has his penis completely exposed.

«The politization has gone too far» one member commented on the news as she announced leaving the Church. Another one said that while there were plenty of enlightened priests in the Church of Sweden, radicals from a “PC-pack” have turned it into their own arena.

A sentiment shared by many Catholic believers after the obscure LGBT show in the Cathedral of Vienna, legitimized by Cardinal Christoph Schönborn that already on 30 November 2018 he enjoyed the “gay-friendly” performances in the front row, alongside trangenders and homosexuals.

In the Temple of Jerusalem the merchants of coins and sacrificial animals traded and they were driven out by Jesus Christ, now in those of Christianity rampant the traders of an ideology historically condemned by the Bible in both the Old and the New Testament. These people must be respected as human persons but should not be celebrated even in church as champions of the sodomite and transgender culture …