by Jim W. Dean, VT Editor, …with New Eastern Outlook, Moscow …and the Institute of Oriental Studies of the Russian Academy of Sciences, a research institution for the study of the countries and cultures of Asia and North Africa.

[ Editor’s Note: Western media has been completely in the bag in terms of doing everything it can to present Russia in a distorted fashion. Decades ago, the West correctly accused Pravda of parroting the Communist Party line, which it did.

But western media refuses to acknowledge that a strong case could be made that it has figuratively reversed places with the old Pravda.

Due to its “sensitivity” to Israeli concerns and western intelligence agencies, it would not be unreasonable for anyone to wonder if the Intel orgs have offices inside these platforms to provide “advisory assistance”.

When I ran into Germany’s 13-year Brandenburg Airport saga story, it reminded me how the Atlanta airport extension went on forever, as they had to add extra runways on the other side of the major I-85 highway. It was a contractor’s dream come true.

Contrast these boondoggles with Russia’s efforts to recover from the looting done by Western Intel agencies during the West’s attempt to ensconce the oligarchs as surrogate rulers and to asset strip Russia forever. Putin and his Intel team literally saved Russia, and that is why he is hated, as are all who will not be subjugated, by the looters.

While Russia has a stressed economy, as do so many others, when Russians travel by air they certainly see nothing to suggest they live in a backward country, something Western propaganda still tries to imprint upon them.

While Russia continues to increase its gold holdings (along with China) for a potential international financial collapse, the US seems to have gotten comfortable with trillion dollar deficits to keep the stock marker high and the day of reckoning to be dealt with by the millennials… Jim W. Dean ] 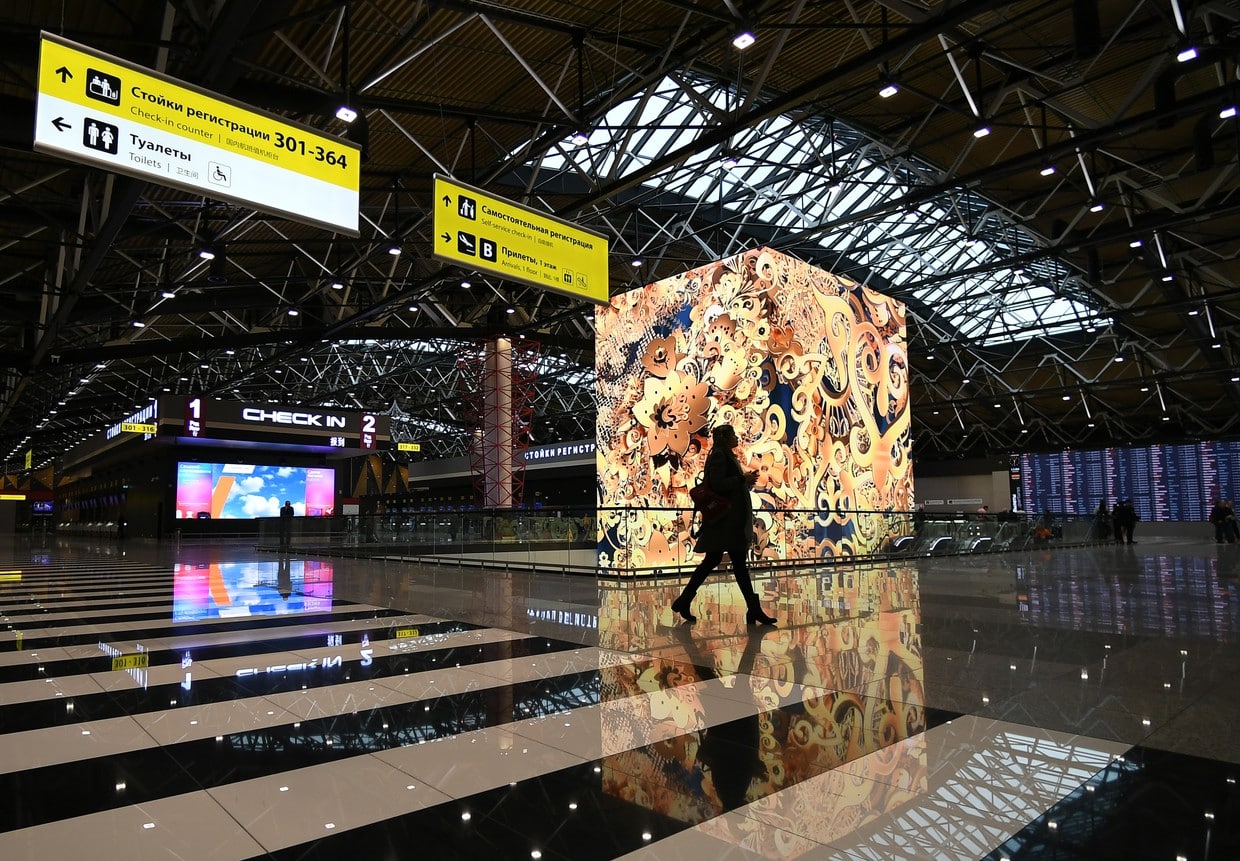 More recently we had the cruise missile and drone attack on the Saudi ARAMCO, where on day three, Trump said the Saudis would have to decide what they were going to do, as they would have to pay for it.

That instilled more faith in all of us war watchers that the US military commands were not a coiled spring waiting to be launched at the slightest opportunity to get a war started.

We had the news today in the US of the fourth month decline in manufacturing output according to the Institute for Supply Management. The US Department of Commerce also reported that construction spending dropped 0.8%

The US trade wars, despite having some validity in correcting systemic trade imbalances, have been written about endlessly as the major culprit of declining world GNP. There is another layer to the story that contrasts with the limited influence countries can have on their exports when hit with major international sanctions.

For those targeted countries with mature and well-diversified economies, having complete control over domestic development becomes a life preserver in terms of cushioning economic pain inflicted by outside actors. Domestic investment can be a jobs and GNP life preserver to last you until you are on firm economic ground again.

Russia builds its way to the future

In anticipation of a period of international trade war, especially after the Western and NATO coup in Ukraine and the ensuing US and EU sanctions upon Moscow, Putin had earlier begun major infrastructure projects to protect Russia’s huge investment in human capital – its highly educated and trained workforce.

When the Crimean sanctions came, he had a domestic expansion base already started that he could continue to build upon. One example was the major energy resource drilling and shipping development via the northern route.

Transportation improvements were early on the list, which involves bridge and often tunnel building, the airports, modern sea ports and the expansion of energy pipelines for long term national and economic security, where protecting one’s industrial base lifeblood is critical.

I have already written on NEO about the final permitting of the last leg of the Nordstream2 project, an underwater trade bridge to Russia’s closest EU trade partner, Germany, who viewed a guaranteed and low cost supply of natural gas to fuel its economy as a top priority. This was proved by Merkel’s stiff opposition to US pressure to kill the deal.

Energy pipelines are the internal arteries of economic security

The Nordstream2 story is still in progress, as the US Congress has mounted one more sanctions attempt against the Nordstream partners by attaching it to a Defense appropriations bill due to pass in December. Democrats are onboard this effort as much as the Republicans, so voters have no political options when it comes to muzzling the “sanctions gangsters,” as they are being called in some circles now.

We have a year-end triple play on pipeline news, with Putin and China’s Chairman Xi symbolically turning on the Siberian (Sila Sibri) pipeline this week, beginning a 30-year flow of $400 billion in gas to China. This was followed by the anticipated news that Russia and China have begun negotiations for a “Power of Siberia-2” new gas route along the Russian-Chinese border from western Siberia to Novosibirsk.

This pipeline route appears to be the future energy source for the overland Silk Road city development that is anticipated, with supply pipelines extending south. The remaining question will be, where is all the needed water going to come from to help China spread some of its huge population out into these new areas?

President Erdogan has announced that the 570-mile, twin Turkstream Gas Pipeline will be launched with Putin in Istanbul on January 8th. The pipeline will supply Turkey with one leg, with the other heading to southern Europe to provide energy security for gas supplies if Ukraine continues its goal to extort high gas transit fees from Russia.

Because Russia is a vast country, road travel is too slow for modern business to invest long term if it cannot move people, services and products around efficiently over long distances. A solid infrastructure of airport facilities is a necessity.

I was surprised to see the architectural investment put into the new airport expansion. These were not quickly thrown together projects on tight budgets, but well-coordinated and designed ones, completed in some cases in as little as two years, like the “Crimea Wave” terminal in Simeropol. Sochi International opened in time for the 2014 Winter Olympics as a showcase for Russia’s emerging economy.

Moscow’s Sheremetyevo International Airport added three new terminals and is now ranked among the top ten world air hubs by the UK-based AirHelp’s rating service. In 2018, its terminal B got Skytrax top rating. The new terminal of Saint Petersburg’s Pulkovo Airport is handling 20 million passengers per year to service the tourist bonanza for its heritage sites.

All this was done while the unfortunate Germans were struggling to complete the Brandenburg upgrade at huge cost overruns. Look around in North America or Europe for something similar in airport construction and you will find nothing to compare.

And yet because western mass media hardly ever writes on Russian development, people have no idea this has happened in Russia while it was under stress, but always kept its eye on needed domestic projects to kept the heart of the domestic economy pumping.

Russia’s Silk Road contribution is the next major project

I will wrap up today with just one road project, Russia’s highway leg for the Silk Road effort, the 2000-kilometer Meridian Highway that would run from the Orenburg region on the Kazakh border via the Minsk-Moscow junction that runs between the two capitals.

It is structured to be free for passenger traffic, but financing itself partly via trucking tolls due to the shorter route between shipping hubs in western China and central Europe. The main construction funding is what we would describe as “still in the bush,” as is much of the Silk Road construction.

Some type of shared funding will have to be arranged, and as a result, we see another reason for the US’ aggressive sanctions policy, where it can threaten any major private contractor getting involved in such a project to be put under US sanctions for “threatening the national security” of the US, something whose definition seems to expand by the month.

With Russia and China already under sanctions and having constructed internal payment systems and joint banking, etc., they are developing workarounds that are birthing an entirely new and buffered economic model for joint development.

The irony in much of this is that the US’ hardball trade offensive is actually manufacturing its own long term defeat, as business structures are being built that can operate independently of US commerce. Someday Americans will look back on America’s self-inflicted trade problems and realize that the Attila-the-Hun style boomeranged.

But who knows, maybe someday China and Russia will offer an undersea tunnel to connect with Alaska when political attitudes have changed. If you think that is crazy, then I would ask you, who would have expected China to have initiated a New Silk Road project? Not me, not in my lifetime. I would have lost that bet.