[ Editor’s Note: Yesterday was a busy news day so this story did not get out until close to midnight here. The Normandy Four has joined the continued growing list of fake “international dialogs” where the goal for one side was really not to conclude an agreement, but to run the clock out while one side built up an advantage to gain a “fait accompli” situation on the ground, classic Cold War stuff.

For Ukraine the US and NATO, who backed the violent Kiev coup, they wanted to build up Ukraine’s military forces, as usual out of the pockets of American chump taxpayer debt funding without a single protest nationwide here that I can think of.

After the US come France and Germany, who were the fake western guarantors of the Minsk agreement, but never bothered to have a meeting over the past two years simply because Ukraine did not want to abide by the agreement which was just fine with the US, France and Germany.

The key part of the story below is that Zelensky managed to squeak through walking the line of showing that he could get some movement toward normalizing the contact line in Donbass.

The main issue was contact line civilian traffic as families are on both sides with great difficulty trying to have any normal contact with relatives. Kiev made sure it took an hour to get through the border.

But the main unresolved issue kicked down the road is who is going to control the Donbass border with Russia. The Ukrainian Neo-Nazi faction of course want the Kiev government to have the Donbass region “surrounded”, which Putin will never agree to.

Zelensky has enough Parliament political power to do what he wants, but standing up to US and NATO power is his problem, as they want the Donbass back door to Russia closed.

Why? Let’s say that if the US and NATO want to put medium range missiles in Ukraine for their first strike ability, Moscow might want to respond by driving their own systems over the border into Donbass, which the West would describe as “unfair”.

In a future war Russia would have to put forces in Donbass fast to be able to take over eastern Ukraine and protect the Crimea northern front where its main Black Sea naval base is. The US and NATO know this … Jim W. Dean ] 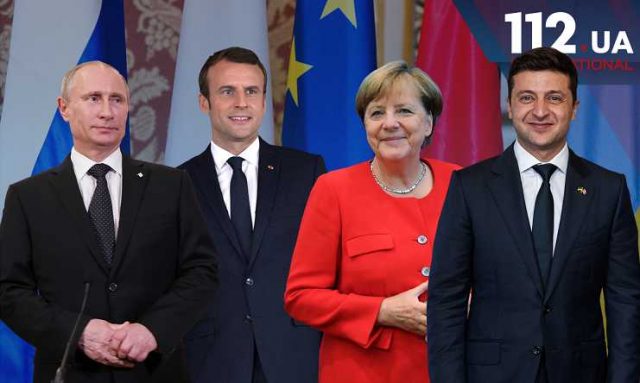 The leaders of France, Germany, Russia and Ukraine have agreed to implement “ceasefire support measures” for eastern Ukraine and “stabilize” the region by the end of the year. The four leaders held a joint media conference in Paris after the so-called Normandy Format negotiations on the transition to peace in eastern Ukraine.
–

Prior to the news conference, the leaders said in a joint communique that they agreed to “immediate measures to stabilize the situation in the conflict area in east Ukraine.” Previous attempts by the ‘Normandy Four’ group to simmer down the conflict have achieved mixed results at best.

Among these new additions are the release of prisoners on each side by the end of the year, the creation of three new disengagement areas and the creation of new crossing points, allowing civilians to cross the control line separating Donetsk and Lugansk from the rest of Ukraine.

“We need to make sure there are no more hour-long queues, so the thousands of ordinary people who live in this area can easily pass,” Russian President Vladimir Putin told reporters. “Let’s not forget about ordinary people who reside here. All of our arrangements need to improve their lives, and not sometime in the future, but now.”

The group also agreed to implement the ‘Steinmeier Formula’ into Ukrainian legislation. Named for Germany’s former foreign minister, the formula calls for elections to be held in Donetsk and Lugansk, with a view to granting autonomous status to these regions.  Kiev, Moscow, and the Organization for Security and Cooperation in Europe (OSCE) agreed to the formula in principle in October.

Heading into the talks, Zelensky maintained that such elections would only be possible under Ukrainian law, and once foreign military forces withdraw from Donetsk and Lugansk. The leaders’ communique did not touch on Zelensky’s conditions, but the Ukrainian leader said he is “confident” that the issues can be ironed out at future meetings.

Though Ukrainians have by and large supported Zelensky’s outreach to Putin, nationalists there see the Steinmeier Formula as capitulation to Moscow. As such, Zelensky faces the unenviable task of respecting these regions’ desire for autonomy and closer relations with Russia, while also pleasing the Ukrainian nationalists.

“For our part we are ready to follow all the agreements,” Zelensky said, “but this is a two-way street.” Given that these autonomous regions would share a border with Russia, Zelensky told reporters that himself and Putin have “completely different views” on the transfer of control of this border.

Monday’s meeting was the first face-to-face between Russian President Vladimir Putin and Ukrainian President Volodymyr Zelensky, and the newly-elected Ukrainian’s first major test on the world stage. In a brief comment to reporters before sitting down to dinner with all three participants, Putin said he was “happy” with how the talks went.

The four Normandy leaders – with both Ukraine and France under different leadership – last met in 2016, with the aim of implementing the previously agreed-upon Minsk Protocols for winding down the conflict. However, little progress has been made since toward this end. Times have changed since 2016 though, and unlike his predecessor, the fiercely anti-Russian Petro Poroshenko, Zelensky has pushed for reconciliation.

Kiev, Moscow and the Organization for Security and Cooperation in Europe agreed this July on a ceasefire in the eastern region of Donbass, and a landmark prisoner exchange in September furthered hopes of peace.

The Normandy leaders agreed to regroup within four months, a dramatically shorter break in negotiations than the three years that passed since the last meeting.

The group takes its name from the date and place of its creation: June 6 2014, when its members came together on the sidelines of the 70th anniversary of the D-Day landings in Normandy.