Senior Editor’s note: Though Jim and I write for NEO, one of the reasons we do so is so that Russians don’t write about American politics based on what they see on TV or read in newspapers.

This is another of those cases. In truth, the most powerful “stink tanks,” as DC insiders call them, Heritage, Hudson, Jamestown, are funded by the Kosher Nostra to support fake neocon blither that leads to false-flag terrorism, regime change and childish blaming of George Soros for causing it to rain.

[ Editor’s Note: Kulikov takes us on a deep dive into the Stink Tank (Stank) swamp. Take a deep breath, as you will need it to wade through the unpleasant parade below. In fact, hip boots might help.

The short story is that these stanks are stronger than ever in terms of their ability to build support for what their funders task them to do, laundering the fingerprints on the rigged outcome to make it all look like the honest work of unbiased academics.

Corporate media, even in the old days where they were not as bad, would not dig into the stanks’ shorts too deeply, as they had a symbiotic relationship. The media used them for “expert” sourcing in getting their geopolitical articles done and looking classy.

There is no way to get rid of the stanks now, as they are too deeply entrenched. It would take funding like they have to construct an “anti-stank” – a new batch of non-stanks that were not in the tank… Jim W. Dean ] 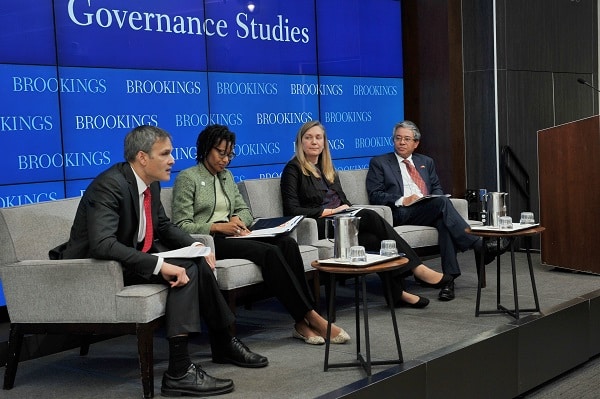 by Valery Kulikov with New Eastern Outlook, Moscow, and the Institute of Oriental Studies of the Russian Academy of Sciences, a research institution for the study of the countries and cultures of Asia and North Africa

For the longest time the so-called “think tanks” have been an indispensable element of the American political system. These days there are well over two thousand such “analytical centers” operating in the US, which exceeds the combined total in other major international players such as India, China, Argentina, Germany, and the UK.

The first noticeable spike in the number of think tanks across America occurred in the post-WWII years when such “analytical centers” assumed the duty of upholding the emerging unipolar world order within which Washington reigned above all other nations.

In fact, most of them were created primarily by the military, interested in developing a strategy for accumulating large volumes of politically relevant information, which would have been impossible without the employment of civilian specialists possessing diverse skill sets that allowed them to become proficient at geostrategic analysis.

Thus, in 1956, the US Secretary of Defense headed by Charles Erwin Wilson demanded that a total of America’s five largest universities join their efforts in establishing a non-profit research organization called the Institute for Defense Analysis (IDA). In less than a decade, this entity grew into a massive scientific institution employing well over 600 people.

In the 1960s, there were over 200 think tanks operating simultaneously all across America. The most famous and influential among them were the so-called “government-funded centers”, among them the RAND Corporation, the Institute for Defense Analysis, the Institute for Naval Analysis, and the Aerospace Corporation, all of which were directly supported by the US Congress, which would allocate up to 300 million dollars annually to support their operations.

However, in addition to those thinks tanks funded by the state, there was a rapidly growing number of privately-owned analytical centers that were funded by special interests who decided to use these entities to advance their own agendas, thus indirectly influencing American domestic and foreign policies by launching various campaigns.

There where various charitable foundations that came in handy, providing gifts and public donations and allowing their analysts to profit from various publications. During the period from 1957 to 1964, when the very term “think tanks” was coined, the total turnout of those entities increased to 15 billion dollars annually.

At the peak of the think tank craze in the United States — from 1960 to 1970 — more than 150 billion dollars were spent on their operations. Today, the budget of the RAND Corporation alone exceeds the threshold of 12 billion dollars a year.

Initially, this American think tank empire was used to overcome crises and develop long-term strategies, with custom-tailored recipes provided to American politicians for approaching various regions of the world. In the 1960s, they were tasked with finding solutions to the problems associated with the Vietnam War, the declining role of the US dollar in global financial markets and the internal instability of the United States.

That’s when globalist projects were born, which were designed in such a way that they would divert the attention of the general public from the most acute social problems at home.

Thus, by the end of the previous century, American think tanks turned themselves into an active decision-making tool in the US, as they were not just using “external financing” to advance the agendas of their benefactors, but were also capable of putting forward respected analysts supporting their cause, with the controlled mass media promoting their narrative.

The close interconnection of the large think tanks and the US government structures is confirmed by American politicians and businessmen changing high-profile positions within the government with positions in these entities.

From the point of view of political rotation, those think tanks serve as a training ground for future high-ranking officials of upcoming administrations, where the establishment handpicks and approves these figures who will eventually get elected. And while one party is in power, the other sends its front-liners back to the think tanks.

A vivid example of this phenomenon is the track record of Donald Trump’s former advisor on matters of national security, John Bolton, who at different periods of his political career was employed by three different think tanks – the Jewish Institute for National Security of America (JINSA), the Institute for Advanced Strategic and Political Studies (IASPS) and the Council on Foreign Relations (CFR).

Besides this, as you may know, he was Under Secretary of State for Arms Control and International Security Affairs under George W. Bush, a member of the New American Century (PNAC), and in 2007 joined the American Enterprise Institute (AE), that is also an NGO.

Upon receiving specific tasks from behind the scenes interests, elites and various departments, these think tanks began developing various foreign policy concepts, training experts and representatives while preparing public opinion for certain developments through the media, like the advancement of “color revolutions” or the reemergence of some “evil powers” attempting to compete with Washington.

Aside from the well-publicized example of the RAND Corporation, you can look at StrategEast, which is described as the strategic center for political and diplomatic decisions. The main stated objective of StrategEast is the development of programs for specific states on the basis of their susceptibility to various Western (American) values.

Behind this idyllic concept hides the following: StrategEast analysts collect information on the possibility of creating a pro-American society within targeted territories that are of interest to the United States.

For instance, from the mid-80s onwards, Washington was interested in the Soviet Union, and its republics, which resulted in the Baltic states, and then Georgia and Ukraine joining the list of US allies due to the programs developed by StrategEast. Today, they are busy researching the Central Asian states, so it doesn’t take much imagination to predict what will happen next.

In the initial stages, StrategEast programs provide a recipe to drive a country away from its traditional cultural values, so that it can be turned into an anti-Russian stronghold (as was done in the Baltic countries, Georgia, and Ukraine) or into their anti-Chinese equivalent (like is happening now with the countries of Central and Southeast Asia).

In Central Asia, for example, American “experts” have begun to impose the idea of translating the national alphabet from Cyrillic to Latin under a very strange pretext that it would then make life easier for local Internet users (while failing to explain why the incredibly complex Japanese and Chinese characters do not impede the ability of users in Japan and China to use the Internet).

In parallel with linguistic and cultural Westernization, the local public is being prepared for the possibility of massive protests so that it won’t object to “color revolutions” that engineered to follow.

As we’re witnessing the new Cold War going into full swing, there must be an objective assessment of the activities of US think tanks, as their “concepts” and “projects” should be approached with a clear understanding of the fact that they advance certain interests that do not necessarily correspond with the national interests of other countries.