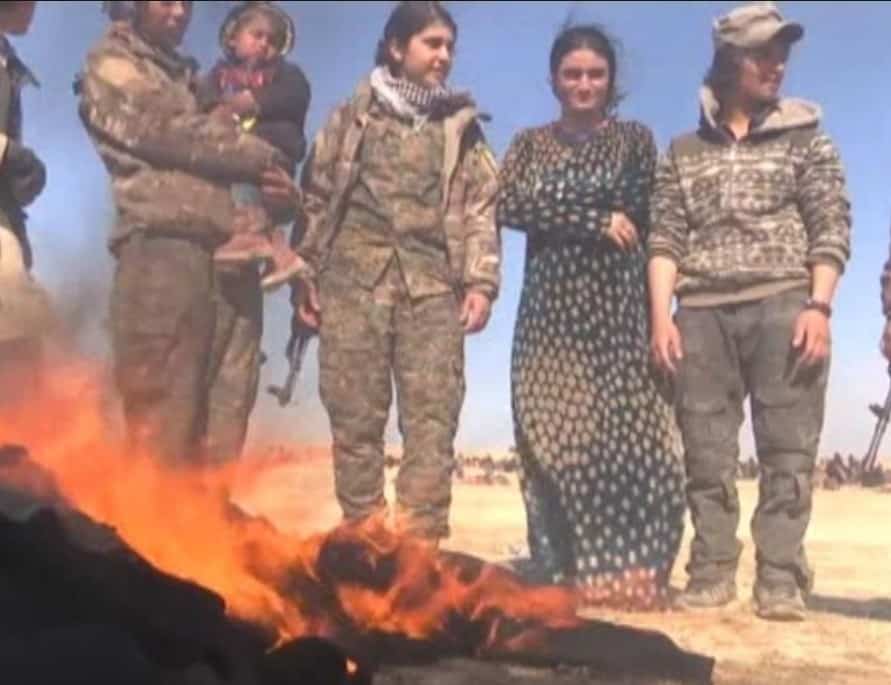 It turns out that it is very difficult to get to Syria or another hot spot in the Middle East. Is it true that they immediately give a lot of money and many benefits, including 50 virgins? What happens to women who find themselves in such places?

“Unusual week” with Inna Novikova and Yuri Zinin
Yury Zinin, senior researcher at the Center for Middle East Studies at MGIMO, told Inna Novikova about this to Pravda.Ru chief editor .

NATO – Turkey: who needs who more

Baltic states awaiting attack. When will you get tired?

How Maidan influenced the Middle East

Russia in migration policy repeats the mistakes of France

Drunken driving is a problem. The complexity of checks is even greater

– Yuri Nikolaevich, continuing the conversation about terrorist fighters in Syria and the entire Middle East, of course, it must be said that there are fanatics and mercenaries from all over the world, including from Russia. Of course, they are also used for propaganda, including making films with allegedly Russian military for provocative purposes. As you said, there are women there, including ours. We remember that even a student at Moscow University, Varvara Karaulova , went there to join the Islamic State group, banned in Russia *.

– Yes, but this is still a special case, here the role was played by her purely internal, mental perception. Of course, terrorists everywhere are trying to recruit people, but I don’t think it would be widespread, although such attempts have taken place and continue. Here, the calculation is made on some youthful, youthful desire to oppose themselves to general trends, mainstream trends, to stand out with something, play with something.

Young people are always characterized by a certain romance, disbelief in adults, a desire for thrills. Here, as they say, even the count on the head is comic, but I still check it myself or myself. These things can be, of course. But I would not consider that this is some kind of mass phenomenon, that almost everyone without exception is infected with this.

Apparently, these are still separate, rather rare phenomena. And this as a whole, of course, is already ending. But even earlier, even just to go there and get to the destination was not an easy task. I can’t even imagine what and how they needed to do this, although I worked a lot in these countries.

It’s even harder on the spot. Firstly, it is difficult for our people there climatically, and secondly, in terms of language. As an Arabic translator, I couldn’t always clearly understand what they were talking about, because there are a lot of dialects. How is it to go there without knowing the language at all, and still take up arms? Generally unthinkable things! How can one live there? What language to speak, well, I just don’t know …

– They somehow drove through Turkey, they were helped in this.

– Well yes. But this is also connected with the life of people, with communication, with the receipt of all kinds of documents. And it is impossible to imagine that, without knowing the language, not knowing the culture, the real situation and everything else, a normal person would decide on this. And in any case, one must understand that there, a newcomer, whoever he is, becomes a man at the lowest step of the ladder. And if he is a stranger, does not understand the local language, he is generally looked at as some kind of slave.

“But there have been, and probably still are, some recruitment channels.” And people do this professionally, promise a lot of money and all sorts of benefits, including 50 virgins.

“But you don’t need to know the language, they will be given a machine gun or a martyr’s belt – and go, defend, attack, kill …”

“Go,” so you also need to know where to go, what to do, how to do it, how much, what and how … This is also not so simple. At a minimum, it is necessary to explain and direct. Yes, you can use gestures, of course, but not all and not always, and usually this is not the best way.

– May be. I just don’t want the impression that you took it, left and came there and all this is easy and simple. It is actually very difficult in real life. All this is very difficult, even to integrate and understand what people say there.

“Have you come across, heard about such people, talked with those who went there, or tried, or whose loved ones went?” Are you in charge of ISIS *, which is banned in Russia?

– Well yes. I had such cases. I worked in some countries, for example, in Tunisia, when there was a difficult time. There were several of our guys from the Caucasus who studied in local regions in institutions. Every evening they came to the Russian Cultural Center and watched a movie, because there they could not find anything interesting.

Here they were students, and every evening they came to our cultural center and had fun there, watched a movie, participated in other events. You see, all the same, there is its own very narrow and strict system of clans. There you need to enter into friendship with someone to become more or less your own. But everything is very difficult to do. Some obligations need to be fulfilled, something else to be done. It’s all very complicated, you know? …

Some of our women also got there. But they are generally mostly widows.

“There are options here.” They are, as it were, not entirely widows, but as the Islamists themselves declared: “We have no widows.” What plan is there no widows? Now, if, for example, a man is killed, then his wife is automatically transferred to another. Although this also completely contradicts all the laws of Sharia, Islam. And after some time, she again falls into the same situation when her roommate is killed or disappears.

She is thrown to the next, and she is forced, because someone has to feed her. Some have many children, it is not known from whom and even what nationality the father was. And this happens all the time. In general, this is already some kind of degradation, decadence …

Someone, perhaps, was deceived by their propaganda, slogans. Of course, these pictures can be shown there, there are television masters who show the picture – some kind of house is big in a beautiful place and everything else. But in general, people live there more than modestly, and even more so if the country is in such a situation … And suddenly a new person arrives, what is he there at all? … Therefore, I look at this with skepticism.

Prepared for publication by Yuri Kondratyev