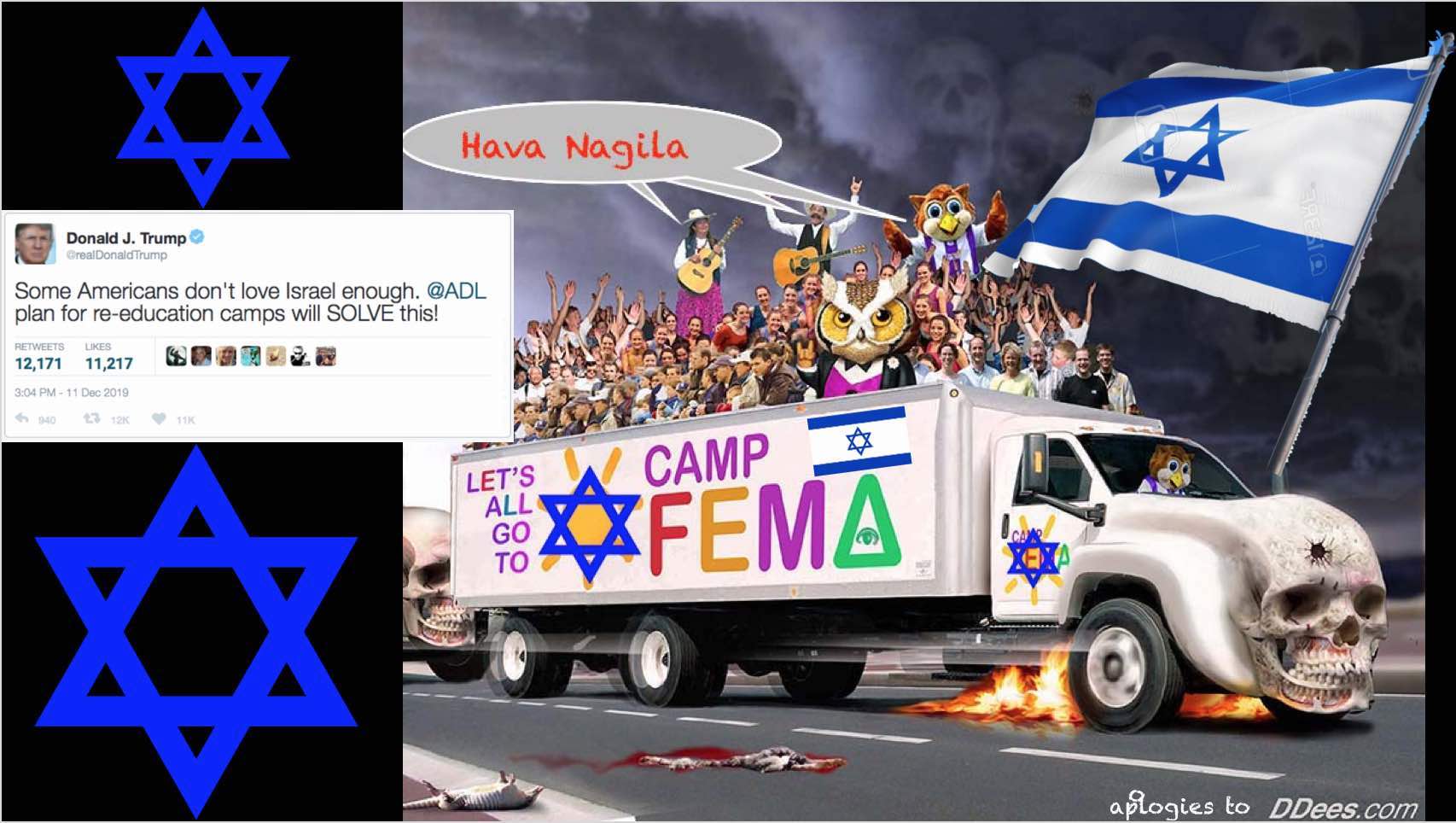 In the wake of President Trump’s executive order banning criticism of Israel on college campuses, the ADL has unveiled a plan to send violators to re-education camps—and Trump just tweeted his approval. The plan calls for the US Army Corps of Engineers to repurpose dozens of derelict strip malls, Wal-Marts, military bases, and sewage treatment facilities as re-education camps tasked with helping critics of Israel overcome their destructive habit and become productive members of society.

“Critics of Israel may be subhuman goyim who must ultimately be enslaved or exterminated,” ADL spokesman M.M. Schneerson explained, “but they deserve a chance at rehabilitation…at least until the Messiah comes, at which point all bets are off.” The ADL plan envisages an initial round-up of 500,000 critics of Israel, with subsequent follow-up efforts aimed at filling the camps to capacity, with the target number set at roughly six million.

Under the Trump-ADL plan, the Chinese contractor Chī shǐ will be hired to run the Love Israel VEry Much OR Else (LIVEMORE) camps modeled on the Uyghur reeducation camps in East Turkestan. Inmates will rise before dawn to salute a giant Israeli flag and sing patriotic Zionist songs. They will be given vocational training aimed at developing qualifications for work in the booming Israeli-dominated tech and communications sector; most will be trained to become professional Zionist social media trolls. “With the help of such advanced learning techniques as electric shocks to the genitalia, even the most hardened anti-Israel recidivist can easily be rehabbed into a productive, fully-employable troll,” explained ADL spokesperson Hava Nagila. “As the saying goes, if you feed a goy Zionist propaganda he eats it for a day; but if you train him to pump out Zionist propaganda professionally, and pay him a few shekels an hour, he’s yours for a lifetime…or at least as long as you keep paying him.”

Along with vocational training, the LIVEMORE camps will feature first-rate recreational facilities. In their spare time, inmates will play highly realistic video games in which players compete to see who can bulldoze the most Palestinian homes and kill the most Palestinian women and children. And once a week they will get to visit Joy Division, where the fruits of Israel’s leadership in the fields of narcotics and human trafficking can be enjoyed under IDF supervision.

Though it is expected that most inmates will be successfully rehabilitated, separate facilities for those deemed incapable of productive pro-Zionist work will also be constructed. These will consist of gigantic airtight shower rooms with plumbing connected to hydrogen cyanide gas lines. If the shower rooms fill to capacity, incorrigible critics of Israel will be loaded in the back of diesel vans with faulty exhaust systems and driven somewhere where they won’t be able to interfere with the Jewish people’s sacred right to self-determination ever again.

Despite such occasional re-education failures, the ADL expects that most inmates will, in the end, share the fate of Winston Smith: