Having written this late at night, and such things are reflected in anything gloomy, as this might be categorized, a short review during the day is advisable.

First of all, the assessment here is as good as anyone will find, as real as we can confirm with no ‘delves’ into fantasy or dot connecting.

We admit that we at VT were looking at putting together a parallel of Chris Steele’s operation.  We have better Russia sources than he does, much better, better Ukraine sources and Steele, decades younger than many of us, has no “real time” Cold War credentials.  VT folks held senior positions.

Frankly, we were looking for a bit of boat, motorcycle and airplane money for very little work, albeit much better than would otherwise be available.  The only real offer we had during the campaign came from the Trump people but that went away as well, it became clear that the Kosher Nostra has no need for experts when a cudgel will do.

What is here is mine but collective also.  Even the FBI ended by admitting that my/our capability in tradecraft and intel analysis was well beyond theirs and sought to bring us onboard.  I hate to think of what happened to the head of the field office who presented that to the Director, transfer to Greenland is usually the issue.

Let us take a look at one minor thing, one I am sure put Robert David Steel off Trump for good, the executive order to “protect” Jewish students through ending free speech on all American campuses….more than it had already been.

Meaning?  Hollow effort meant to humiliate the US, to shit in our tea as it were, nothing else.  Jewish students don’t want to be tied to “special treatment” by the Nazis, their grandparents saw how that worked out.

Now Orange Man Donnie protects them the way he protected Epstein with one exception, the issue is BDS, the Israeli boycott, which is, of course, run entirely by Jewish students who are now under presidential ban from speaking freely about Israel’s actions. 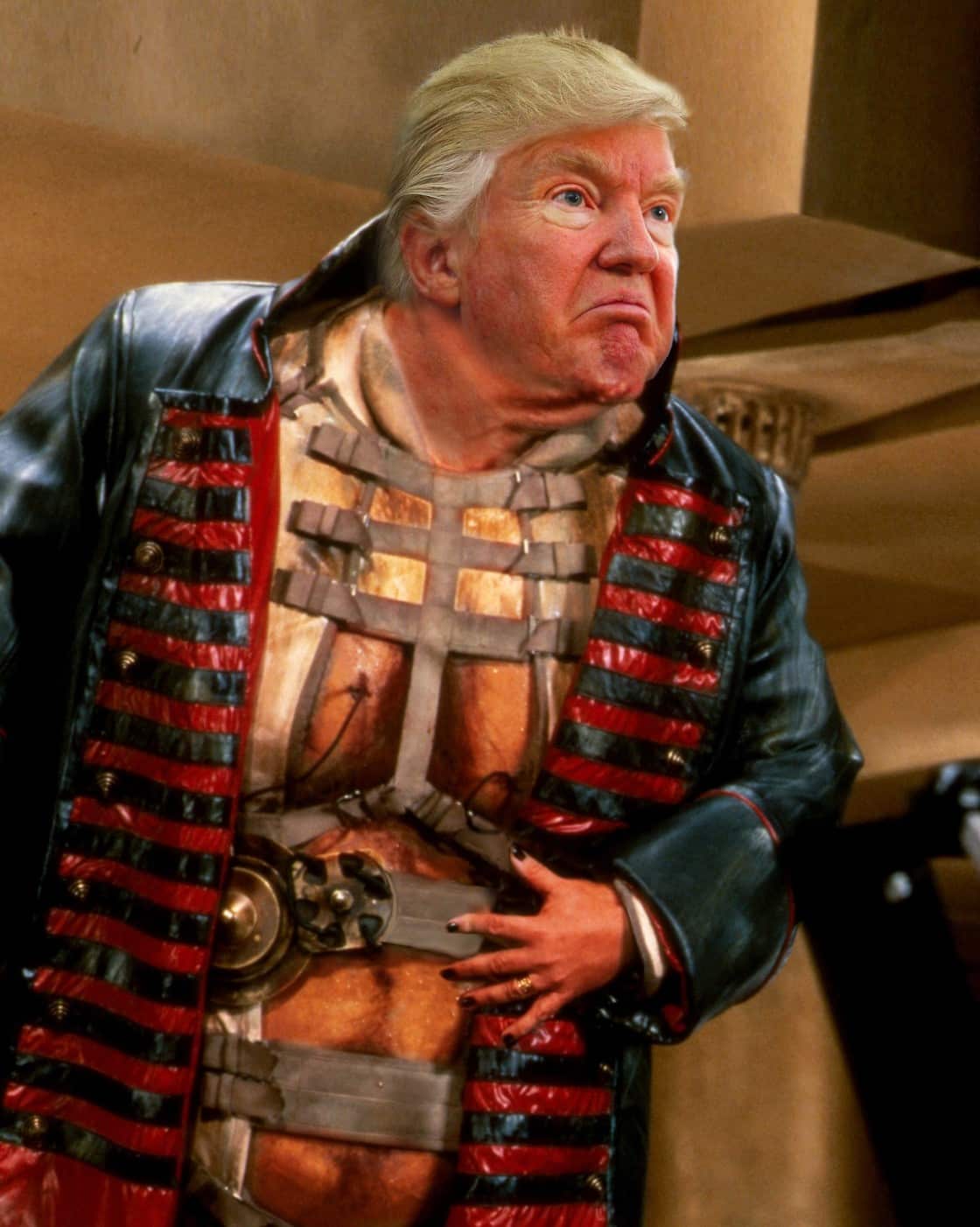 “Thanks dad.”  Whenever I see Trump, something close to Jack Hearts’ own heart, I think of Dune and the “Floating fat man,” of the Harkonnans.

I have been reviewing the declassified documents, a nasty and tiresome project, from the inspector general and from the hearings on the FBI and Russiagate.

I first became involved in Russiagate, as it was wrongly called, in my opinion anyway, in 2015 when VT analysts (former US and Soviet psych war specialists, in this case a pair of Colonels) identified a “third force” involved in creating a fake narrative around Hillary Clinton.

VT insiders tied to Thomas Mattingly, a Washington attorney (and VT editor) later murdered…and now we know why, approached Hillary’s campaign informing them that what was made to appear to be election rigging by Russia, run through Google Corporation, Israeli intelligence, Turkish intelligence and the Kosher Nostra, was active.

We also pointed out that, based on collective experience the public is only aware of in an ancillary way, this is only one prong of a rigged election but something more.

Our effort, will Hillary’s folks, Podesta and gang, was to at least bring them up to speed and to put a team led by lawyers already working on Hillary’s campaign to start taking a real look.  We told them the hammer would fall.

Arrogance?  No one on Hillary’s campaign had a clue how to do opposition research, how to track internet/social media manipulation and attacks, there was absolutely no such capability, well into 2016 on the campaign at all.  They thought they had it won and didn’t care.

They didn’t hire Christopher Steele and Hillary had absolutely nothing to do with the dossier.  No democrat did.

In fact, these were some of the stupidest people I had ever spoken with and that’s saying a lot.

Later, when things went the wrong way, the crybaby dem’s through Politico, the Hill, the WaPo (we later made peace) and Newsweek (a despicable rag), ran to the FBI to rat out VT, and Jim and me.

This set the FBI’s Washington field office on me, the same team who went after Michael Flynn.  Robert Steele loves Flynn and I think he was right on some issues in Afghanistan but we also knew he had hooked up with a Turkish gangster for a huge payout and was totally “on the make.”

The agents who investigated both of us, the same team, were told to expect me to be like Flynn.  I was not.  None of us at VT are.

What became increasingly clear is that the FBI at the highest level, perhaps beginning with Comey and moving onward, was running Russiagate as a two-state operation, one to silence the press through threats, which obviously didn’t work with those of us who didn’t take Kosher Nostra cash (VT alone..nobody else) and to provide cover for those who really rigged the election.

A review of hearings has made a few things clear.  The FBI knew all along that Trump was dirty.  What they thought was that he was working for Russia.  As they explained it to me, their working hypothesis is that all money going into Trump is from “Russian” oligarchs who are directly run by Russian intelligence and all are directly answerable to Putin only.

This could be true.

A typical opposing position, as every “oligarch/gangster’ that Trump works with is Russian-Ukrainian but also an Israel citizen is that “the Jews did it.”  Except for this, American Jews broadly backed Hillary.

She got all the “normal” Jewish cash while 100% of the mob money went to GOP candidates across the board, as is always the case.  The GOP is totally mob controlled.

As for who Hillary is, we really don’t know.  She was a poor candidate and lacked foreign policy vision and the proper politics to clean up America, meaning eliminating college debt, medicare for all, the things we see from Sanders, Gabbard and Warren.

Biden and Bloomberg are the “placekeepers” of the old guard who would restore America’s world position but never address the problems that Trump only represents a portion of.

What I had a chance to do with the FBI was dissect their unintentional but fake investigation and, sharing information with Chip Tatum and others, see that everything in social media, the press, what is reported from congress, all of it is written like bad Shakespeare, fake narratives one upon the other.

Where the sad part comes in is this.  I have had the chance to talk with young people I like, DC investigators, who just aren’t trained for intelligence work and who don’t realize that the Cold War never ended but rather that Russia fell into the hands of gangsters whose focus and brilliance, whose brutality and attention to detail is beyond their capacity to understand.

They were trained to play checkers, we are being done in by a classic game of 3D chess.

Fueling it is the swamp.

As for Trump, he had been profiled by the Kosher Nostra long ago as a vehicle for money laundering, an inheritor of the Roy Cohn/Meyer Lansky/Bronfman criminal empire which was a bare shadow of what arose when the Soviet gulags opened their doors into Israel and the United States, gulags still emptying into the US through Kushner’s visa selling deals, bringing in people with endless cash from drugs and human trafficking and a brilliance and focus not seen in America, the land of the soft and lazy.

What do we see in Russia?  Were Putin and company, men whose words and some of their actions are credible, really in charge, Trump would have left Syria, Turkey would never have been allowed to move in and Israeli planes would not be bombing Damascus 3 days a week.

In nation after nation we see a failure of governance, with struggles only between opposing criminal operations, fighting over rare earth elements, suppressing green technologies, “robotizing” the world through 5G and AI and turning the human race into cattle.

Those you will never know or hear of, the supposed “elites,” when questioned have one thing to say, that the power they once thought they had is gone and that something ominous is over the horizon, something that they all hope will come only after their death.