One of the great wonders of gothic architecture, there is an almost palpable evil inside Stephansdom; a heaviness of the air. Shadows of forlorn sorrow and unspeakable despair seem to lurk in corners too dark to be clearly seen…

A malevolent presence stalks the aisles at the periphery of the senses — something dark and as old as time itself feeds like a vampire on the immortal souls of its unsuspecting supplicants.

“In the early hours of 10 April 1945,” legendary SS Commander Sepp Dietrich, the Commanding Officer of the retreating German forces in Vienna at the time, gave the order to Captain Gerhard Klinkicht, commander of his field artillery, to “fire a hundred shells, more if necessary and leave it in debris and ashes.”

Klinkicht has been immortalized today for disobeying those orders leaving Stephansdom preserved for posterity.

Lost in the adulation is the fact he contributed over a hundred and fifty thousand euros to its restoration during his lifetime. The last seventy thousand was a check given to Christoph Cardinal Schönborn, just months before Klinkicht’s death in 2000. (1)

Josef “Sepp” Dietrich was one of the most if not the most powerful man in the SS.

As Hitler’s personal bodyguard and chauffeur, he literally fought his way to the top, first in the streets at Hitler’s side, and later the battlefields of Europe as the Commander of Leibstandarte SS Adolf Hitler (LSSAH); a tank unit and the most feared military division of WW II.

In Lucifer’s Court, Otto Rahn states that Dietrich is the key and Dietrich in German literally means key.

In fact, the Unit Insignia for the LSSAH was a key…

It was Dietrich who was responsible for financing Otto Rahn and Karl Wolf in southern France during their 1931 quest for the Holy Grail amongst the “grottoes of the Sabarthes.”(2)

“Wolff, who had won the Iron Cross in WW I when he was just eighteen years old, would go on to become General Karl Wolff, Supreme Commander of all SS forces in Italy or just plain Wolffie to Himmler.” (3)

It can be argued from both accepted historical fact and evidence produced in Titthakara and Otto Rahn, Hidden Master or Madman that these three men; Otto Rahn, Sepp Dietrich and Karl Wolff formed a hidden triad of power in the SS above Himmler and were answerable, perhaps, only to Hitler himself.

After the war, Dietrich would shoulder the blame for the Malmedy massacre — a war crime to which he had little or nothing to do with, in order to shield his subordinates. He was sentenced to life, which would be shortened to twenty-five years, due to testimony in his defense by other German officers. He would end up doing ten years.

Dietrich was a man of unimpeachable integrity and bravery, and Klinkicht’s tale that he ordered the destruction of one of the world’s greatest architectural wonders – built by the German people – out of spite because Vienna had surrendered too easily to the Russians just doesn’t wash.

In fact, it reeks of the Empire’s cartoonish historic fabrications that have been used to conceal and obfuscate the facts about WW II — why it was fought and who was fighting it.

Perhaps the gullible Dietrich, yet another dumb German brute, had been duped, tipped off by yet another incredibly clever British OSS agent posing as an anti-Semitic monk — Ann Frank was hiding in the attic of Stephansdom… 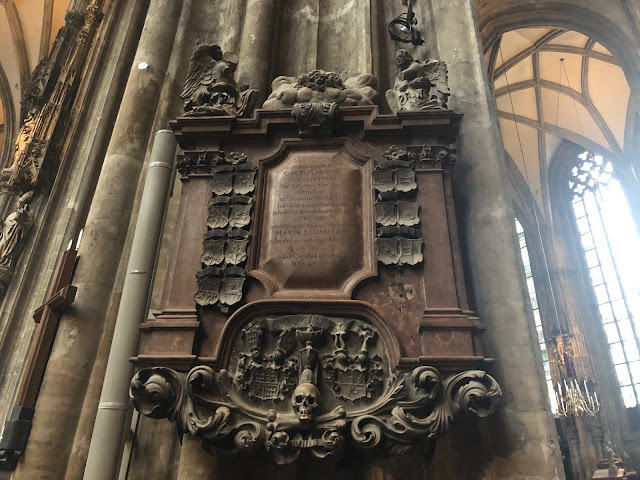 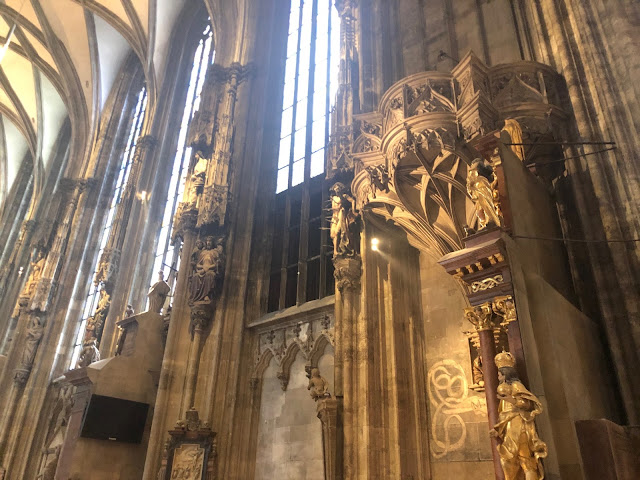 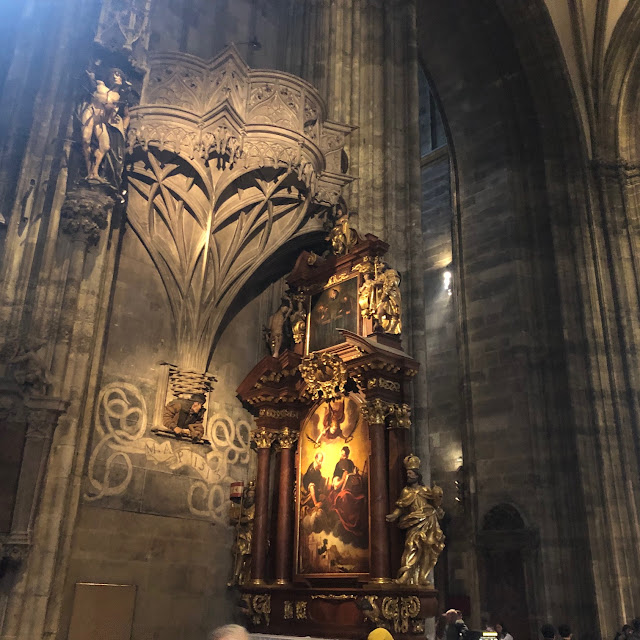 Upon entrance into Stephansdom through the doorway under the two smaller steeples, if one takes the left-hand path toward the altar in the front and keeps the larger steeple outside to the rear right, one is greeted by a leering skull and crossbones.

The skull, some of its teeth missing, wears the headdress of the pope. Balanced atop this headdress is an inverted darker version of the headdress. The ghoulish pope and his dual hats for good and evil are just the focal point for a large, decorative tablet adorning the wall, and inscribed with some Latin mumbo jumbo…

The center Isle is gated, and one must pay the monks to continue to the main altar beneath the stained-glass windows high above. But, continuing down the aisle to the left, the aisle ends in an enclave about halfway to the altar, and you find yourself face-to-face with a strange painting.

The masterpiece is illuminated by overhead lights, and is flanked on each side by a statue of a king standing beside twin pillars; the king appears to be presenting the painting to the audience.

From the wall next to it, a startlingly real carving of a medieval monk seems to be emerging from a window in the wall and is studying the painting intently.

The painting depicts two ancient scribes perched on a cloud, and who appear to have discovered something in a manuscript. An angel descends upon them, delivering a feathered quill to each of them. Below them in a citadel surrounded by mountains, a dark and shadowy figure gazes out from an open terrace.

Flanking the window directly in front of the painting, a statue of Jesus sits in the posture of an enthroned king, the crown of thorns upon his head. A demonic dwarf sits upon each of his shoulders whispering in his ear.

On the other side of the window, closest to the painting, Jesus still wearing his crown of thorns but now standing and stripped naked is riddled with arrows. Atop the twin pillars flanking the painting on the right is a courtesan, and atop the pillars flanking it on the left is a swooning, naked woman. She is girded about the loins by a serpent and an arrow pierces her heart.

At the top of the abomination sits a high priest garbed in black. Whatever it was the scribes found in that manuscript, the directive is now clear. Jesus and Mary must both be killed, and it falls on the church and the kings of the earth to do it…

Throughout our writings, we have continually referred to David Lynch’s Twin Peaks. That is because its symbolism constitutes the most all-inclusive work on the occult, the esoteric doctrines behind populist religions like Christianity, and the deepest darkest secrets of Synarchy that have ever been presented to Samael, the blind gods’ world.

They meet in a place called the Red Room, a place out of time and at the crossroads of the portals, hosted by a malevolent dwarf and a benevolent one-armed man. The Red Room is most noted for its floor, tiled by an off-white and dark-brown chevron pattern. The floor of Stephansdom is the very same off-white and dark-brown colors, but in a checkerboard pattern. The famous roof of Stephansdom is a chevron pattern in light and dark colors… 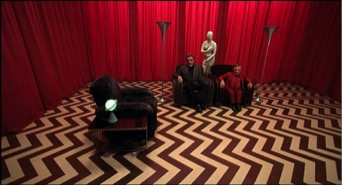 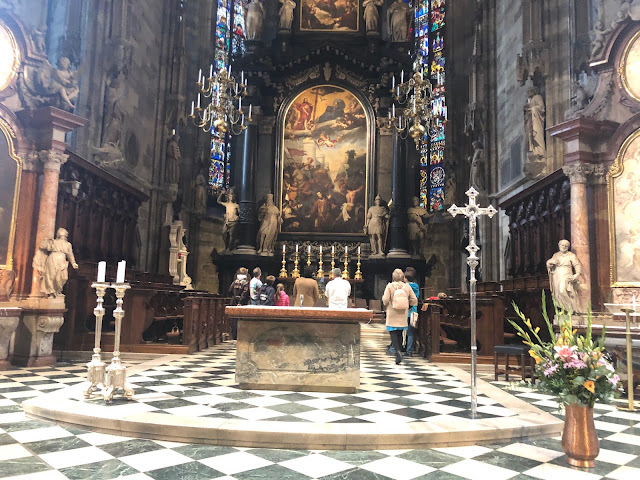 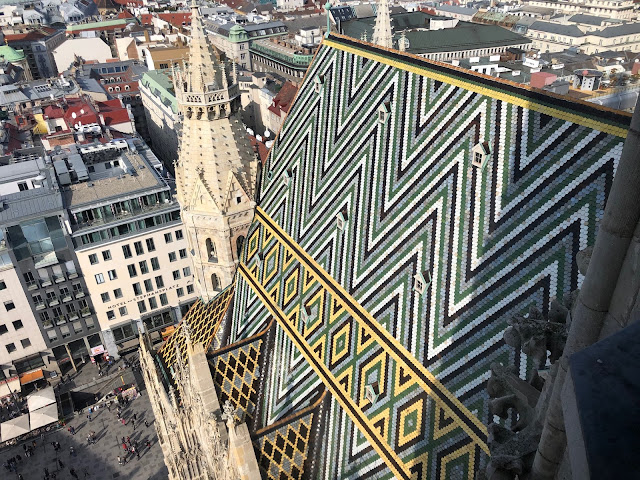 2 – Rahn, Otto. “ORNOLAC IN THE LAND OF FOIX.” The Court Of Lucifer A Voyage With Europe’s Benevolent Ghosts By Otto Rahn.pp 36-37.

Author Details
Jack Heart
Jack Heart, pen name for George Esposito, is known for his extensive research and writings that provide high-quality information and authentic alternatives to mainstream narratives on a wide variety of subjects. His life experiences make for a highly intriguing perspective.

Read Jack’s Full and Complete Bio >>>
[email protected]
ATTENTION READERS
Due to the nature of independent content, VT cannot guarantee content validity.
We ask you to Read Our Content Policy so a clear comprehension of VT's independent non-censored media is understood and given its proper place in the world of news, opinion and media.