[ Editor’s Note: Haitham Ali Ismael was a good guy. It seems that as the man of the house for his mother he should stand up to the protesters that had been making the neighborhood miserable with their endless protesting.

That was a mistake, as he misjudged their being protesters. They were a mob; and mobs are dangerous as they feel unaccountable for their actions in numbers. Cutting the throat of a corpse and lynching it for fun while thousands of “good Iraqis” stood around and watched makes one wonder why should Iraq be saved.

There are many other Haithams in the ongoing tragedy; people who were killed with a type of military grade teargas canister that Iraq did not have in its inventory, and something that ran the death count way up and was easy to blame on a government that was slow to catch on and did not publish the findings for weeks.

The police standing by and doing nothing does not bode well. It sends a message to the mob that they are primarily interested in keeping their paychecks and will be no problem for the protesters doing more of this.

There are strong indications that the protesters are being paid to protest. Iraqi security must be aware of this but can’t really do anything to stop, and do not want to put their impotence on public display.

Haitham Ali Ismael has made it public. We have an outside funded entity wanting to take down the Iraqi government and then step in with tons of money to make sure it gets a puppet regime in Baghdad. Gosh, who might that be?

After all the money the Saudis have pissed away in Yemen, this protest money would be peanuts, and you can bet a small country in the Middle East laid a good plan out for them, as something to make the SA Royals feel better after being beaten in Syria, Iran and Yemen. It could not have happened to anyone more deserving.

That said, Iraq has shit on its own people for so long it has lost any moral claim or right to rule. But Iraqis are by no means the only ones in the Arab world doing this, and outside the Arab world, also. Welcome to that world… Jim W. Dean ]

A group of “protesters” in Baghdad have, in an extremely brutal and shocking way, stabbed to death and cut the throat of a 16-year-old teenager before hanging him by his ankles. 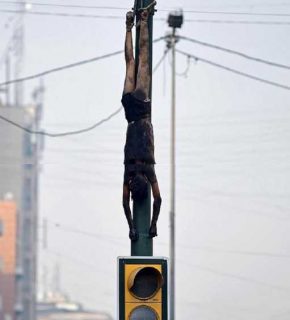 The boy, identified as Haitham Ali Ismael, had been berating the protesters for three days for obstructing the street beside his house and making noise, but he had been largely ignored.

On Thursday, witnesses said, he climbed up onto the roof of his house and began shooting in the air with a pistol in order to shoo the protesters away from his family’s home.

That prompted a mob of protesters to barge into his small house at the edge of the Al Wathba Square where Haitham lived with his mother and stabbed him for 17 times.

Then they took him outside, pulled off his clothes, dragged him bleeding through the streets, hung him by his ankles from a traffic light pole and cut his throat.

Fadhil Muhammad, a tuk-tuk driver, says he “was standing there when they hung this young man by a rope and tied him to the pole and then the rope was cut and the victim’s head fell on screws on the ground in the street and they entered into his head.”

Then they threw the boy on the bed of a police pickup truck, Muhammad said, “and in front of the police they began to slash his neck.”

In videos of the scene, Iraqi police officers can be seen hurrying through the square as if they were disturbed by what was going on but perhaps afraid to interfere.

Interior Ministry spokesman General Khalid al-Muhanna denied allegations on some Iraqi websites that the riot police had entered the boy’s house and perhaps participated in stabbing him, but he did not respond to criticism of the absence of any effort by police to stop the bloody free-for-all.

Alarm bells have started to ring for Iraq where a series of suspicious events have raised fears of the country slipping deeper into violence and chaos.

Analysts and officials believe the wave of recent unrest in Iraq stems from an “international and regional conspiracy” against the government and people in the Arab country, and that the violence and chaos is aimed at bringing the former dictatorship back to power.

Nearly two months of protests have, primarily, rocked Baghdad and the southern areas of Iraq. The protesters have been expressing frustration with a failing economy and have demanded reforms.

Who is promoting ‘mini-state’?

Western media and the Saudi-owned newspaper Asharq al-Awsat recently reported that some of the protesters have created what they call a “mini-state” in Baghdad’s Tahrir Square, offering the kinds of services they say their government has failed to provide.

The Tahrir Square encampment is reportedly a protest movement that seeks the radical overhaul of Iraq’s political system.

“We’ve done more in two months than the state has done in 16 years,” said Haydar Chaker, a construction worker from Babylon province, south of the capital.

Everyone has their role, from cooking bread to painting murals, with a division of labor and scheduled shifts, Asharq al-Awsat reported.

Sa’ad al-Muttalibi, an Iraqi parliamentarian and member of the State of Law Coalition in Baghdad, recently told Press TV that Saudi Arabia is playing a certain part, financing part of the demonstrations that have brought Iraq into chaos.

He also referred to Israel as a main manufacturer of the conspiracy. “Israel has been planning this for years alongside the Americans and Saudis, just they are not intelligent enough to create something like that but have the enough money to finance that.”